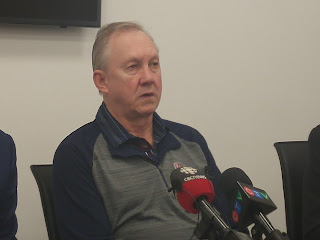 Paddock joined the Pats ahead of the 2014-15 season as Head Coach and General Manager. He has guided the Pats to a record of 149-83-19-12 in three plus seasons. The club has reached at least the second round of the playoffs in each of those three years, including a trip to the 2017 WHL Championship Series. In 2016-17, Paddock led the Pats to a franchise record 52 win season and the Scotty Munro Memorial Trophy as regular season champions. Twice in the last three years, Paddock has been named WHL Coach of the Year and in 2017 also received Executive of the Year honours.

“We are very excited to extend the contracts of the leaders of our hockey club,” said Pats President Todd Lumbard. “The track record of our team both on and off the ice over the last three and a half years speaks for itself.  Their hard work, knowledge and care for our players and our community bodes well for the future of the Regina Pats.”

Paddock is a member of the American Hockey League Hall of Fame, he has won three Calder Cups as a coach and two as a player in the league. Paddock played in 87 NHL games, scoring eight goals and 22 points, he also played in 462 games in the AHL, amassing 282 points and 1235 penalty minutes.

“It’s an honour to work here in Regina,” said Paddock. “We have the best ownership group in the league and I am excited to continue the work that was started four seasons ago.”

Struch, also joined the Pats ahead of the 2014-15 season and has played an integral part in building the club into a contending team in the Western Hockey League. Struch is in his 12th year of coaching in the WHL, his fourth with the Pats.

“I am very honoured and privileged to remain a part of the Pats family,” said Struch. “My family and I have been treated very well here and we look forward to the future.”

Struch was drafted by the Calgary Flames in the 1991 NHL Entry Draft and appeared in four games. Struch played 13 seasons of pro hockey in North America, Italy, Germany and Austria.

Brad Herauf joined the coaching staff before the 2015-16 season and is in his third year with the Pats. Previously he was the head coach of the Regina Pat Canadians, leading them to a Saskatchewan Midget AAA Hockey League Championship in 2015 and a bronze medal at the Telus Cup.

“I am excited and honoured to stay with the Pats going forward,” said Herauf. “I grew up watching this team and getting the opportunity to coach here means a lot to my family and I.”

How many coaches did dumbass Parker go through? How do you build stability? Oh wait, his lack of success showed that.

Marquart and company know how to run a team. Russ and Brent did not! It is as simple as that!


WOW!!! Really surprised Strooshie committed for that long. I am guessing he could coach anywhere in the league and be a GM too.


Everyone thinks the Pats will be doormats for years to come after MC. I think Paddock just laughs at that notion. They may not be good next year, but like Brandon, Kelowna, etc. etc, they won't be out of it for long.