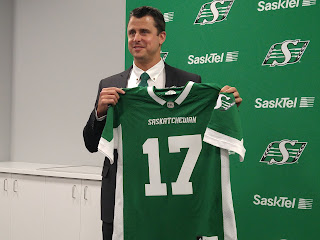 --Quarterback competition or quarterback controversy? As soon as the salary of new Rider QB Zach Collaros was made public, you could hear the buzz start.  Is he worth the money? Why are the Riders paying him so much? They should have just made Brandon Bridge the starter.  You could hear it from some factions of the always-divided fan base.

Bridge didn't help the matter when he went to Twitter saying he was upset now upon hearing what Collaros signed for and said he learned a lesson. Yes he did learn a lesson, and it is a hard one to take but one that he will learn from.

I was not the only one surprised when Bridge signed before free agency. He was seen at the end of the season as one of the more attractive players out there going to free agency. Why wouldn't he be after the way he played in 2017.  He's a guy who is an up and comer, and while I don't think he is starting material yet, he is close.  He needs just a little more seasoning with an experienced quarterback in front of him.   That is what he had last year and that is what he will have this year.

While it is seemingly the case every year in these parts, it puts a tremendous amount of pressure on Collaros to succeed. Bridge is the flavour of the week. He is the back-up quarterback and that back-up is always the most popular man in Saskatchewan.  For years, it has been give  (insert backup quarterback name) here a chance. He has shown he can do the job.   As soon as Collaros starts to struggle, which I am sure he will at some point as most quarterbacks do, the calls will be out and they will get louder and louder.

--Labour Day Weekend has the potential to be more salacious than usual with the Darian Durant signing in Winnipeg.  Rider Nation will go ballistic if for some reason Durant plays and has a big game with Weston Dressler.  One can only imagine.

--The New England Patriots were down 10 in the 4th quarter. They didn't have Rob Gronkowski in the lineup thanks to a concussion and they had the ball 3rd and 18 in their own territory.  In other words, they had Jacksonville right where they wanted them.  When Tom Brady hit Danny Amendola for 21 yards and a first down, you knew what was going to happen. You have seen it so many times in the past.  New England went down and scored a few plays later and then got the winning touchdown late to beat a plucky Jaguars squad that probably deserved better.

--Wasted miracle!  We all may owe an apology to Nick Foles and the Philadelphia Eagles.  After a bad start, they destroyed the Vikings from pillar to post in a game that shocked me.  The pick six by Patrick Robinson changed that game around completely. I didn't see Philly doing that.  I don't think a lot of people did.  It sets up an Eagles-Patriots Super Bowl.  Philly wasn't supposed to beat Atlanta, they weren't supposed to beat the Vikings and not many will take them to beat the Patriots.  Maybe they have New England right where they want them.

--The Vegas Golden Knights are the number one team in the NHL on January 22nd?  Amazing!  They can't be considered as a serious contender for the Stanley Cup can they?  Yes they can!

--I believe it was Elliotte Friedman of Hockey Night in Canada who threw it out there that Jets forward Blake Wheeler should be in the conversation for Hart Trophy winner. I can't disagree.  Since Mark Schiefele got hurt, Wheeler has taken his game to another level.   Is anyone talking about Nathan McKinnon as an MVP candidate? If not, they should!

--Its not back to square one for the Pats, but losses to Moose Jaw and Saskatoon on the weekend has brought the team down to earth somewhat after some solid play coming out of the trade deadline.  John Paddock's statements following Friday's game against the Warriors were very accurate.  Moose Jaw came out with a message to send and they sent it.  The Pats see where they have to be if they are to beat their Highway 1 rivals.  They will see them again a few times before the season is over, and they will be more in sync as a unit.   Whoever gets out of the East will have a lot of work to do and will have to rid themselves of two teams that will be tough outs.  Playoffs start when?

--The Cougar women's basketball did the expected on the weekend rolling over Brandon twice including putting up a school record 118 on Friday.  The men's team split with a pretty cocky Bobcats squad who once again don't have a single home-grown on the roster.  The quality of high school hoops in the city must be pretty bad if there is not one player on the roster from Brandon. What a tremendous way to grow the sport. That tradition still is alive and well it would seem even though the wins and national championship appearances have declined over the years.   By the way, after Saturday's game. the women's team had an autograph session just outside the gym.  I had no idea how many would kids would go to meet Dave Taylor's squad. The answer was many! 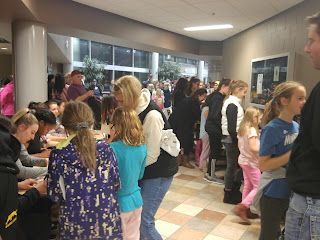 There was a solid lineup with wayyyyy more people than I thought coming over. It's my understanding it was the same for the men's session which was held during the women's game. That is helping grow the sport boys and girls!  There were a lot of kids there who want to be the next Christina McCusker, Michaela Kleisinger, Ben Hillis or Brayden Kuski.  Having a chance to rub elbows with them and watch them play is a great thing.  Well done!


--Is Stipe Miocic the greatest heavyweight fighter the UFC has ever seen? That was the talk after his win over a what we found out was a very much out-of-shape Francis Ngannou. That guy is about as well-conditioned as this blogger.  I thought he would rip Stipe's head off. Nope!  Instead it looked like he just wanted to curl up and take a nap inside the octagon.  Opportunity wasted!  As for Miocic, I have been watching UFC for quite a few years, but I am in no position to say if he is the best ever big man the sport has seen.


Bridge showed a lot of promise. He is young and lacks the experience Collaros has. If he thought he was coming in here as the starter and had to beat out KG, he is delusional though.

Patience will get you the shot you deserve whether it be here or elsewhere.

Learn from COllaros and whoever the QB coach is and be ready if your number is called.


My daughter was in that long line Saturday night. It is great to see the Cougar teams giving back and taking some time for a meet and greet.

U do a nice job on the mike at those games.

Take nothing away from them. They did what they had to in the key moments to win the game However, there were several flags that should have been thrown against them that weren't and several they didn't deserve that they got credit for.

Whenever Brady throws deep, you expect the flag to fly. Happened three times yesterday including one where the receiver was out of bounds when the flag was thrown.

Why do we hate the Patriots? Yesterday was another example!


Jones must have been silently laughing as Bridge signed that deal. If he allows himself to go to free agency, I don't think he is back here. Tough lesson learned for the kid and his agent.

Oh yes, hate the Partiots because a defender makes a bad decision and a ref throws a flag. Come on man, some people just hate the Patriots because they win (too much).