* The Blue Jackets escaped Tampa Bay with a 2-0 series lead over the Presidents’ Trophy winners, despite a 30-point difference in the standings between the two clubs during the regular season.

* The Golden Knights evened their series with the Sharks following a first period which featured both teams combining for six goals: Vegas took an early 3-0 lead and San Jose evened the score at 3-3 before the opening period came to a close.

* The Islanders took a 2-0 lead in a best-of-seven series for the first time since they captured the franchise’s last Stanley Cup 36 years ago.

The Blue Jackets raced out to a 3-0 lead and never looked back to earn a victory in Game 2 and escape Tampa Bay with a 2-0 series lead. In doing so, Columbus became just the fourth team to take a 2-0 series lead in the opening round against the Presidents’ Trophy winner since the award was introduced in 1985-86.

* Prior to the Blue Jackets, the most recent team to take a 2-0 series lead over the Presidents’ Trophy winner was the 2012 Kings over the Canucks. Los Angeles would win that series in five games and go on to become the first No. 8 seed to win the Stanley Cup in the conference era (since 1974-75). Contrarily, in 2002, the top-ranked Red Wings overcame a 2-0 series deficit to defeat the Canucks in six games and eventually win their 10th of 11 Stanley Cups. 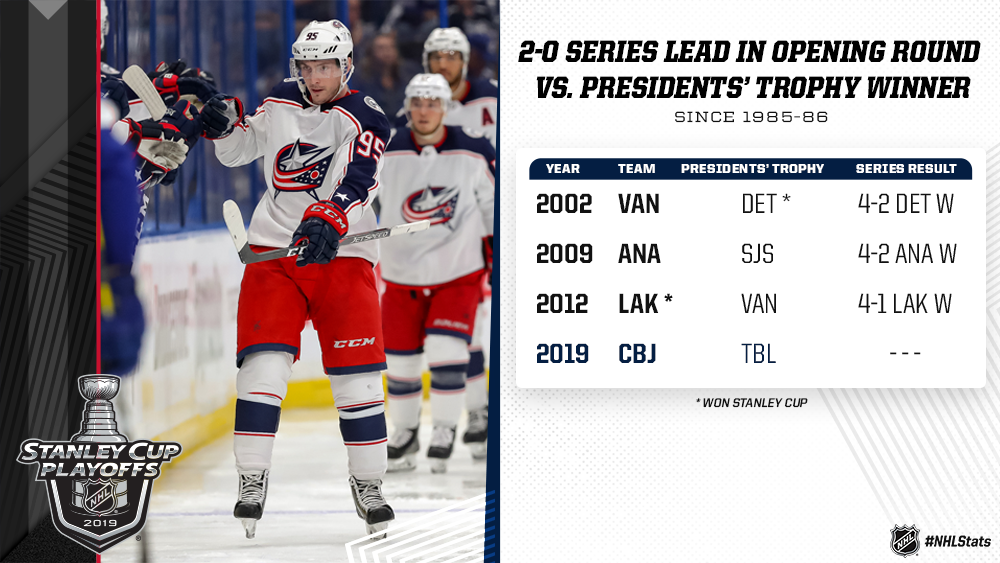 * This marks the second time in franchise history and consecutive postseasons in which Columbus, in search of its first-ever series win, has jumped out to a 2-0 series lead (also 2018 R1 vs. WSH). In 2018, they required overtime to secure wins in Game 1 (4-3 OT W) and Game 2 (5-4 OT W) before falling in six games. They have outscored Tampa Bay 9-4 through a pair of regulation wins to open the 2019 Stanley Cup Playoffs.

The Golden Knights jumped out to a 3-0 lead 6:11 into the contest, but the Sharks evened the score before the opening period came to a close to become the first team in Stanley Cup Playoffs history to tie a game in the first period after falling behind by three goals. Vegas rebounded from the San Jose rally with goals from Mark Stone and William Karlsson to even the First Round series at 1-1.

* Marc-Andre Fleury (34 saves) earned his 76th career win in the Stanley Cup Playoffs and moved within one of tying Mike Vernon (77) for seventh place on the NHL’s all-time list.

* Did You Know? The Golden Knights scored two shorthanded goals in Game 2 (Karlsson and Colin Miller). There have been five shorthanded goals scored in the 2019 Stanley Cup Playoffs (also Josh Anderson, Alex Killorn and Mitch Marner), the highest such total through the first three days of a postseason since 1997 when there were six (Benoit Brunet, Shayne Corson, Kris Draper, Brian Holzinger, Todd Marchant and Brian Rolston).

The Islanders scored three unanswered goals to overcome a 1-0 deficit and take a 2-0 lead in a best-of-seven series for the first time since the 1983 Stanley Cup Final – an eventual four-game triumph over the Oilers. The 1983 Final occurred approximately eight months before the birth of Johnny Boychuk (born Jan. 19, 1984), the oldest player in New York’s lineup on Friday.

* Jordan Eberle (1-1—2) scored the go-ahead goal at 7:54 of the third period and leads the Islanders with four points in the 2019 Stanley Cup Playoffs (2-2—4 in 2 GP). He has scored 12 game-winning goals in the regular season since being acquired by the team on June 22, 2017 – tops among all Islanders players in that span.

BINNINGTON, BLUES HEAD BACK TO ST. LOUIS WITH 2-0 SERIES LEAD

Jordan Binnington made 26 saves and Oskar Sundqvist (2-0—2) recorded his first multi-goal game since Nov. 1, 2018 (2-0—2 vs. VGK) as the Blues withstood the “Winnipeg Whiteout” for a second straight game to take a 2-0 lead in their First Round series.

* St. Louis won the first two games of a best-of-seven series on the road for the fourth time in franchise history and first since the 2017 First Round at Minnesota; the other two instances were in the 1993 Division Semifinals at Chicago and 2001 Conference Semifinals at Dallas. The Blues went on to win each of the previous three series, requiring no more than five games in each instance.

* Binnington became the second rookie goaltender in franchise history to earn a win in each of his first two or more career postseason starts; he joined Curtis Joseph, who backstopped the Blues to victory in each of the first three games of the 1990 Division Semifinals against the Maple Leafs.

The First Round of the 2019 Stanley Cup Playoffs continues on Saturday with a pair of lower seeds, the Stars and Maple Leafs, each aiming to return home with a 2-0 lead in their respective series with the Predators and Bruins.
* Dallas looks to take a 2-0 lead in a best-of-seven series on the road for the sixth time in franchise history and first since the 2008 Conference Semifinals – an eventual six-game triumph over San Jose.

* Toronto, meanwhile, can win the first two games of a best-of-seven series as visitors for the ninth time in franchise history and first since the 2001 Conference Quarterfinals at Ottawa. The Maple Leafs have accomplished the feat against the Bruins on one prior occasion  – during the 1949 Semifinals en route to a five-game series win.

* The second consecutive first-round series between the Maple Leafs and Bruins has caught the attention of hockey fans, with Game 1 between the Original Six rivals – which featured a raucous Boston crowd and a rare shorthanded penalty-shot goal from Toronto’s Mitch Marner – seeing a 26% increase in viewership on Hockey Night in Canada and an 18% bump on NBCSN over last year’s Game 1 between the same clubs and drew more than 3.7 million viewers.