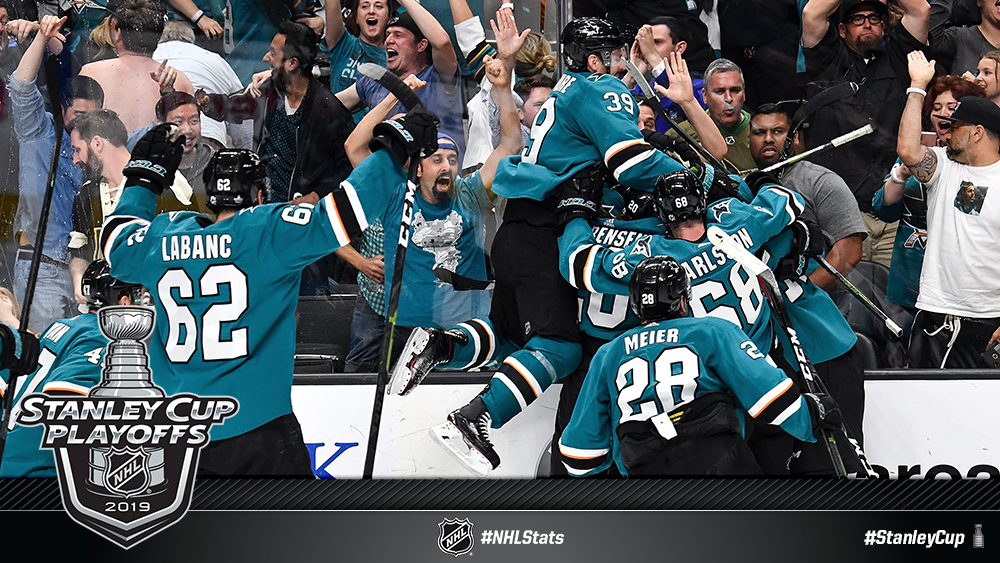 
* Barclay Goodrow scored the overtime winner as the Sharks stunned the Golden Knights by becoming the second team in NHL history to overcome a three-goal, third-period deficit to win a Game 7.

* Joakim Nordstrom and Sean Kuraly led the Bruins to their second Game 7 win over the Maple Leafs in as many years.

* The First Round of the 2019 Stanley Cup Playoffs is set to conclude tonight as the Capitals host the Hurricanes in Game 7.

SHARKS AND GOLDEN KNIGHTS PLAY TO STUNNING FINISH IN GAME 7

With the Golden Knights leading 3-0 in the third period, the Sharks scored four power-play goals in a span of 4:01 to take the lead but Vegas tied the game with 47 seconds left on the clock, setting the stage for Barclay Goodrow’s overtime goal to lift San Jose to victory in Game 7.

* The Sharks became the second team in NHL history to overcome a three-goal, third-period deficit to win a Game 7 - the Bruins did so in the 2013 Conference Quarterfinals against the Maple Leafs (5-4 OT W). Only three other teams in League history have overcome a three-goal deficit at any point to win a Game 7: Washington in the 1988 Division Semifinals, Edmonton in the 1991 Division Semifinals and Philadelphia in the 2010 Conference Semifinals.

* San Jose, which overcame a 3-1 series deficit to advance for the first time in franchise history, will face the Avalanche in the Second Round. This will mark their fifth all-time playoff meeting.

* San Jose matched the NHL record for most power-play goals in a playoff period, a mark last achieved by Washington in Game 3 of the 2016 First Round (4 PPG in 3rd). The Sharks’ four strikes in 4:01 were the eighth-fastest four goals by one team in Stanley Cup Playoffs history and fastest since the Blues in Game 3 of the 1998 Conference Quarterfinals (3:07 - coincidentally also all PPG).

* The Sharks, who earned a double-overtime win in Game 6, won consecutive playoff games in overtime for the second time in franchise history (also 2011: Game 6 of CQF, Game 1 of CSF).

BEHIND THE NUMBERS: THE PLAYERS BEHIND THE COMEBACK

In addition to his overtime winner, Barclay Goodrow tallied one shot on goal, went 2-for-5 in the face-off dot, posted a -2 rating and logged only 7:26 of ice time (including 1:40 in the extra frame). Goodrow, a former OHL captain signed by the Sharks in 2014 as an undrafted free agent, has had each of his two career playoff goals stand as game-winners (also Game 5 of 2019 R1). Ray Whitney is the only other player in franchise history to score in overtime of a Game 7 (2OT in 1995 CQF at CGY).

* Logan Couture (2-0—2) and Tomas Hertl (1-1—2) each scored to conclude the First Round with six goals apiece, one shy of tying the franchise record for most in a playoff series.

After Brad Marchand (4-5—9 in 7 GP) and David Pastrnak (2-4—6 in 7 GP) paced Boston through the first six contests, it was Joakim Nordstrom (1-1—2) and Sean Kuraly (1-1—2) who led the way Tuesday as the Bruins won Game 7 against the Maple Leafs for a second straight year. Boston will play Columbus in the Second Round, their first-ever playoff meeting.

* The Bruins earned their sixth consecutive series win over the Maple Leafs dating to the 1969 Quarterfinals to match the third-longest head-to-head series win streak in NHL history.

* Nordstrom, an offseason acquisition from Carolina, was one of three players to score for the Bruins in Game 7 after not being part of the team last season. Marcus Johansson (GWG) and Charlie Coyle (ENG), both acquired leading up to the 2019 NHL Trade Deadline, also scored for Boston. Those marked the first career Game 7 goals for all three players.

* Kuraly recorded his first points of the 2019 Stanley Cup Playoffs (3 GP) and first career points in a Game 7 (2 GP). Three of Kuraly’s five career postseason goals have come in clutch fashion (5-3—8 in 19 GP); his first two were scored in Game 5 of the 2017 First Round in Ottawa, including the double-overtime winner to help Boston stave off elimination.

* Tuukka Rask (32 saves), the 21st overall pick by the Maple Leafs in the 2005 NHL Draft, improved to 3-2 in five career Game 7s - with each of those victories coming against Toronto. He is the only goaltender in NHL history to earn multiple Game 7 wins against the Maple Leafs franchise. 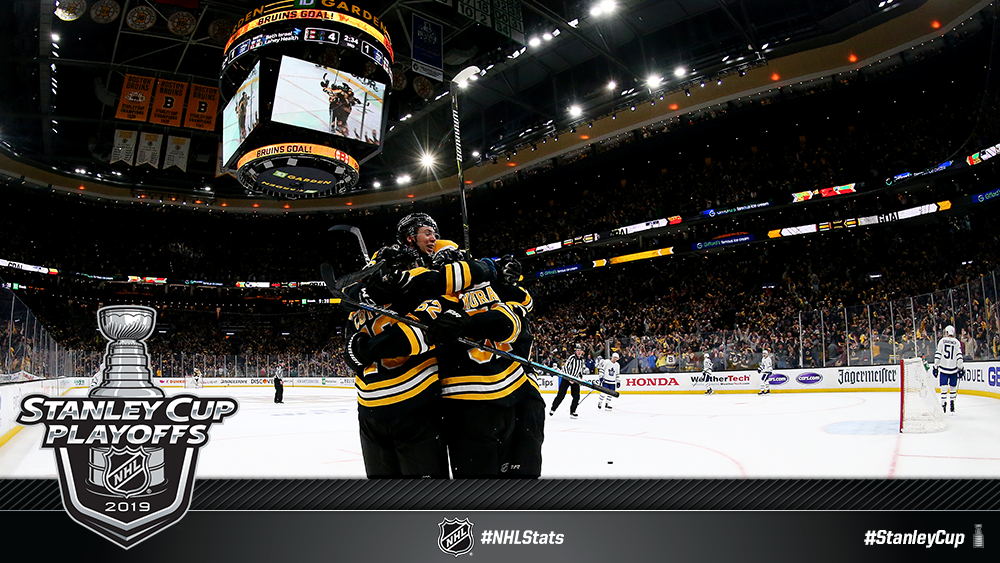 POWER PLAY SUCCESS: DID YOU KNOW?

* The Sharks and Golden Knights combined for six goals in the third period. Only two sets of teams have combined for as many goals in a period during a Game 7: the North Stars-Kings in the 1968 Quarterfinals (7 in 2nd) and Oilers-Flames in the 1984 Division Finals (6 in 2nd).

FIRST ROUND TO CONCLUDE WITH GAME 7 IN D.C.

The defending Stanley Cup champion Capitals will host the Hurricanes in Game 7 as the clubs vie for the final spot in the 2019 Second Round. Click here for detailed Game 7 statistics for the Capitals, Hurricanes and their players.

* Washington will play in its 12th Game 7 since the beginning of the 2008 Stanley Cup Playoffs, the most among all teams in that span, while Carolina will be making its first appearance since winning Game 7s in consecutive series of the 2009 Stanley Cup Playoffs en route to the Eastern Conference Final.

* Capitals forwards Nicklas Backstrom and Alex Ovechkin are set to make their 12th career Game 7 appearances (4-7). The only players in NHL history who have appeared in more Game 7s are Patrick Roy (13), Scott Stevens (13) and Zdeno Chara (13).

* Capitals forward Carl Hagelin is 8-1 in nine career Game 7s. His eight victories are tied for the most in NHL history with Brad Richards (8-0), Ray Bourque (8-1) and Glenn Anderson (8-4).

* Hurricanes captain Justin Williams is the leading Game 7 scorer in NHL history (7-7—14 in 8 GP). Williams, in his second stint with the club, will be making his first Game 7 appearance for the Hurricanes in 13 years. During the club's Stanley Cup-winning run in 2006, Williams tallied a goal and two assists in a 4-2 win over Buffalo in Game 7 of the Eastern Conference Final and notched the insurance goal in the 3-1 win over Edmonton in the winner-take-all finale of the Stanley Cup Final.