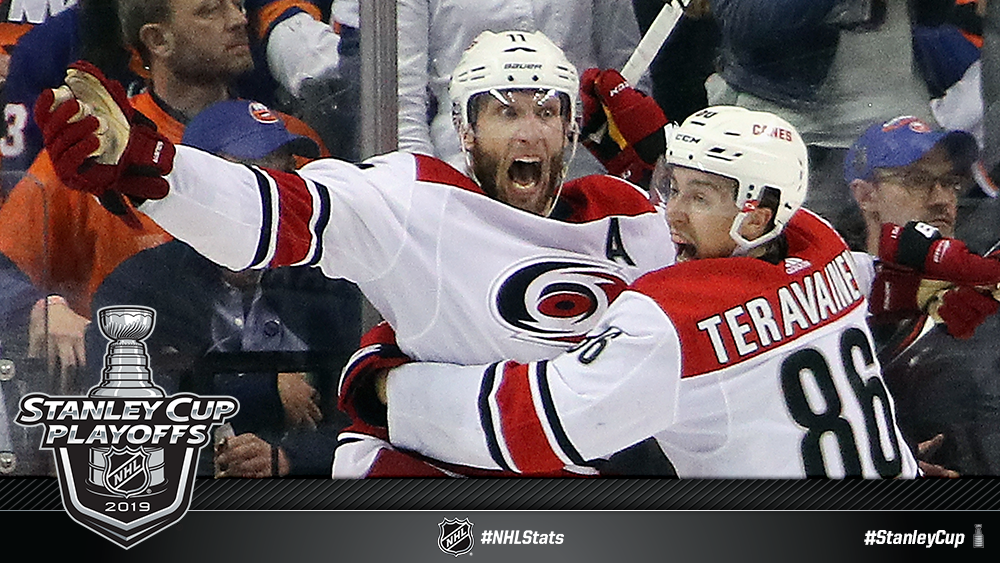 * Petr Mrazek earned his second shutout of the 2019 Stanley Cup Playoffs to help the Hurricanes outduel Robin Lehner and the Islanders in the 12th overtime game this postseason (50 GP; 24%). Friday was the sixth straight day to feature extra time.

* Brent Burns posted a career-high four points and Joe Thornton recorded his 100th career playoff assist as the Sharks rallied past the Avalanche in Game 1 at SAP Center.

After Petr Mrazek (31 saves) and Robin Lehner (31 saves) went save-for-save through 60 minutes - combining for 60 stops in regulation, including breakaway denials against Josh Bailey and Greg McKegg, respectively - Jordan Staal broke the ice in overtime to give Carolina a 1-0 series lead.

* Mrazek, who recorded an 18-save shutout in Game 3 against the Capitals in the First Round, became the third goaltender in Hurricanes/Whalers franchise history to record multiple shutouts in a playoff year, joining Cam Ward (2006 and 2009) and Kevin Weekes (2002).

* After scoring the tying goal in the third period of Wednesday’s Game 7 victory in Washington, Staal netted his first career playoff overtime goal. His brother Eric Staal also scored an overtime goal for the Hurricanes in the Stanley Cup Playoffs - exactly 13 years earlier, in Game 3 of the 2006 Conference Quarterfinals in Montreal. Hurricanes head coach Rod Brind’Amour provided the screen for Staal’s goal 13 years ago.

After collecting 1-3—4 through seven contests in the First Round, Brent Burns (1-3—4) matched those totals in Game 1 against the Avalanche - notching one of his three assists on Kevin Labanc’s highlight-reel go-ahead goal - to propel his team to a 1-0 series lead.

* After leading the team with a career-high 83 points during the regular season (16-67—83 in 82 GP) and being named a Norris Trophy finalist on Sunday, Burns factored on four of five goals. In doing so, Burns (17-34—51 w/ SJS) eclipsed Dan Boyle (11-37—48) for the most playoff points by a defenseman in Sharks franchise history. 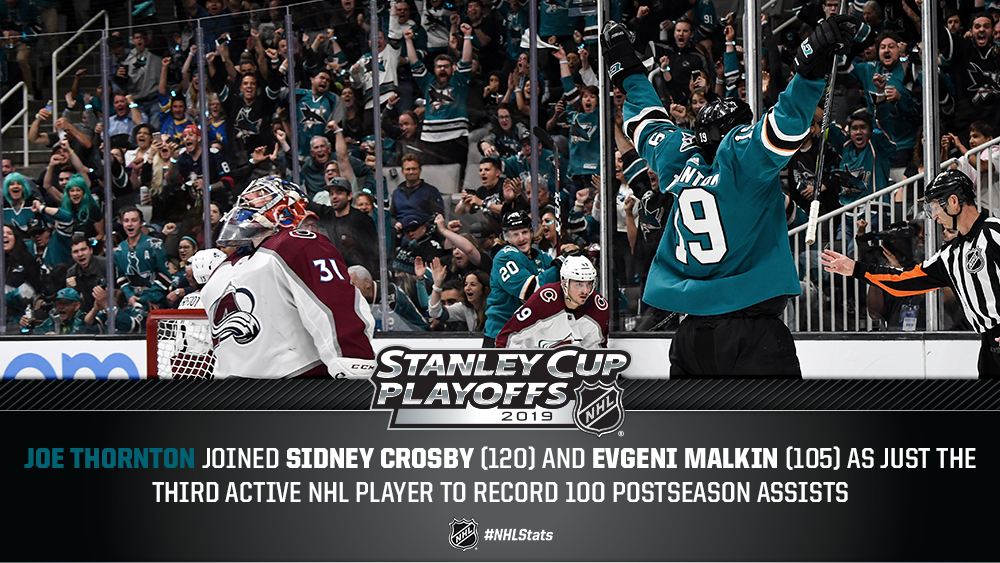 * Labanc netted his first career game-winning goal in the playoffs, doing so on the heels of a record-setting performance in Game 7 against the Golden Knights. The Staten Island, N.Y., native was selected in the sixth round (171st overall) by San Jose in the 2014 NHL Draft. He then posted back-to-back 100-point seasons with the Ontario Hockey League’s Barrie Colts in 2014-15 and 2015-16, finishing as the OHL’s top scorer in the latter campaign.

A pair of Wild Card teams will look to even their Second Round series during a doubleheader that begins Saturday at 3 p.m. ET in St. Louis.

After opening the second round with the highest U.S. viewership numbers in five years, the Blues, Stars, Bruins and Blue Jackets will contest another doubleheader today:

* After making 27 saves in Game 1, Blues rookie Jordan Binnington will look for the upper hand yet again on Stars netminder Ben Bishop. Both goaltenders were drafted by St. Louis, with Bishop (85th overall in 2005) making 13 appearances for the Blues before being traded to Ottawa eight months after the club selected Binnington with the 87th overall pick in the 2011 NHL Draft (87th overall).

* Acquired five days apart in February, Bruins newcomers Charlie Coyle (5-1—6) and Marcus Johansson (1-2—3) have combined for 6-3—9 through Boston’s eight playoff games, equaling their respective and cumulative regular-season point totals with the club (Coyle: 2-4—6 in 21 GP; Johansson: 1-2—3 in 10 GP). Coyle has scored on each of his last three shots and can become the first Bruins player to score on four straight shots in a postseason dating to 1997-98 (the first year of real-time statistics). Sixteen NHL players have done so in that span, including three last year (Mark Scheifele, Jake Guentzel and Alex Killorn).

* Columbus defensemen Zach Werenski (29:06) and Seth Jones (28:01) were the only skaters to log at least 25 minutes of ice time in Game 1 against Boston, marking the fourth such outing in five games this postseason for each of them. Artemi Panarin extended his playoff point streak to five games (2-4—6) on Thursday - part of a cumulative eight-game point streak dating to April 2 (3-7—10) - and has points in 12 of 13 games overall dating to March 24 (5-12—17).