* The Blue Jackets and Islanders each took 3-0 series leads, with Columbus pushing Presidents’ Trophy-winning Tampa Bay to the brink of elimination and New York doing the same with Pittsburgh.

* With opening-minute goals in every period and five points apiece from Mark Stone and Paul Stastny, the Golden Knights rode early momentum to accomplish a rare feat and pull ahead in their series.

* Patrik Laine scored for a third straight game to help the Jets to their first win of the 2019 Stanley Cup Playoffs.

Matt Duchene opened the scoring and Sergei Bobrovsky made 30 saves as the Blue Jackets pushed the Lightning to the brink of elimination, becoming the second team ever to take a 3-0 series lead against a Presidents’ Trophy winner in the opening round. Los Angeles also did so in 2012 against Vancouver, closing that series in five games en route to becoming the first No. 8 seed to win the Stanley Cup in the conference era (since 1974-75).

* With three wins in a series for the first time, the Blue Jackets now sit one victory shy of becoming the fourth team in NHL history - and second in as many seasons - to complete a four-game sweep to post their first-ever series victory. The Golden Knights (2018 R1 vs. LAK) and Penguins (1970 QF vs. OAK) each swept best-of-seven series, while the Flames (1981 PRLM vs. CHI) did so in a best-of-five. 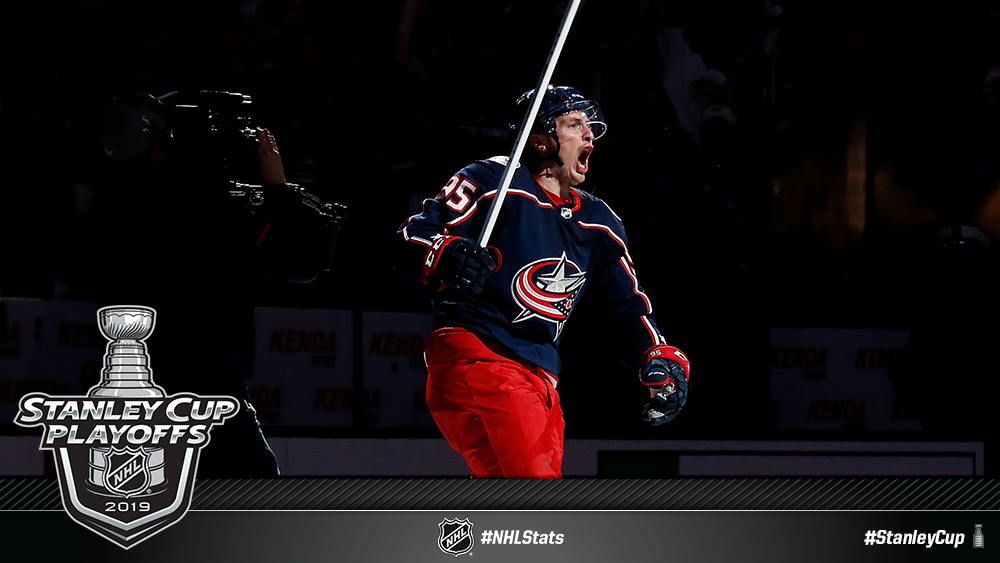 * Overall, this marks the 11th time in League history that the team with the best record in the NHL during the regular season has lost the opening three games of a series (at any point in the playoffs) - and eighth under a best-of-seven format. Five of the 10 previous instances have happened in the expansion era (since 1967-68).


* The Blue Jackets have allowed fewer than three goals in a playoff game only twice in their history (24 GP), both against the Lightning (the highest-scoring team in the regular-season in 23 years).


* Columbus has rallied off three consecutive victories over Tampa Bay, which hadn’t suffered more than two consecutive losses in more than a calendar year (0-3-0 from March 24-29, 2018).

Jordan Eberle scored the first of two goals in a span of 1:02 to erase a one-goal deficit and help the Islanders take a commanding 3-0 series lead against the Penguins. New York holds a 3-0 advantage in a best-of-seven series for the 10th time in franchise history and first since the 1983 Stanley Cup Final when they swept the Wayne Gretzky-led Oilers.

* Teams that take a 3-0 lead in a best-of-seven series own an all-time series record of 186-4, with one of the four comebacks in League history featuring a matchup between the Islanders and Penguins. New York lost the first three games against Pittsburgh in the 1975 Quarterfinals but Glenn “Chico” Resch allowed only four goals over the remaining four contests to help the Islanders become the first team in the modern era (since 1943-44) to win a best-of-seven series after trailing 3-0.

* Eberle has tallied in each game of the series to become just the third Islanders player in the last 25 years to score in three consecutive playoff games. He and Ray Ferraro (Games 1-5 of 1993 DSF) are the only players in franchise history to score a goal in each of their first three or more postseason games with the club.

The Golden Knights scored in the opening minute of each period - with Mark Stone (3-2—5) and Paul Stastny (2-3—5) accounting for each of those goals - en route to a Game 3 victory and a 2-1 series lead. Vegas is the first franchise in NHL history to hold a lead in each of its first five all-time playoff series.

* Both skating in their first season with the club, Stone netted his first career hat trick and Stastny registered a career-high five points - marking the first playoff hat trick and first five-point games ever by a Vegas player.

* Acquired at the 2019 NHL Trade Deadline, Stone has compiled 6-2—8 through three playoff games - surpassing his goal total over 18 contests with Vegas during the regular season (5-6—11). Additionally, his eight playoff points already equal his 19-game total compiled with Ottawa during its run to Game 7 of the Eastern Conference Final in 2017 (5-3—8 in 19 GP).


* The Golden Knights joined the 1981 Bruins as just the second team in NHL history to score an opening-minute goal in each period of a postseason game.

* Additionally, the Golden Knights became just the 13th team in NHL history and third in the last 30 years to score in the opening minute of consecutive postseason games, joining the 2000 Devils (Game 6 of CSF and Game 1 of CF) and 1991 Bruins (Game 1 and 2 of DSF).

Thirty-goal scorers Kyle Connor (2-0—2) and Patrik Laine (1-1—2) each found the back of the net Sunday as the Jets earned their first victory of the 2019 Stanley Cup Playoffs to cut their series deficit to 2-1 against the Blues.

* Laine has been a regular contributor for the Jets this postseason, collecting 3-1—4 in three games to become the first player in Jets/Thrashers franchise history to score in each of the team’s opening three games of a playoff year. 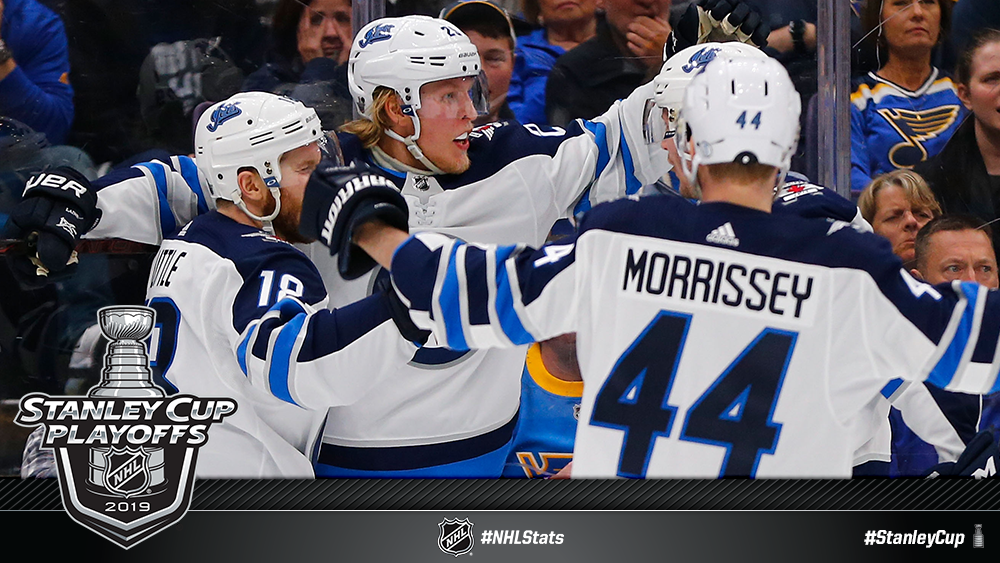 Playoff hockey returns to North Carolina for the first time in a decade as the Hurricanes look to cut their series deficit, while the Maple Leafs, Stars and Avalanche return home after earning splits in the opening two games on the road.

Three of these series required overtime on Saturday, with only the Bruins-Maple Leafs matchup decided in regulation. Overall, there have been four overtime games in the First Round thus far. In 2017, the First Round featured 18 overtime games - the highest such total in the opening round of the playoffs in NHL history.

* The Avalanche return to Pepsi Center, where they concluded the regular season with six straight victories. In Colorado’s final home game of 2018-19, Carl Soderberg tied the game in the third period to send the contest to overtime and help his club clinch a postseason berth.