* Max Pacioretty registered another multi-point outing as the Golden Knights scored early and often to push their Pacific Division rivals to the brink of elimination.

* The Jets rallied in the third period and Kyle Connor scored in overtime to lift Winnipeg to its first postseason overtime win in franchise history.

The Blue Jackets surrendered a two-goal lead in the second period but responded 54 seconds later en route to a sweep of the Lightning, securing the first series victory in franchise history. Playing in front of the third-largest crowd in club history, Columbus became the first team to sweep the Presidents’ Trophy winner in the opening round and will face either Toronto or Boston in the Second Round.

* Overall, the Blue Jackets became just the fourth club ever to complete a four-game sweep in any round against the team with the best record from the regular season. Each of the other three clubs won the Stanley Cup (1970 Bruins, 1988 Oilers, 1995 Devils).

* The fourth team in NHL history to complete a sweep for its first-ever series victory, Columbus also became the seventh team to defeat the Presidents’ Trophy winner in the first round (in any number of games). Of the other six clubs to do so, three reached the Stanley Cup Final including one who won the Cup (2012 Kings). 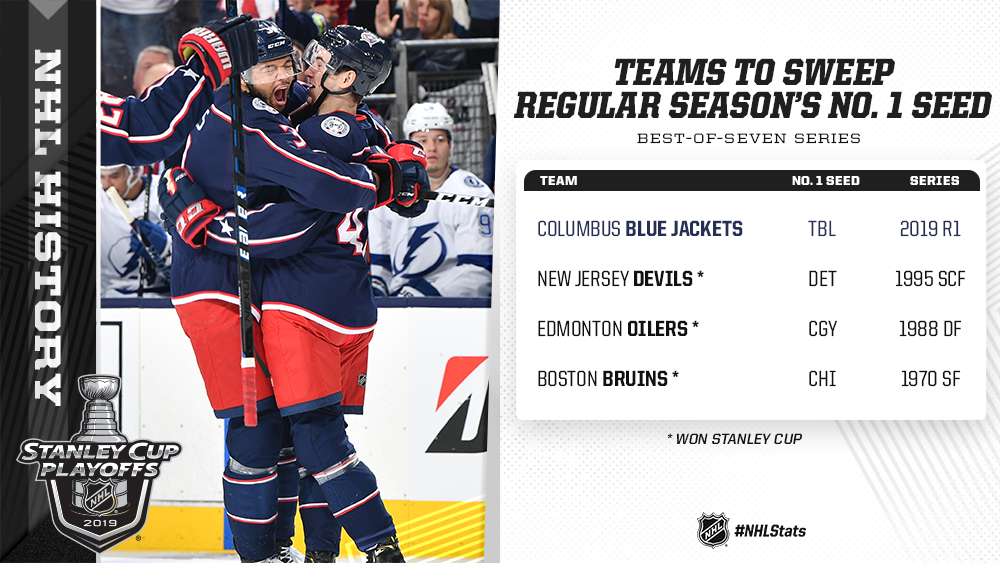 * Columbus’ series victory over Tampa Bay was selected by only 3.5% of entrants in the 2019 Stanley Cup Playoffs Bracket Challenge presented by Jägermeister - with only 0.24% choosing a Blue Jackets sweep.

. . . WHILE ISLANDERS ALSO ADVANCE PAST PENGUINS IN FOUR GAMES
After surrendering an opening goal 35 seconds into the contest, the Islanders scored three unanswered goals to sweep the Penguins and advance past the first round for the second time in the past 25 years. New York will play either Washington or Carolina in the Second Round.

The Islanders swept a best-of-seven series for the seventh time in franchise history, with their last one coming 36 years ago against the Wayne Gretzky-led Oilers in the 1983 Stanley Cup Final.

* The Islanders earned a series-clinching victory on the road for the 13th time in team history, with the last instance coming against the Penguins in the 1993 Division Finals.

HOW THEY GOT HERE: BLUE JACKETS AND ISLANDERS

Columbus (47:02) and New York (4:11) trailed for a combined 51:13 in their respective First Round series en route to completing sweeps less than 200 miles from one another on Tuesday.

A look at some of the key contributors for the Blue Jackets and Islanders:

The Blue Jackets featured 12 different goal-scorers and 15 different point-getters, with in-season acquisition Matt Duchene (3-4—7) leading the team in goals, assists (tied) and points. Columbus is just the second team in the last 28 years to have at least 12 different goal scorers in a series that required exactly four games, joining the 2011 Red Wings (13 vs. PHX).

* Blue Jackets goaltender Sergei Bobrovsky finished the series with a 2.01 goals-against average and .932 save percentage, highlighted by a stretch of 170:54 in which he stopped 71 of 73 shots between Tampa Bay’s third goal in Game 1 and first goal in Game 4.

* Islanders forward Jordan Eberle became the second player in franchise history to score a goal in each of the team’s first four games of a playoff year, following Ray Ferraro who opened the 1993 playoffs with a goal in five straight games. Eberle’s team-high six points (4-2—6) in the series match Ferraro (4-2—6) and Billy Carroll (1-5—6) for the most by an Islanders player through his first four playoff games with the club.

* Robin Lehner (1.47 GAA and .956 SV%) allowed one goal in each of Games 2, 3 and 4 en route to becoming the 13th goaltender in NHL history to win each of his first four postseason starts. 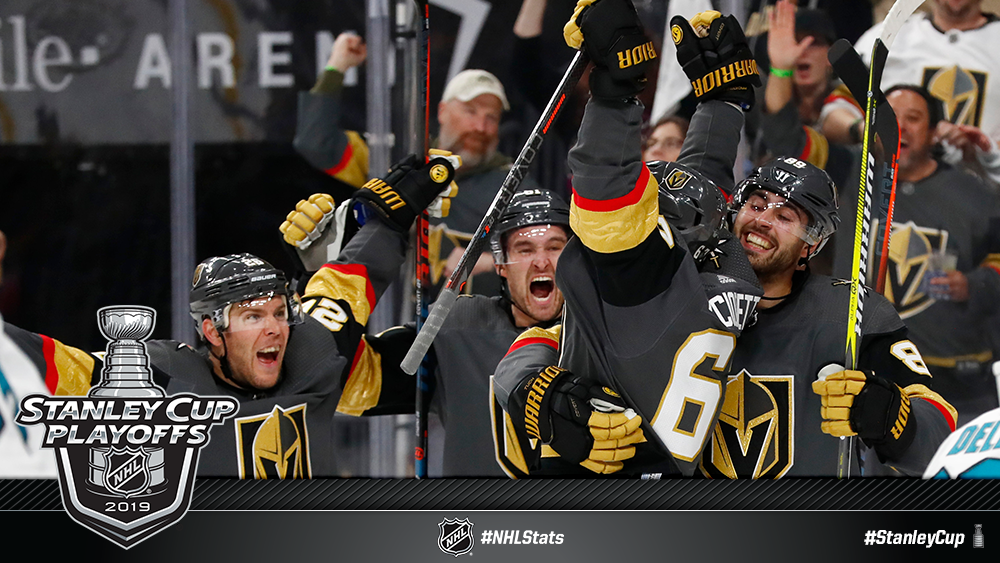 * Pacioretty is the third Golden Knights newcomer in as many outings to post at least four points, following Mark Stone and Paul Stastny who each posted five-point performances in Game 3. Pacioretty (4-6—10 in 4 GP) also became the first player to begin a postseason with at least four consecutive multi-point games since Paul Martin with Pittsburgh in 2014.

* The Golden Knights are the second team in the last 23 years to score five or more goals in at least three consecutive games within a playoff series (also 2010 Capitals vs. MTL in CQF).

Mark Scheifele (1-1—2) tied the game in the third period and Kyle Connor (1-1—2) scored 6:02 into overtime to help the Jets even their series with the Blues at two games apiece. Captain Blake Wheeler assisted on both goals as Winnipeg earned an overtime win in the Stanley Cup Playoffs for the first time in franchise history (1-2).

* Scheifele set a single-series NHL record with eight road goals in Nashville during the 2018 Second Round and ranked second in total goals during the 2018 postseason (14). He has scored 12 of his 16 career playoff goals on the road (12-5—17 in 12 GP), joining Steve Payne (12-6—18 in 12 GP) as just the second player in NHL history to average at least one goal per game through their first 12 career road playoff contests.

* Connor, who scored twice in Game 3, gave the Jets their fifth consecutive victory in St. Louis dating to Feb. 23, 2018 (including regular season). In fact, the road team has won nine of the last 10 contests between the clubs.

* The Maple Leafs aim to take a 3-1 lead in a best-of-seven series for the 13th time in franchise history (11-1 series record) and second time in 55 years (1987 DF: 4-3 L vs. DET). Toronto head coach Mike Babcock (89) needs one win to surpass Glen Sather and Darryl Sutter into sole possession of seventh place on the all-time playoff list.

* The Avalanche hold a 2-1 advantage over the Flames thanks to a three-point showing and overtime winner over the past two games by Nathan MacKinnon (3-1—4). Colorado, which has held a 3-1 series lead 12 times in franchise history (9-2 series record), will try to become the eighth team to put the No. 1 seed in the Western Conference on the brink of elimination (last: Nashville in 2017 vs. CHI). The Avalanche have won seven straight games at Pepsi Center dating to March 17.

* Thanks in part to a 40-save performance by Pekka Rinne on Monday, the Predators are ahead of the Stars in the most tightly-contested series thus far, with each game decided by one goal. Nashville has held a 3-1 series lead on three occasions, advancing each time.
at 4/17/2019