* The First Round came to a close with the Hurricanes knocking off the defending Stanley Cup champions in the third-longest Game 7 in NHL history.

* Ten games required overtime in the First Round, matching the total from the entire 2018 postseason.

* For the first time in NHL history, the top team from each conference and all division winners were eliminated in the opening round. Washington’s defeat guarantees that there will be a new Stanley Cup champion for the 19th time in the past 20 seasons.


HURRICANES RALLY FOR FIRST SERIES WIN IN A DECADE

Carolina overcame a 3-1 deficit and Brock McGinn (1-1—2) scored the winner at 11:05 of the second overtime as the Hurricanes rallied past the Capitals in Game 7 and advanced to the Second Round of the 2019 Stanley Cup Playoffs. Carolina earned its first Stanley Cup Playoff series win since the 2009 Conference Semifinals – a seven-game triumph over Boston.

* The Hurricanes, who earned the only road win in their First Round series with the Capitals, improved to 5-3 in eight all-time Game 7s – including five straight victories. Their five consecutive Game 7 wins dating to the 2006 Conference Finals (4-2 W vs. BUF) are the fourth-longest such run in League history. 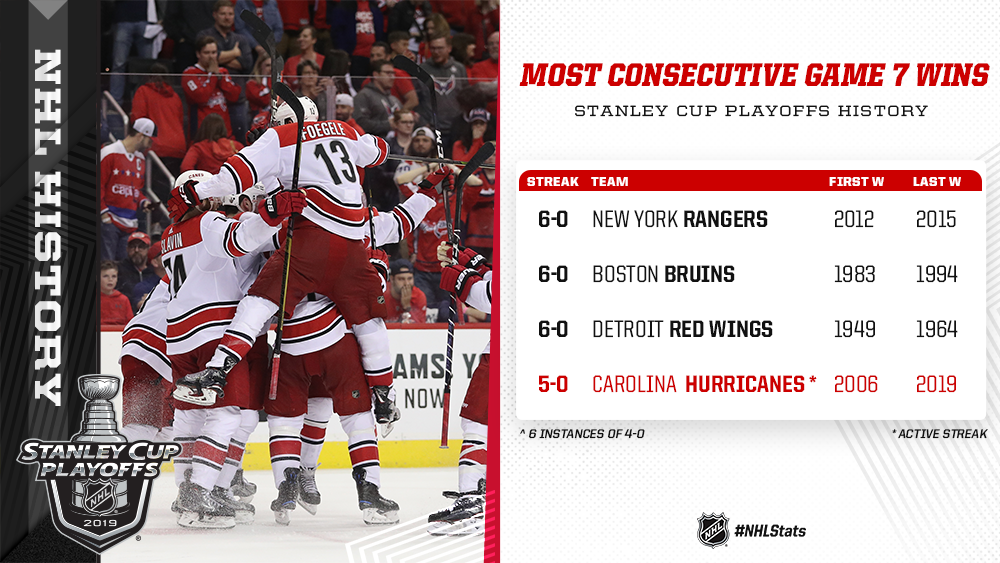 * The Hurricanes became the 13th team in NHL history and second in as many days to overcome a multi-goal deficit to win a Game 7 (also SJS in 2019 R1). Carolina became the second team in League history to accomplish the feat against a defending Stanley Cup champion, joining Los Angeles in the 2014 Conference Finals (5-4 OT W at CHI).

* The Hurricanes will face the Islanders in the Second Round of the 2019 Stanley Cup Playoffs, their first-ever postseason meeting. New York held a 3-1-0 edge through the four-game season series (CAR: 1-2-1).

BEHIND THE NUMBERS: THE PLAYERS BEHIND THE COMEBACK

Brock McGinn became the second player in Hurricanes/Whalers franchise history to score an overtime goal in a Game 7, joining Scott Walker in the 2009 Conference Semifinals (3-2 OT W at BOS). Aside from McGinn and Walker, only two other players in franchise history have scored a series-clinching goal in overtime: Martin Gelinas in Game 6 of the 2002 Conference Finals (2-1 OT W at TOR) and Cory Stillman in Game 6 of the 2006 Conference Quarterfinals (2-1 OT W at MTL).

* Jordan Staal scored the tying goal at 2:56 of the third period, his third career goal in a Game 7 and first with the Hurricanes (3-0—3 in 5 GP). His older brother, Eric Staal, also scored a Game 7 goal with the Hurricanes – doing so during the 2009 Conference Quarterfinals (1-1—2 at NJD).

* They became the fourth set of brothers in NHL history to each score at least one Game 7 goal with the same franchise, joining Henri Richard and Maurice Richard (w/ MTL), Dennis Hull and Bobby Hull (w/ CHI) and Andrei Kostitsyn and Sergei Kostitsyn (w/ MTL).

* Capitals forwards Nicklas Backstrom and Alex Ovechkin made their 12th career Game 7 appearance. The only players in NHL history who have appeared in more Game 7s are Patrick Roy (13), Scott Stevens (13) and Zdeno Chara (13).

SIXTY IS NOT ENOUGH

The First Round of the 2019 Stanley Cup Playoffs featured two Game 7s that required overtime, with each occurring on consecutive days.

SECOND ROUND OPENS IN BOSTON, ST. LOUIS ON THURSDAY

After three Game 7s over two days thrilled fans to conclude the opening round of the 2019 Stanley Cup Playoffs, half of the Second Round series will contest Game 1 on Thursday when the Bruins host the Blue Jackets at TD Garden and the Blues welcome the Stars to Enterprise Center.

* The Bruins and Blue Jackets are meeting in the postseason for the first time. Columbus is coming off a historic First Round sweep of the Presidents’ Trophy-winning Lightning to advance past the opening round of the playoffs for the first time in franchise history while Boston was victorious in an opening-round, seven-game series against Toronto for the second straight season.

* The Stars and Blues franchises, meanwhile, will face off in the postseason for the 14th time, with St. Louis holding a 7-6 series edge. They have split the four series since the Stars relocated to Dallas in 1993-94, with the Blues winning the last two meetings including a seven-game triumph in the 2016 Second Round.