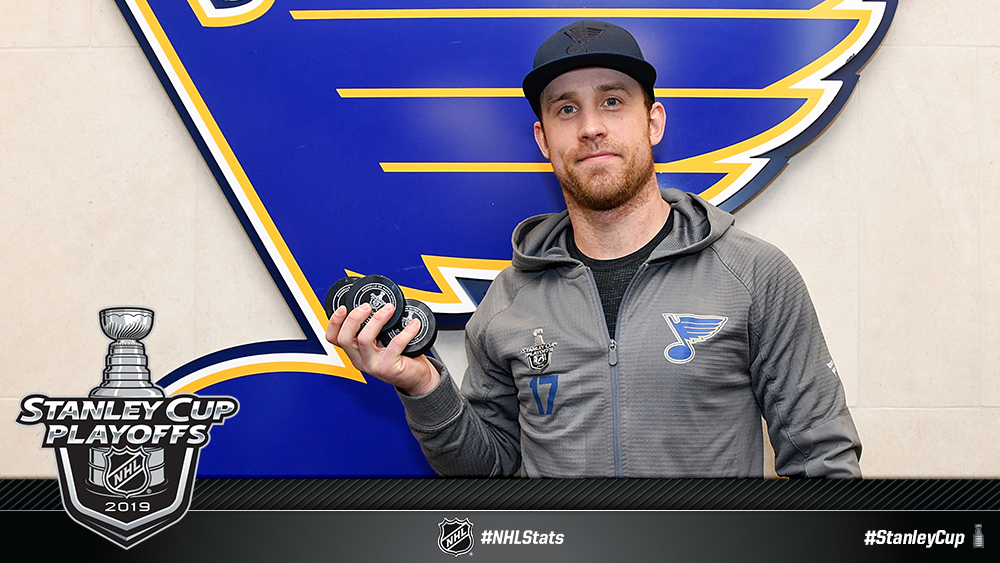 * The Blues became the first team in the NHL’s expansion era (since 1967-68) to win a playoff series after ranking last overall at any point after New Year’s Day (min. 20 GP).

* Three of the first four teams to advance in the 2019 Stanley Cup Playoffs have defeated a team that finished higher than them in the standings. Since 1974-75, when conferences were introduced, the most lower-seeded teams to advance in an opening round was six (1993 DSF).

* The Stars and Capitals each earned Game 5 wins to take 3-2 series leads.

Jaden Schwartz tallied his first career postseason hat trick to power the Blues past the Central Division-rival Jets in six games. St. Louis became the first team in the NHL’s expansion era (since 1967-68) to win a playoff series after ranking last overall at any point after New Year’s Day (min. 20 GP).

* The Blues, who have advanced past the opening round in three of the last four seasons, will face either the Predators or Stars in the Second Round (DAL leads series 3-2). 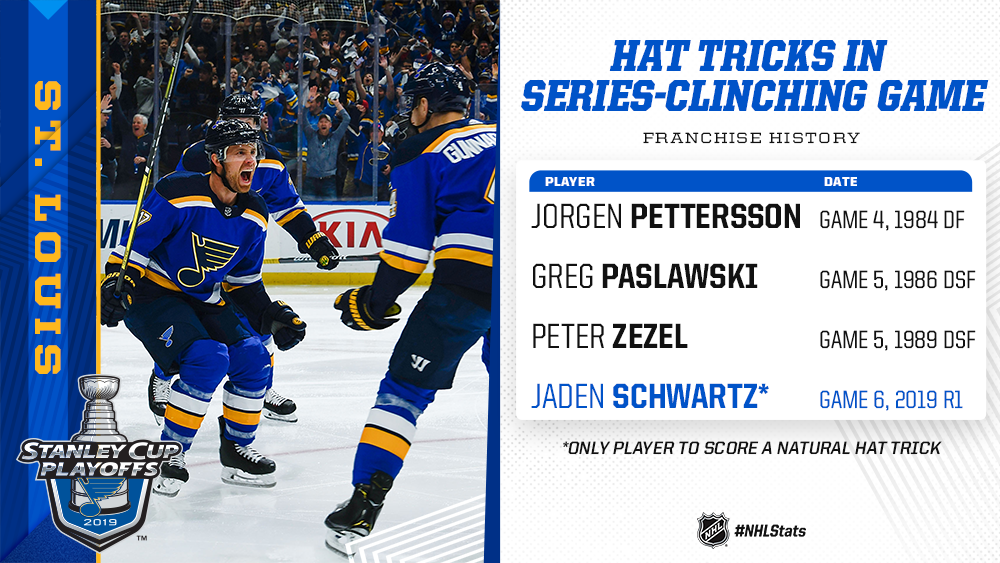 * Schwartz has accounted for four consecutive team goals dating to Game 5 and has registered the game-winning tally for the second time in as many contests. He joined Phil Roberto (Game 2-4 of 1972 QF) and Red Berenson (Game 1-2 of 1969 SF) as the third player in Blues franchise history to account for four consecutive team goals in the postseason.

STARS SHINE WITH ANOTHER FIVE-GOAL OUTING

The line of Alexander Radulov (2-0—2), Tyler Seguin (1-1—2) and Jamie Benn (0-3—3) propelled the Stars to their second straight five-goal outing and a 3-2 advantage in their best-of-seven series with the Predators. Dallas can advance past the opening round for just the second time in 10 years when they host Game 6 on Monday.

* Dallas, which tallied the fewest goals in the regular season among all playoff-bound clubs (210 including shootout-deciding goals), has scored at least five goals in consecutive playoff games for the ninth time in franchise history and first since Game 3-4 of the 1991 Conference Finals.

* Radulov recorded his second career multi-goal game in the playoffs, after first doing so in his postseason debut with Nashville (Game 1 of 2007 CQF). Additionally, his four tallies in the 2019 Stanley Cup Playoffs surpasses his single-postseason high also set in 2007 (3-1—4 in 4 GP).

* Benn notched all three of his helpers in the second period to register his first three-assist performance in the playoffs. In fact, his three assists in the middle frame matched the NHL playoff record for most in a single period, also accomplished by Washington’s John Carlson earlier this postseason (0-3—3 in Game 1 vs. CAR).

Nicklas Backstrom (2-2—4) matched a playoff career high with four points to power the Capitals to a six-goal outing and a 3-2 lead in their best-of-seven series with the Hurricanes. Saturday marked the largest margin of victory in a playoff shutout in franchise history, besting the previous mark of four - accomplished on three other occasions.

* Braden Holtby turned aside all 30 shots he faced to register his seventh career postseason shutout and eclipse Olie Kolzig (6) for the most in Capitals franchise history. His 30-save outing matched a postseason career-high in a shutout performance, also accomplished in Game 3 of the 2015 Second Round (vs. NYR).

The Maple Leafs and Golden Knights return to Scotiabank Arena and T-Mobile Arena, respectively, with a chance to advance to the Second Round of the 2019 Stanley Cup Playoffs on home ice in Game 6.

* Toronto enters Sunday’s contest with the opportunity to advance past the opening round for the first time since the 2004 Stanley Cup Playoffs. The Maple Leafs hold an all-time record of 35-14 in potential series-clinching games on home ice.

* When trailing a best-of-seven series 3-2, the Bruins have won to force Game 7 ten times while going on to win the series on three of those occasions. In the same scenario, the Sharks have extended to a seventh and deciding game twice - winning once.

The Blues have more Canadians on team and I am happy for them winning.