Jim Hopson Named To The Canadian Football Hall of Fame 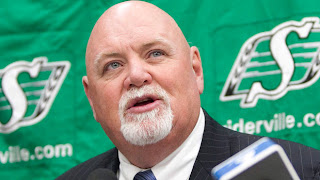 Former Riders president/CEO Jim Hopson was named as a builder as the Class of 2019 was announced in Toronto on Wednesday morning.

The 68-year-old became the team's first president and CEO with the team reaching four Grey Cup games winning in 2007 and 2013 with the team perhaps experiencing a popularity that it never had---something that continues on today.

Hopson, a Regina native, also played for the Riders in 1973.

The induction ceremony will be held in Hamilton on August 9. Others going in are Jon Cornish, Mervyn Fernandez, Terry Greer, David Williams, Ernie Pitts and Frank Smith as a builder.

Jim Hopson? Old Hopson was fortunate Mr Roy Shivers had built and layed down the professional team foundation prior to his arrival. Easy to follow once those building blocks were in place.