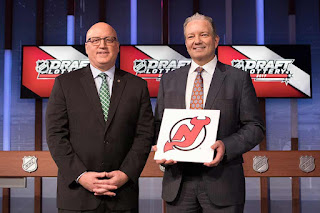 The clubs that did not qualify for the 2019 Stanley Cup Playoffs – or the clubs that acquired the first-round picks of the non-playoff clubs – participated in the 2019 NHL Draft Lottery.

The order of selection for the first 15 drafting positions in the First Round, only, of the 2019 NHL Draft is as follows:

The remaining positions are determined by the results of the Stanley Cup Playoffs.


In the drawing that determined the No. 1 drafting position, the Devils had the 3rd-greatest percentage likelihood of being selected based on inverse order of regular-season finish (11.5%). The Devils are the second team in the past five years to jump from the No. 3 position to claim the first overall draft pick (Edmonton, 2015: selected Connor McDavid).

The franchise has made the first overall Draft selection twice, picking Rob Ramage in 1979 (as the Colorado Rockies) and Hischier in 2017.

In the drawing that determined the No. 2 drafting position, the Rangers had the 5th-greatest percentage likelihood among the 14 remaining clubs eligible for selection (8.5%) and climbed from No. 6 to No. 2. The Rangers, selected in the NHL Draft Lottery for the first time in franchise history, become the second team from the No. 6 spot to win a Draft Lottery drawing (Winnipeg jumped from No. 6 to No. 2 in 2016).

The Rangers have picked No. 2 overall once, selecting future Hockey Hall of Fame defenseman Brad Park in 1966.

In the drawing that determined the No. 3 drafting position, Chicago had the 10th-greatest percentage likelihood among the 13 remaining clubs eligible for selection (3.1%). The Blackhawks have been selected in the NHL Draft Lottery for the third time in franchise history, jumping from 8 to 4 in 1999 and from 5 to 1 in 2007. They are the first team from the No. 12 spot to win a Draft Lottery drawing.

The Blackhawks have made five selections at No. 3 overall, a list that includes current captain Jonathan Toews (2006) as well as club legends Denis Savard (1980) and Ed Olczyk (1984).

For each of the three drawings, 14 balls, numbered 1 to 14, were placed in a lottery machine. The machine randomly selected four balls. The resulting four-number series (without regard to selection order) was matched against a chart that shows all possible combinations and the clubs to which each was assigned. The chart showed that the Devils had been assigned the numbers (2-4-10-12) that were expelled in the first drawing, followed by the Rangers (2-5-9-11) in the second drawing and the Blackhawks (2-3-9-11) in the third drawing.