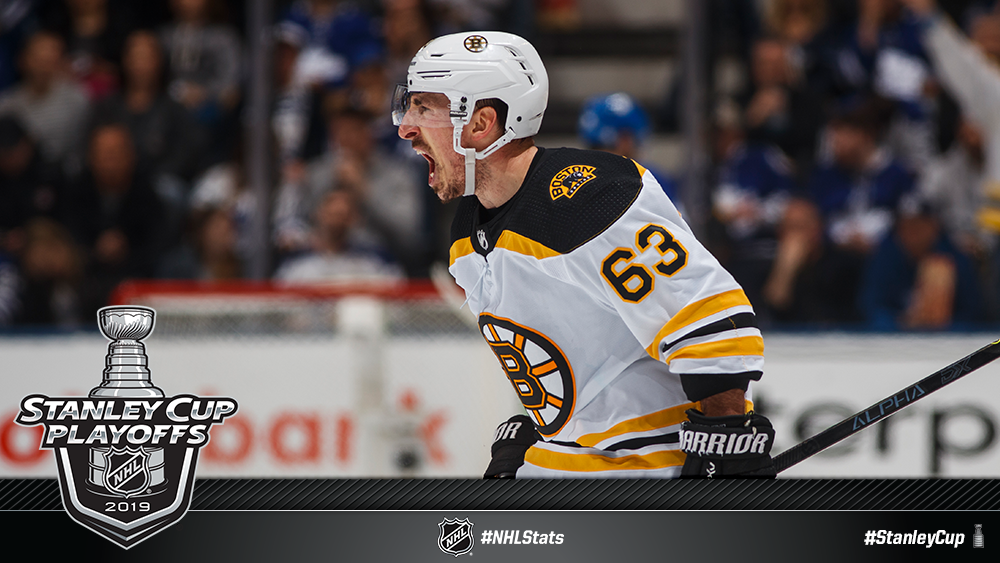 * Tomas Hertl scored a first-of-its-kind shorthanded double-overtime winner as the Sharks defeated the Golden Knights to stave off elimination and force Game 7.

* The Bruins defeated the Maple Leafs and will face Toronto in a Game 7 for the second time in as many years.

* Two Game 7s will be contested on the same day for the first time since May 10, 2017, when the Penguins blanked the Capitals (2-0 W) and the Ducks edged the Oilers (2-1 W) as both teams advanced to the Conference Finals.

Tomas Hertl scored while shorthanded at 11:17 of the second overtime as the Sharks defeated the Golden Knights to force Game 7 in their First Round series. San Jose won to survive elimination and force a Game 7 for the third time in franchise history (also 1995 CQF vs. CGY and 2012 CSF vs. LAK).

* Hertl became the fifth player in franchise history to score an overtime goal in a game that required multiple overtimes and the second to do so in a contest where the Sharks faced elimination; he joined Ray Whitney in Game 7 of the 1995 Conference Quarterfinals (5-4 2OT W at CGY).

* Additionally, Hertl became the first player in NHL history to score a shorthanded winner in a game that required multiple overtimes. Only eight other players in League history have scored a shorthanded goal in the first overtime of a postseason game. 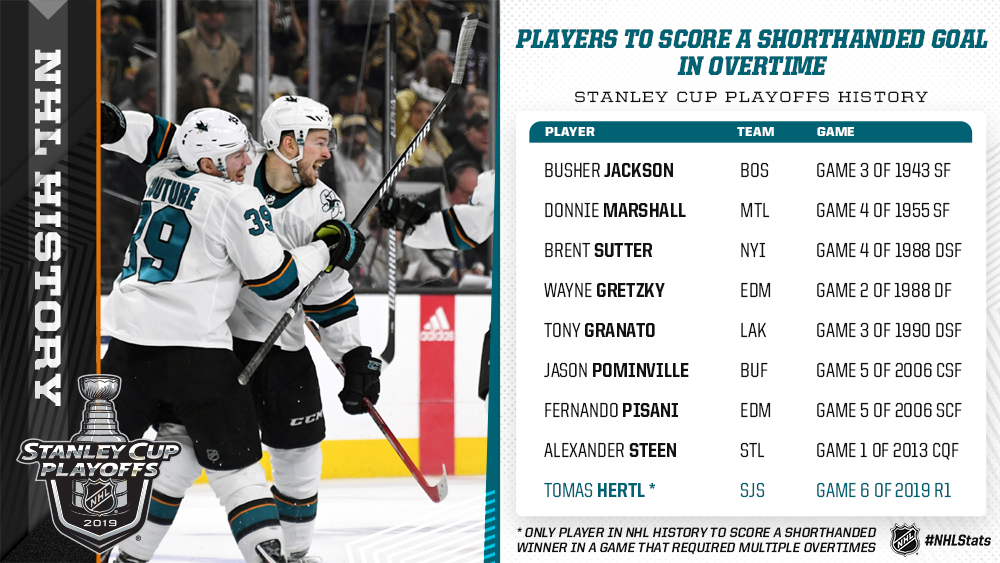 * Martin Jones made 58 saves to establish a franchise record for most in a postseason game, eclipsing the previous mark of 56 set by Wade Flaherty in Game 7 of the 1995 Conference Quarterfinals (5-4 2OT W at CGY). He also set a Sharks record for most saves in any game, besting the old benchmark of 57 set by Jeff Hackett on Dec. 26, 1992 (7-2 W vs. LAK).

* The Golden Knights, meanwhile, will contest their first Game 7 in franchise history. Vegas can become the 16th franchise in NHL history to win its first-ever Game 7 and second in as many years; they would join the Jets, who accomplished the feat in the 2018 Second Round (5-1 W at NSH).

Brad Marchand (2-1—3) factored on three of four goals as the Bruins outshot the Maple Leafs 41-24 to force Game 7 in their First Round series. Boston won to survive elimination and force a Game 7 for the 11th time in franchise history and first since a Game 6 victory in the 2012 Conference Quarterfinals (4-3 OT W at WSH).

* The Bruins recorded a shot differential of +17 or higher in a game where they were facing elimination for the seventh time since 1955-56 and first since outshooting the Hurricanes 40-19 in Game 5 of the 2009 Conference Semifinals (+21).

* Boston has converted on seven of 16 power-play opportunities in the 2019 Stanley Cup Playoffs (43.7%), including going two-for-two in Game 6. The Bruins have scored more than seven power-play goals in a postseason series on eight prior occasions (since 1933-34), most recently in the 1991 Conference Finals (8 vs. PIT).

Washington enters Monday’s contest with the opportunity to advance past the First Round for the fifth consecutive year. The Capitals hold an all-time record of 20-32 in potential series-clinching games, including a 4-0 mark in 2018 en route to capturing the franchise’s first-ever Stanley Cup.

* Dallas, meanwhile, looks to earn its first playoff series win since a six-game triumph over Minnesota in the 2016 First Round. The Stars/North Stars hold an all-time record of 29-22 in potential series-clinching games, including a 15-8 mark on home ice.

* When trailing a best-of-seven series 3-2, the Hurricanes/Whalers have won to force Game 7 four times while going on to win the series on one of those occasions (2009 CQF vs. NJD). In the same scenario, the Predators have extended to a seventh and deciding game three times – winning once (2016 R1 vs. ANA).