* The Blue Jackets erased a 3-0 deficit in regulation to stun the No. 1-seeded Lightning.

After falling behind by three goals in the first period, the Blue Jackets scored four unanswered markers – including three in the third period – to erase a 3-0 deficit and steal Game 1 from the Presidents’ Trophy winners.

* Columbus became the sixth team in NHL history to rally from a deficit of at least three goals to win a playoff game against the No. 1-seeded club. The Blue Jackets became the 27th team in League history to overcome a deficit of at least three goals and win a playoff game in regulation and first since the Jets in Game 3 of the 2018 Second Round against the Presidents’ Trophy-winning Predators (7-4 W). 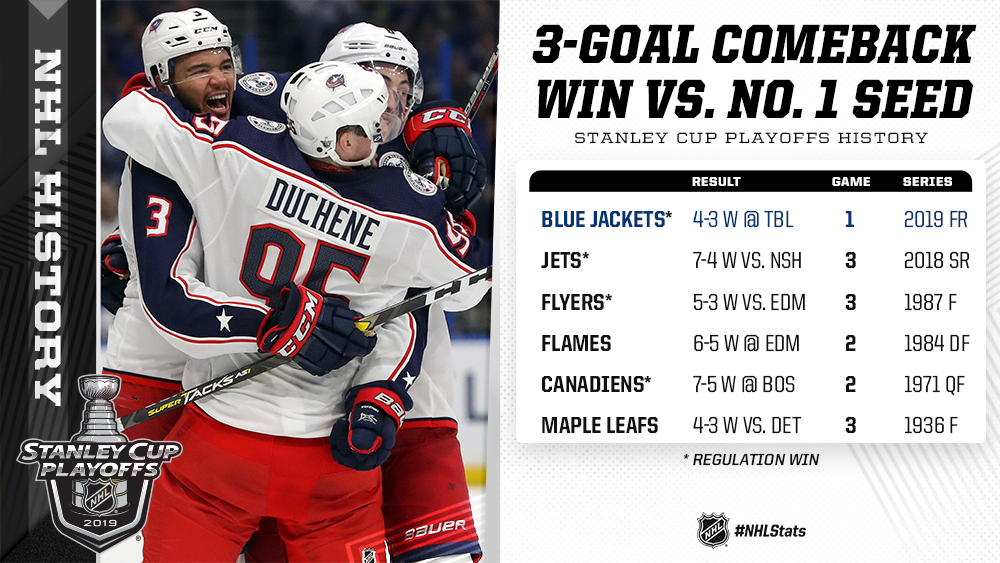 * Five players have been in the Columbus lineup for all five postseason multi-goal comeback wins: Cam Atkinson, Boone Jenner, Brandon Dubinsky, Sergei Bobrovsky and David Savard – whose highlight reel goal was the first of three third-period markers for the Blue Jackets.

The Penguins overcame deficits of 1-0, 2-1 and 3-2, but Josh Bailey scored at 4:39 of overtime to power the Islanders to victory in their first postseason opener at home since 1988.

* Bailey, who has played each of his 820 career games with the Islanders (regular season and playoffs), scored his first career game-winning goal in the Stanley Cup Playoffs. He became the first Islanders player to score an overtime goal in the postseason since John Tavares tallied 30:41 after regulation in Game 6 of the 2016 First Round to power New York to its first series win since the 1993 Division Finals (2-1 2OT W vs. FLA).

* Making his first career playoff start just four days after securing the William M. Jennings Trophy, Robin Lehner (41 saves) became the third Islanders goaltender to make 40 or more saves in a postseason game against the Penguins. He joined Billy Smith (44 saves) in Game 2 of the 1975 Quarterfinals (3-1 L) and Glenn Healy (42 saves) in Game 7 of the 1993 Division Finals (4-3 OT W).

Stars rookie Miro Heiskanen (2-0—2) became the youngest defenseman in NHL history to score twice in his playoff debut, leading the Stars past the Predators in Game 1 of their First Round series.

* Heiskanen became the first Stars rookie skater to record a multi-goal game in the postseason since Niko Kapanen in Game 5 of the 2003 Conference Semifinals (2-0—2 vs. ANA). 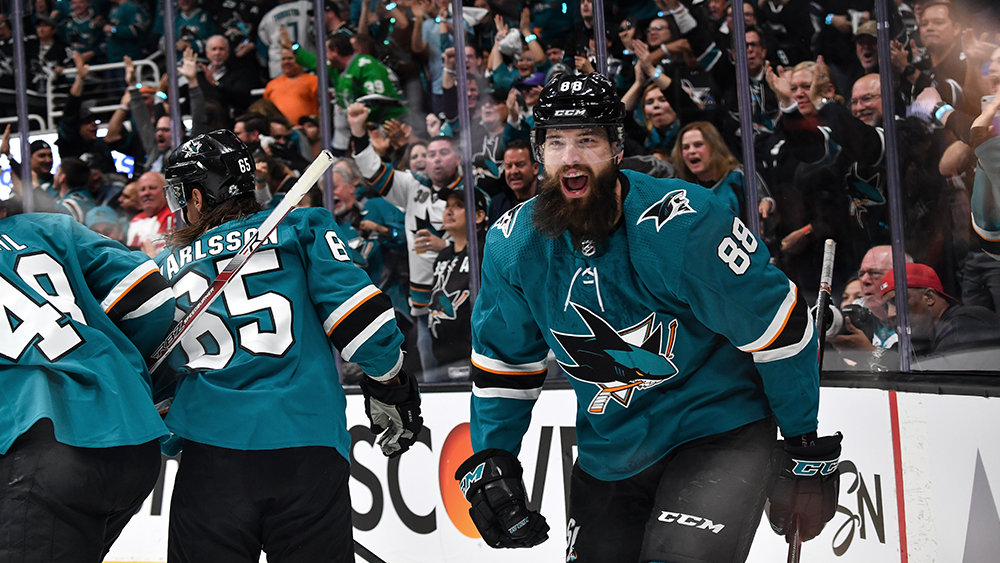 * Karlsson registered two assists in his first playoff game with the Sharks. In his most recent postseason run, Karlsson averaged almost one point per game to lead the Senators to within one game of the 2017 Stanley Cup Final (2-16—18 in 19 GP).

David Perron tied the contest at 4:05 of the third period and Tyler Bozak scored the go-ahead goal with 2:05 remaining in regulation as the Blues withstood the return of the “Winnipeg Whiteout” to win Game 1.

* After notching five shutouts and establishing a single-season franchise record for wins by a rookie (24-5-1), Jordan Binnington made 24 saves to win his Stanley Cup Playoffs debut. Binnington became the third rookie goaltender in franchise history to earn a win in his first career postseason start, joining Ed Staniowski in Game 1 of the 1976 Preliminary Round (5-2 W vs. BUF) and Curtis Joseph in Game 1 of the 1990 Division Semifinals (5-2 W vs. TOR).

The Bruins host the Maple Leafs at TD Garden in the second opening-round meeting in as many seasons between Boston and Toronto. The Maple Leafs hold an 8-7 advantage in the 15 prior series between the clubs, but the Bruins have won their past five postseason meetings – including seven-game victories in the last two (2013 CQF, 2018 R1).

The Capitals begin the quest to defend their title when they host the Hurricanes, who have excelled in the New Year with a 30-12-2 (62 points) record since Jan. 1. Carolina will contest its first postseason game since Game 4 of the 2009 Conference Finals (4-1 L vs. PIT).

Twelve days after clinching first place in the Western Conference standings, the Flames square off with the Avalanche at Scotiabank Saddledome. The franchises have never previously met in the Stanley Cup Playoffs, however the clubs are linked with almost 70 different players having appeared in at least one game with both teams (regular season and/or playoffs) – notably Jarome Iginla, Theo Fleury, Owen Nolan and Alex Tanguay.

* The Flames-Avalanche series offers a showcase for two of the NHL’s most exciting talents, Calgary’s Johnny Gaudreau and Colorado’s Nathan MacKinnon. Both players set career scoring highs this season, each posting 99 points (Gaudreau: 36-63—99, MacKinnon 41-58—99). Both also enter the postseason on a roll, MacKinnon finished the season with a seven-game point streak (4-4—8) and Gaudreau a six-game run (1-6—7).