* The Hurricanes and Jets struck early to establish franchise records for fastest goals to start a playoff game.

* Jaden Schwartz scored with 15 seconds remaining in regulation to cap a multi-goal third-period comeback by the Blues. When a best-of-seven series is tied 2-2, the winner of Game 5 owns an all-time series record of 205-55 (78.8%).

* The Sharks scored five goals to stave off elimination and force a Game 6 in their First Round series.

GET TO YOUR SEAT EARLY

Thanks to early strikes from both the Hurricanes and Jets, Thursday marked the first day in Stanley Cup Playoffs history to feature multiple games with a goal in the opening 20 seconds. Sharks forward Tomas Hertl also scored 1:16 into their game with the Golden Knights.

* Hurricanes forward Warren Foegele scored 17 seconds into the first period to establish a Hurricanes/Whalers franchise record for fastest goal to start a playoff game, eclipsing the previous mark of 25 seconds set by Erik Cole in Game 6 of the 2002 Conference Semifinals (8-2 W at MTL). He also scored the fastest goal to start any playoff period in franchise history, five seconds earlier than the previous mark set by Ray Whitney in the final frame during Game 2 of the 2006 Conference Quarterfinals (0:22).

* Jets forward Adam Lowry scored 12 seconds into the first period to establish a Jets/Thrashers franchise record for fastest goal to start a playoff game, eclipsing the previous mark of 31 seconds set by Jacob Trouba in Game 5 of the 2018 First Round (5-0 W vs. MIN). Like Foegele, he also scored the fastest goal to start any playoff period in franchise history – six seconds earlier than the previous record set by Mark Scheifele in the final frame during Game 3 of the 2018 Conference Finals (0:18). 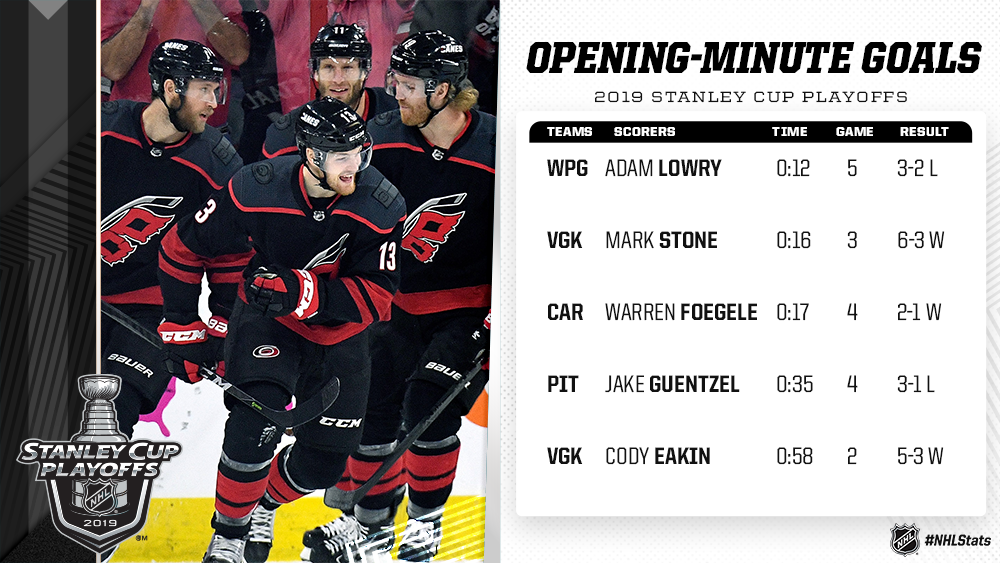 St. Louis overcame a 2-0 deficit in the third period and Jaden Schwartz scored the go-ahead goal with 15 seconds remaining in regulation as the Blues won Game 5 to take a 3-2 lead in their First Round series. St. Louis owns a 3-2 lead in a best-of-seven series for the first time since the 2016 Second Round – an eventual seven-game triumph over Dallas.

* Schwartz scored the second-latest game-winning goal in regulation in Blues playoff history, behind only Gino Cavallini at 19:51 of the third period during Game 3 of the 1990 Division Finals (5-4 W vs. CHI). He has scored 11 career goals in the Stanley Cup Playoffs (11-21—32 in 54 GP), including five game winners which trail only Brett Hull (15) and Larry Keenan (6) for the most in franchise history. 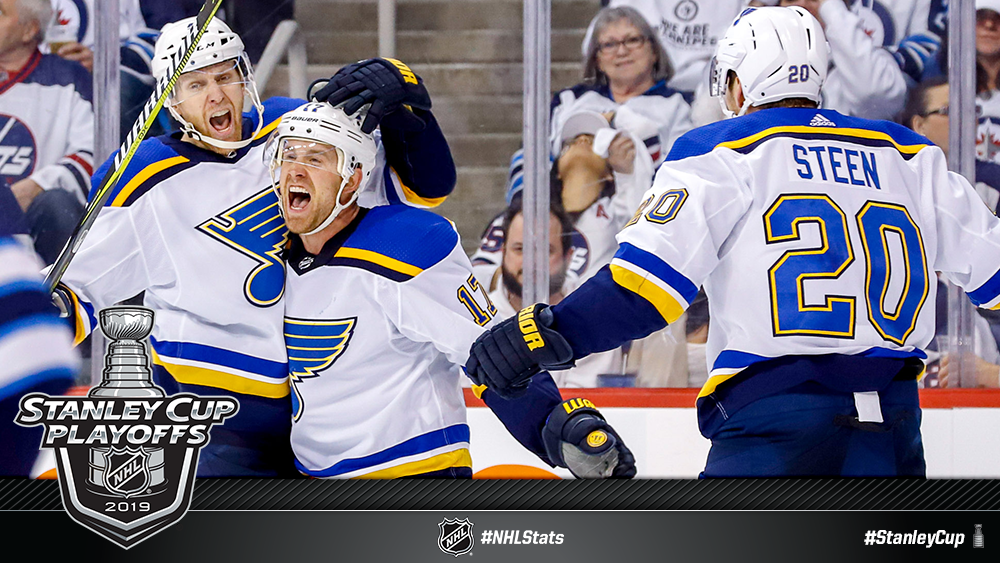 JETS-BLUES SERIES AS UNIQUE AS THEY COME

The Jets-Blues First Round matchup marked the fourth best-of-seven series in Stanley Cup Playoffs history in which the road team won each of the first five games. The others: the 1951 Semifinals (MTL-DET), 1995 Conference Finals (NJD-PHI) and 2004 Conference Finals (CGY-SJS). A best-of-seven Stanley Cup Playoffs series has never featured the road team winning each of the first six games.

* Each game in the Jets-Blues series has featured the victor overcoming a deficit to win. Only 10 other series in Stanley Cup Playoffs history have featured comeback wins in each of the first five or more games, including four in the last decade: the 2009 Conference Semifinals (PIT-WSH; 6 GP), 2012 Conference Quarterfinals (PHI-PIT; 5 GP), 2012 Conference Semifinals (NJD-PHI; 5 GP) and 2014 First Round (PIT-CBJ; 5 GP).

HURRICANES EVEN FIRST ROUND SERIES AT 2-2

Playing in front of a team-record crowd of 19,202, the Hurricanes built a 2-1 lead and executed a crucial penalty kill late in the third period  – which included a victory-preserving glove save by Petr Mrazek – to win Game 4 and pull even in their First Round series. Carolina evened a best-of-seven series 2-2 after losing the first two games for the third time in franchise history (also 1992 DSF vs. MTL and 2006 CQF vs. MTL).

Tomas Hertl scored twice while Joe Pavelski (1-1—2), Logan Couture and Barclay Goodrow each recorded one goal as the Sharks cut their First Round series deficit to 3-2 and forced Game 6. San Jose scored five or more goals in a game where it was facing elimination for the fifth time in franchise history and first since Game 7 of the 2016 Second Round – a 5-0 triumph over Nashville en route to the franchise’s first-ever appearance in the Stanley Cup Final.

* Joe Thornton collected his 99th career assist in the Stanley Cup Playoffs (28-99—127 in 164 GP). He moved within one of becoming the 24th player in NHL history to record at least 100 career postseason assists.

DID YOU KNOW?
Five First Round series in the 2019 Stanley Cup Playoffs will require no fewer than six games, meaning at least half of the opening-round series in each of the past 12 years have required six or more games. Overall, 70% of all series have extended to six or seven games since the division-focused format was introduced in 2014 (58 of 83).

^The Flames can also force a Game 6 tonight

The Avalanche aim to become the second team in the 2019 Stanley Cup Playoffs to knock off their conference’s top seed, while the Bruins and Maple Leafs look to put each other on the brink of elimination when their series shifts to Boston for Game 5.

* Dating back to expansion in 1967-68, there have been a number of playoff formats: division-based, conference-based and for two seasons (1979-80 and 1980-81) the top 16 teams were seeded by regular-season points. In none of those instances have the top two teams in each division or conference or the teams with the two best records been eliminated in the first round.