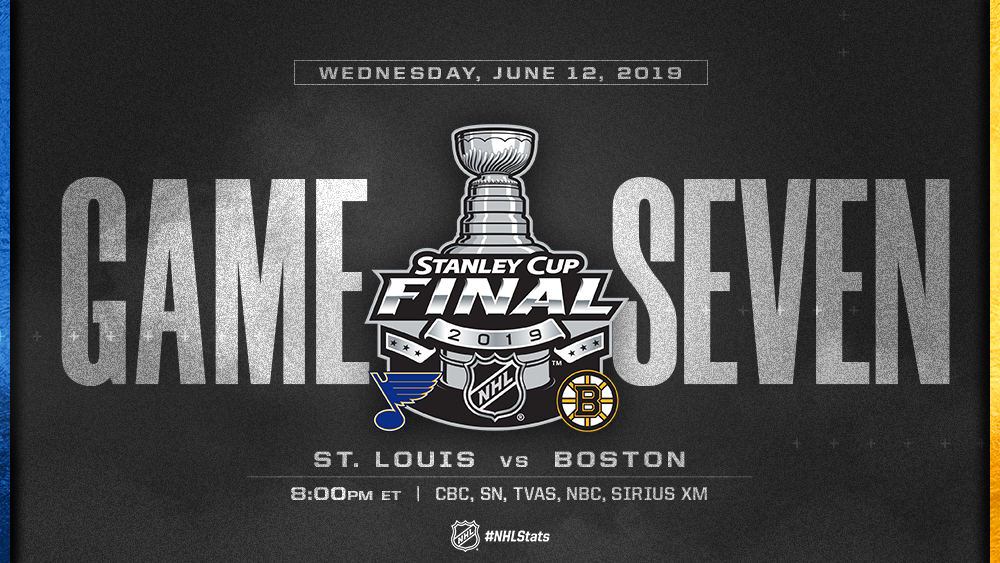 * The Bruins defeated the Blues to force the first Game 7 in the Stanley Cup Final since 2011 - when Boston also forced the decisive contest before claiming their sixth and most recent championship.

* The Bruins will host a Game 7 in the Final for the first time in their 95-year history, while the Blues will aim for an NHL record-tying 10th road win in 2019 to claim the first Cup in their 52-year history.

* Wednesday will mark the 17th time that the Stanley Cup Final will be decided in a Game 7.

Tuukka Rask made 28 saves while Brad Marchand (1-1—2), David Pastrnak (1-1—2), Karson Kuhlman, Brandon Carlo and Zdeno Chara each scored to help the Bruins force a Game 7 in the Stanley Cup Final for the 17th time in history. It will be the first such contest since 2011 when they also extended the series with a Game 6 victory en route to winning the Stanley Cup in Vancouver. 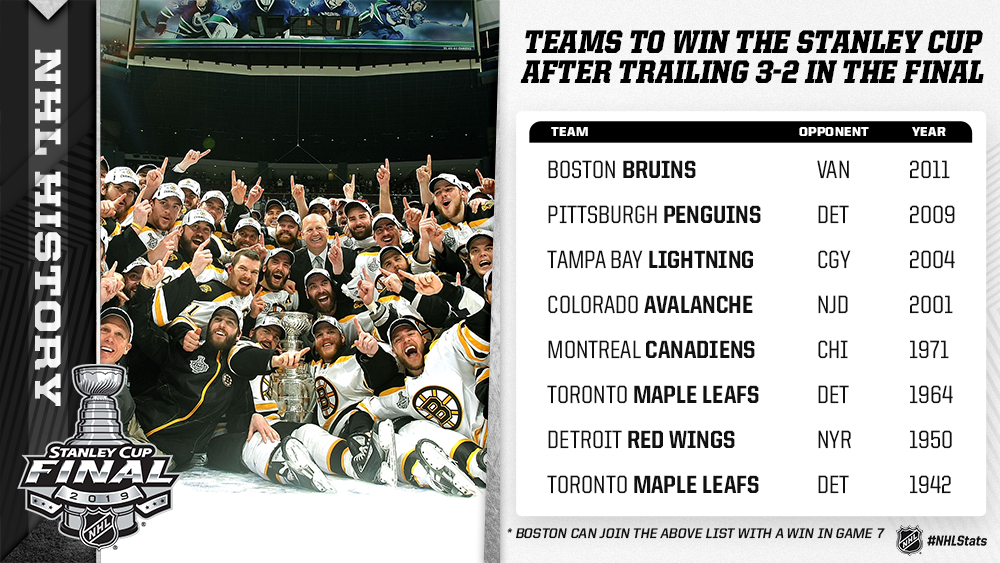 * The Bruins aim to become the ninth team in NHL history to overcome a 3-2 series deficit in the Final – another feat last achieved by them in 2011.

* Boston will host a Game 7 in the Stanley Cup Final for the first time in its 95-year history - despite playing the most Game 7s in NHL history (27 excluding this round).

RASK CONTINUES STELLAR PLAY AS A VISITOR, IN ELIMINATION GAMES

* Rask, who earned his 50th playoff win overall, improved his career road save percentage to .937 in the postseason - the best among goaltenders since 1955-56 when shots on goal became an official NHL statistic (min. 30 GP on road). His career 1.97 goals-against average as a visitor in the playoffs is the second-lowest in NHL history (min. 30 GP) behind only Turk Broda (1.87 GAA).

Boston veterans Brad Marchand (1-1—2), Zdeno Chara (1-0—1) and David Krejci (0-1—1) – three of the four current Bruins skaters who won the Stanley Cup in 2011 – each found the score sheet on Sunday. Krejci, Marchand and Patrice Bergeron each rank among the top five in franchise history for career points when facing elimination, with the trio trailing only Ray Bourque (6-30—36 in 34 GP).

* Chara (42 years, 83 days), who received a standing ovation prior to Game 5 when he returned to the Boston lineup wearing a jaw protector, became the second-oldest player in NHL history to score a goal in the Stanley Cup Final. Mark Recchi - Chara’s teammate on the Bruins’ last Cup winner - is the only player older than Chara to score in the Final. Recchi scored a total of three goals at age 43 in 2011 against Vancouver.

* Karson Kuhlman (1-0—1), who skated in his first game since the Second Round, became the 21st different Bruins player to score at least one goal in the 2019 Stanley Cup Playoffs - matching an NHL record. The Blues have received a goal from 19 different players this postseason, with Zach Sanford and Jay Bouwmeester their only skaters without one.

* Brandon Carlo (1-0—1) scored his second career goal in the Stanley Cup Playoffs (2-2—4 in 23 GP), with the first occurring in Game 4 of the Final. He became the 18th defenseman in NHL history to score each of his first two career playoff goals in the Stanley Cup Final and first since Colorado’s Jon Klemm in 1996.

* Torey Krug (0-1—1) leads the NHL in assists (16) and all defensemen in points (18) this postseason, including 1-5—6 in the Final. His six points against St. Louis are two shy of the franchise record for most in a Stanley Cup Final by a defenseman. The only defensemen in franchise history with more points in a single postseason are Ray Bourque, Bobby Orr and Brad Park.

* Alex Pietrangelo notched his team-high 15th assist of the postseason to match Federko (1982) for the single-year franchise record. Pietrangelo already holds the Blues records for assists (15) and points (17) by a defenseman in a playoff year. Krug (2-16—18) is the only player with more assists and the only defenseman with more points than Pietrangelo this postseason.