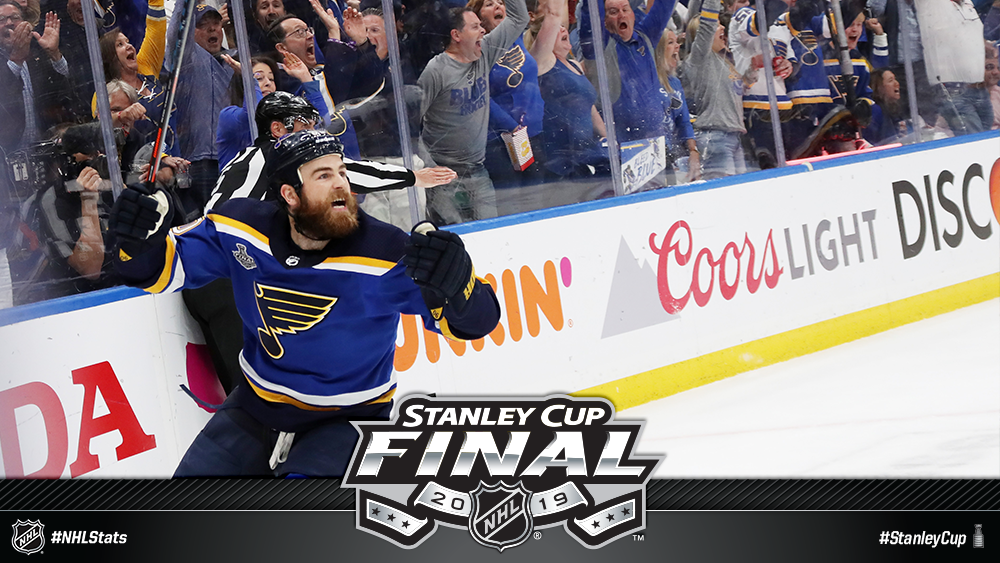 * Ryan O'Reilly rose to the occasion and netted his first career multi-goal game in the postseason to help the Blues even the Stanley Cup Final at two games apiece.

* Jordan Binnington bounced back yet again to inch closer to matching the NHL record for wins by a rookie in a single postseason.

After Blues legend Brett Hull hyped up fans before Game 4, forward Ryan O'Reilly scored the first of his two goals just 43 seconds into the contest to help St. Louis even its series with Boston at two games apiece. O’Reilly’s second goal came after the Bruins tied the game twice and stood as the game-winner in the Blues’ first-ever home win in the Stanley Cup Final.

O'Reilly, who came inches away from a shorthanded goal in the second period, became the second player in franchise history to record a multi-goal game in the Stanley Cup Final. Red Berenson scored twice in Game 3 at Montreal during the club’s first-ever trip to the Final in 1968.

* In his first season with the Blues, O’Reilly posted his first career multi-goal game in the playoffs. It was also his third multi-goal game with St. Louis following two such performances during the regular season - both in a span of 11 days in November, the latter of which came in a game the Blues started as the second-lowest ranked team in the entire NHL. He went on to set career highs in goals (t-28), assists (49) and points (77) and was voted a finalist for both the Lady Byng Trophy and Frank Selke Trophy.

* O’Reilly started the game with the eighth opening-minute goal of the 2019 Stanley Cup Playoffs. Three of those have been scored by the Blues, with the team improving to 3-0 in those contests.

With the series tied at two games apiece, the Stanley Cup Final is guaranteed to return to St. Louis for Game 6 on Sunday. This marks the 10th time in the last 12 years (and 41st time overall) that the Final will require at least six games.

* Boston holds an all-time series record of 14-3 when winning Game 5 after being tied 2-2 in a best-of-seven, while St. Louis is 8-1. The Bruins have been tied 2-2 in the Final on four previous occasions, losing Game 5 each time - but winning the Cup once (2011 vs. VAN). The Blues will play a Game 5 for the first time ever in the Stanley Cup Final.

Rookie Jordan Binnington made 21 saves for yet another rebound performance after allowing five goals in Game 3. Binnington, who moved within one of matching the NHL rookie record for most wins in a single postseason, improved to 7-2 following a playoff loss (1.86 GAA, .933 SV%).

* Binnington is the sixth netminder in League history to earn at least seven wins following a playoff loss within a postseason. Ron Hextall was the first goaltender ever to do so, posting a 8-2 record after defeat in 1987 en route to winning the Conn Smythe Trophy.

* Vladimir Tarasenko scored his 11th goal of the 2019 Stanley Cup Playoffs and 33rd of his playoff career (67 GP). Tarasenko needs two goals to both tie Brett Hull (13 in 1990) for the single-postseason franchise record and match Bernie Federko (35) for the second-most career playoff goals by a Blues player.

* Having already set the franchise record for points by a defenseman in a single postseason, Alex Pietrangelo (0-2—2) established a new benchmark for assists in a playoff year for a St. Louis blueliner. Pietrangelo notched two helpers to bring his total to 13 this postseason, tying Ryan O'Reilly for the team lead. The franchise record for assists in a single postseason by any player is 15 (Bernie Federko in 1982, 10 GP).

* Pietrangelo played nearly half the game, leading all skaters with 29:37 time on ice. The only two games in which he logged more ice time in 2018-19 were the double-overtime Game 7 win over Dallas in the Second Round (35:20) and the overtime loss to San Jose in Game 3 of the Western Conference Final (31:57).

* The Blues captain anchored a penalty-killing unit that snapped the Bruins’ power-play goals streak at seven games (tied for the franchise record). Pietrangelo logged a team-high 3:11 while shorthanded - 1:04 more than any other St. Louis player - to shut down a Boston power play that entered the game scoring at a 50.0% clip on the road and 35.9% rate overall.

The Bruins tied the game twice, with Charlie Coyle scoring his ninth goal of the 2019 playoffs - tied with Patrice Bergeron for the team lead - while Brandon Carlo scored shorthanded - his first career playoff goal (21 GP).

* Carlo scored the first shorthanded goal by a defenseman in the Stanley Cup Final in 19 years, with Scott Niedermayer the last to do so in Game 6 of the 2000 Final with New Jersey.

* Carlo also joined Serge Savard (1968), Bob Turner (1962) and Bucko McDonald (1936) as the only players to score their first career playoff goal while shorthanded in the Stanley Cup Final. Each of those players happened to be defensemen.

* Overall, it was the 10th shorthanded goal by a defenseman in Bruins playoff history.