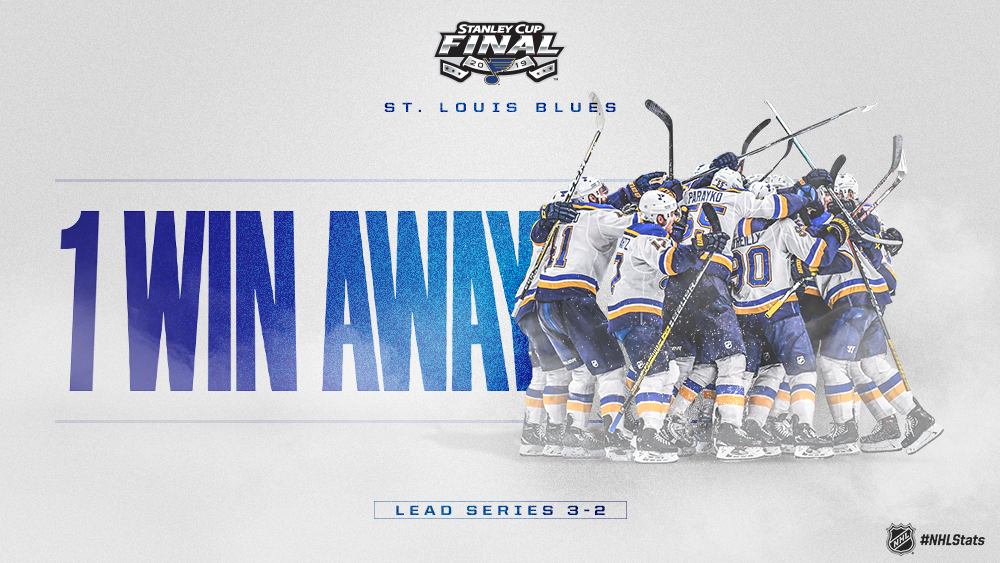 * The Blues defeated the Bruins in Game 5 to move within one win of the franchise’s first Stanley Cup in its 52-year history.

* Jordan Binnington made 38 saves to earn his 15th victory of the 2019 Stanley Cup Playoffs and match the single-year postseason record for wins by a rookie goaltender.

* Ryan O’Reilly factored on both St. Louis goals to become the third player to reach the 20-point mark this postseason.

Jordan Binnington stopped 38 of the 39 shots he faced to lead the Blues within one victory of the franchise’s first Stanley Cup in its 52-year history. St. Louis - which hosted a sellout watch party at Enterprise Center - can clinch its first championship at home in Game 6 on Sunday (8 p.m. ET, NBC, SN, CBC, TVAS).

* The Blues, who ranked last in the NHL standings through games of Jan. 2 (37 GP), can become the first team in the expansion era (since 1967-68) to sit last in the overall standings at any point after its 30th game and rebound to win the Stanley Cup.

* The Blues now own a 3-2 lead in a best-of-seven series for the 14th time in franchise history (and third time this year). St. Louis is 11-2 (.846) in the previous 13 instances, with their two losses coming in the 1996 Conference Semifinals vs. DET and 2003 Conference Quarterfinals vs. VAN.

* Overall, teams with a 3-2 advantage under the best-of-seven format own a 315-87 series record (.784) in NHL history, including a 32-8 clip in the Stanley Cup Final and 5-4 mark in 2019. St. Louis and Boston are responsible for two of those comeback victories this postseason, with the Blues achieving the feat in the Second Round vs. DAL and the Bruins doing so in the First Round vs. TOR.

Jordan Binnington, a third-round pick (87th overall) in the 2011 NHL Draft who did not make his first NHL start until Jan. 7 of this year, improved to 15-9 in the postseason (2.46 GAA, .913 SV%, 1 SO) to match the single-year playoff record for wins by a rookie goaltender. Three of the prior four won the Stanley Cup.

Nine of Binnington’s 15 wins this postseason have come on the road, moving him ahead of Ron Hextall (8-5 in 1987 w/ PHI) for the most such victories by a rookie goaltender within a single playoff year. Binnington can match the overall record for road wins by a goaltender in a single postseason should the series extend to a Game 7.

* Binnington’s 38 saves were two shy of the most on record by a rookie goaltender in a Stanley Cup Final game that ended in regulation: 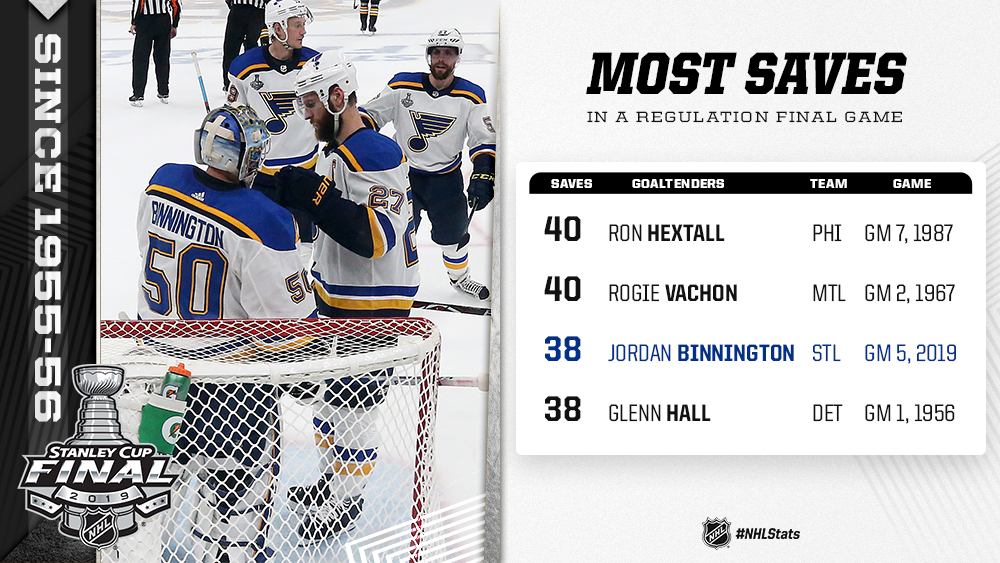 * The Blues’ rise to playoff contention aligned with the first NHL start for Binnington, who burst onto the scene Jan. 7 with St. Louis sitting last in the Western Conference, nine points out of a postseason berth. Binnington - a finalist for the Calder Memorial Trophy - posted a shutout in that first start and finished the regular season with a 24-5-1 record, leading the NHL in goals-against average (1.89) and ranking fourth in save percentage (.927).

Ryan O'Reilly factored on both St. Louis goals in Game 5, opening the scoring 55 seconds into the middle frame and assisting on the winner by David Perron at 10:36 of the third period.

* O’Reilly, who had 2-0—2 in Game 4, scored at least one goal in consecutive games for the first time since March 6-7 (2-1—3) and has collected at least one point in each of his last four contests dating to Game 2 of the series (3-3—6). Only one player in franchise history has recorded more career points in the Stanley Cup Final: Frank St. Marseille, who had seven through three Final appearances with the Blues from 1968-70 (4-3—7 in 12 GP).

* This marked the fourth time in five games that the final score was decided by one goal, or two following an empty-net strike. Overall, the 2019 Stanley Cup Final has been tied or within one goal for 83.6 percent of total playing time (254:01 of 303:51).

* The Blues became the first team to string together consecutive victories in the series and now will look for their third three-game winning streak of the 2019 Stanley Cup Playoffs (also April 18-25 and May 17-21). The Bruins have not lost three straight games (regular season or playoffs) since March 10-14 (0-3-0).

* St. Louis captain Alex Pietrangelo collected his 14th assist of the 2019 Stanley Cup Playoffs (2-14—16 in 24 GP) to extend his franchise record for most in a postseason by a defenseman. Only one Blues forward has recorded more assists in a playoff year: Bernie Federko in 1982 (3-15—18 in 10 GP).

* Zach Sanford (0-1—1) has collected an assist in all three contests since returning to the Blues’ lineup in Game 3. A native of Salem, Mass., Sanford played two seasons at Boston College (2014-15 and 2015-16) – helping the Eagles capture the Beanpot in his final year.