Welcome to Saturday and the usual thoughts running through my muddled mind.  As always, they come in no particular order 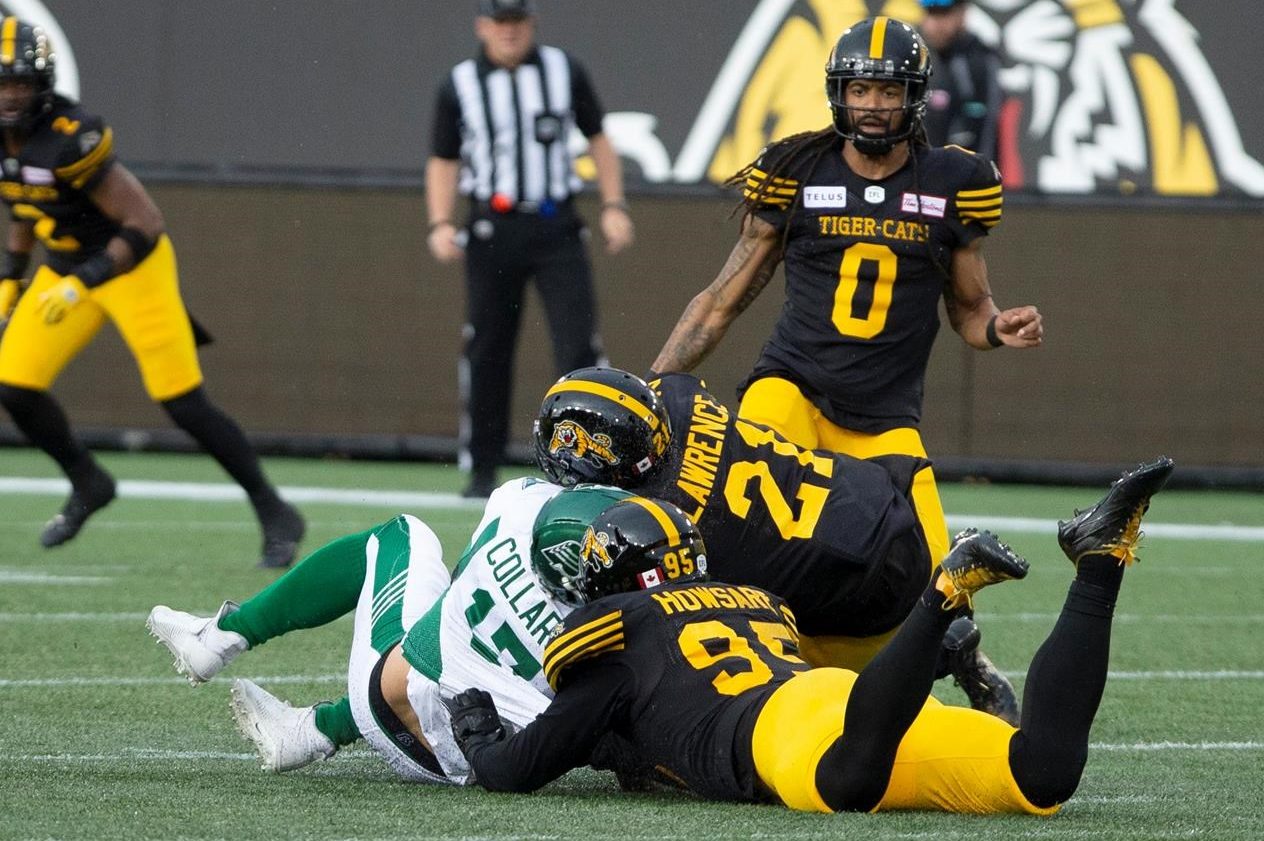 --All it took was three plays.  Three plays!  Zach Collaros suffered what looked to be another concussion and the Rider fortunes in 2019 took a serious hit.   Yes, head coach Craig Dickenson said Zach appears to be fine, but one has to wonder and one has to say again that if he has been concussed, it is time to do what he should have done in the off-season and call it a career.  Enough of the scrambled brains Zach.  You have a life after football you should start enjoying.

As for Simoni Lawrence, what a gutless play by someone who has a resume of those.  The CFL sat there and told us player safety is being taken more seriously and a 25 yard penalty will deter this behaviour.  Yeah, OK!  It took three plays for that theory to be blown out the window.  The debate was even on as to whether or not Cody Fajardo took a helmet-to-helmet in shortly after entering the game.

Do I have any faith that the league will hand Lawrence a multi-game suspension for what he did?  Nope!  If Odell Willis and Jackson Jeffcoat didn't get one for what they did in the last two Rider games last year, why should Lawrence get one?   It's the CFL way isn't it?

As for the game itself, it reminded me a lot of last year.  The defence sparkled while the offence struggled although they had their moments under rookie Isaac Harker.  I am sure if Collaros can't go in Ottawa next week, the call will be made for Harker to start.  I don't know if Harker is ready to start yet, and it certainly isn't time to push the panic button yet.  Some are calling for Kevin Glenn to make his retirement a short one and come back.  No one is asking for Brandon Bridge to return though.

Harker didn't look as if the moment was too big for him.  His interceptions came late in the game on a 3rd down scramble where he had to get rid of the ball and on a last-play hail mary.  Those aren't rookie mistakes.

Would the Riders have won with Collaros playing the full game?  I would say they would have.  I could say the same thing about Golden State in Game 6 if Klay Thompson had not gotten hurt.  More on that in a bit.

What did you think of Dickenson's debut?  With the exception of what I thought was a terrible call on 3rd and 2, I was OK with it. That call was too predictable and too vanilla. Didn't like that one at all.


--Of the nine teams in the CFL, only three have the same starter in 2019 that they had in 2018.  The three are Saskatchewan (Collaros), Hamilton (Masoli) and Calgary (Mitchell).  Winnipeg would have been a 4th, but remember Chris Streveler started on opening week in place of the injured Matt Nichols.  With that being said,  how would you rate the overall QB play in this league.

--It will be a Saskatchewan Summer with Stanley as Tyler Bozak, Jaden Schwartz and Brayden Schenn will be bringing hockey's holy grail with them to the 306.

--Having the chance to speak with both Mitch Bozak (Tyler's dad) and Rick Schwartz (Jaden's dad) before the final, I asked both what it would be like to see their son's name on the Stanley Cup.  They didn't know, but they will find out.  What a moment that would be!

There is nothing like seeing the Cup get presented and the look of players when they get it whether it be the first time or the last.   I don't know if it was the fact they won in Boston or not, but it seemed to me as if the Blues rushed it.  Remember when a guy would get the Cup and he would skate a lap around the ice with it before handing it off.  It seemed this year as if one player would get it, skate for a few feet and then circle back to hand it off.  NO!! Experience the moment.  Take that thing around and soak up every moment of it because it may never happen again.  Obviously, each player and person connected with the organization will get their time with the Cup, but in the moment, take as long as you want.  That moment is for you and its what you have dreamed of.

--The NHL off-season is here after nine months of play. Basically for fans and organizations, the season is like a pregnancy.  You have fatigue, nausea, vomiting, crying, morning sickness, mood swings and headaches.

--Now to the Raptors.   First off, how cool was it Monday night to be at Mosaic Stadium watching Toronto try to close things out.  There was no way I thought 14,000 people would pack the place to watch a basketball game.  It was amazing! 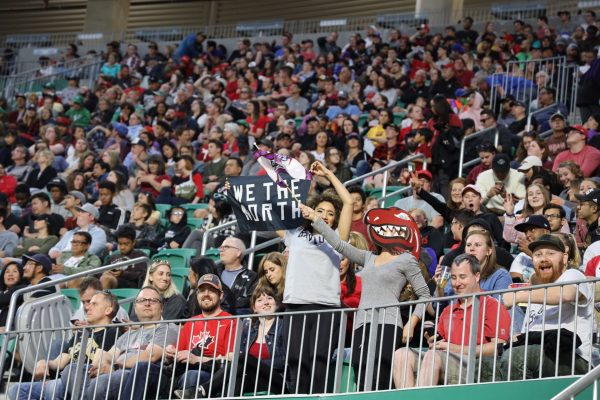 As one gentlemen said to me as I was leaving. I am used to cheering for three-pointers in this place, but not that type.  No kidding!   One thing that wasn't cool though was the fact MLSE apparently would not let teams like the U of R Cougars do anything to market their programs.  I don't understand that one, but to those who asked there's your answer.

With the Riders game Thursday, I knew the crowd would not be as great and certainly not what EVRAZ Place was looking for, but if a Game 7 had been played on Sunday, I think you would have had 25-30 thousand.  Not joking!

Like the rest of the series, Game 6 was tremendous.  Yes, it was too bad Klay Thompson could not finish things off, but a country was on pins and needles.  That being said, I just enjoyed the game for what it was.  There was no stress level for me.  A non-sports fan I know put up on Twitter that this was so stressful.   If you want a stress level for me, go back to Game 7 of the 2016 World Series.  That night that the Cubs won in extra innings just about killed me.  The basketball was great, but while the accomplishment is tremendous, I will say it again---the big winner in this is basketball in this country as a sport which is already producing many players will now produce a lot more

What was with the subdued celebration? I thought that team would go crazy, but really they didn't.  Not when you compare it to other cellys including St. Louis' one night earlier.

That's all I got.  Have a great weekend!


1. The CFL needs to come down on Lawrence with a minimum 3 game suspension. Make an example of him for others trying this BS.

2. While given a chance to appeal, the appeal should not stand. Make this penalty stick

3. What now at QB? Harker looked good, but can we really afford to have him and Fajardo as QB's moving forward if the plan is to win.

4. Monday at Mosaic was cool, but Thursday was a disappointment. That is the Riders influence for you. It's too bad the local rednecks can't look around and see there is more to life than the green-and-white.

5. Completely right on the celebration issue. Cmon Toronto, celebreate like your fans

It's Riders and nothing else in Regina, and that showed with poor crowd on Thursday night compared to Monday. Also, if your kid isn't going to be the NBA average 6'7" , then don't even think about making the NBA, regardless of skill.

95% of Rapter fans have been fans for 2 weeks, a life time in bandwagon weeks.

Fajardo's helmet hit was a result of him being tatoo'd to the turf (and his noggin bouncing) on a pass rush. As far as Dickie's debut...he made a number of mistakes and he will learn from it.

First half, should have taken the points instead of the third down gamble. The lost challenge was a bad choice on an iffy play. Playing musical QB's at the 5 yard line when Harker was on a roll. Gambling with 2 mins left.

The other notations...a special teams TD on a punt flipped the page, plus 4 missed points by Lauther. He makes the kicks and Harker is playing down to the 40 for a field goal instead of Hail Marying it. Hamilton was a winnable game. Ottawa is full of vinegar now and their home opener will be no picnic. 90% that Fajardo will start. I didn't like the signing at the time. I like it less now.

I am one of those fans that didnt watch all the Raptors games this year but really got pulled in during their playoff run. I suppose I am a bandwagon jumper and to those people that got upset by people like me who watched most of the Raptors games the last 2 weeks I am sorry not sorry!

Will you watch again next year right from opening night? That's the question! I hope you realized what a great game it is.

Will I watch again from opening night? No, at least I am being honest. nothing against the product, it was a fun run and I hope to see it happen next season, but like any other team that goes on a big run it draws in more interest and maybe some of that interest sticks. Why do people have to whine about casual fans or bandwagon jumpers? Has anything in the last few years brought this country together like this playoff run? If that level of new fans bothers people too bad!