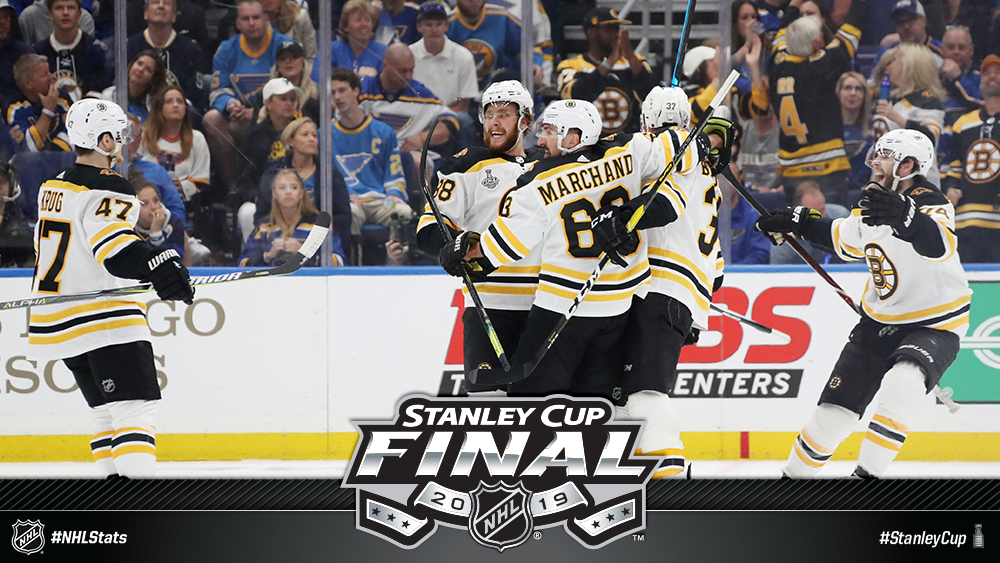 * The Bruins scored seven times - including four power-play goals - to take a 2-1 series lead as St. Louis hosted a Stanley Cup Final game for the first time in 49 years.

* Torey Krug (1-3—4) established a franchise record for points in a Stanley Cup Final game - achieving a feat last done by an NHL defenseman 25 years ago.

* “The Perfection Line” of Patrice Bergeron, David Pastrnak and Brad Marchand also found the score sheet as Boston set a franchise record with their seventh road win this postseason.

After going over six minutes without a shot on goal to start the game, the Bruins stormed into the second period with a 3-0 lead and scored seven goals in total - including four via the power-play - en route to a Game 3 win against the Blues. Boston holds a 2-1 lead in the Stanley Cup Final for the fourth time, winning two of the previous three such instances.

* The Bruins have scored a power-play goal in each of their last seven games, matching a franchise playoff record. Boston’s 23 power-play goals are one shy of tying the franchise record for most in one playoff year (24 PPG in 1991) and equal the highest total by any team since 2007 (the 2010 Flyers and 2009 Red Wings also had 23 PPG).

* Boston’s power-play success is the inverse of when they won the Cup in 2011, without much help from their power play. In the opening round that year, Boston became the first team in playoff history to win a seven-game series without tallying a power-play goal (0/21 vs. MTL). They entered the Eastern Conference Final converting on just 2 of 37 opportunities (5.4%) and concluded the postseason going 10-for-88 (11.4%).

Bruins defenseman Torey Krug tallied a goal and three assists - all via the power-play - to set a franchise record for points by any player in a Stanley Cup Final game.

* The 28-year-old became the ninth defenseman in NHL history to record at least four points in a game during the Stanley Cup Final - and first since Brian Leetch 25 years ago. Denis Potvin is the only blueliner with two such performances.

* Krug also matched the Bruins record for points by a defenseman in any playoff game, matching the total achieved by Brad Park (2x), Bobby Orr, Carol Vadnais and Zdeno Chara.

* Bergeron became the sixth player to accumulate at least 100 career playoff points with the Bruins, climbing into a tie with Phil Esposito for second place in franchise playoff history. He also scored his League-leading seventh power-play goal of the 2019 Stanley Cup Playoffs, two shy of the NHL record for most in a post-season. 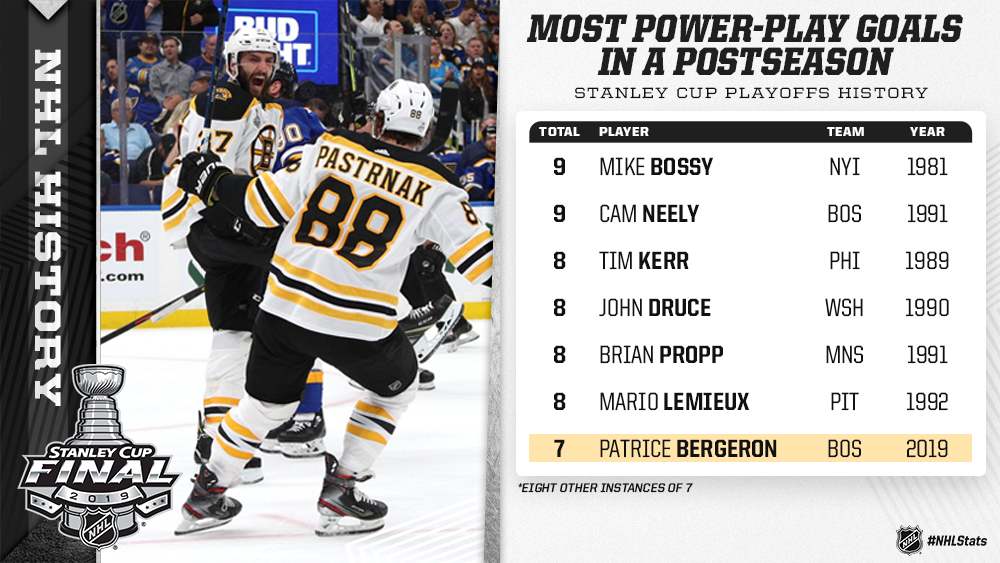 * The Bruins hold a 2-1 lead in a best-of-seven Stanley Cup Playoffs series for the 32nd time in franchise history. Boston owns an all-time series record of 22-9 in the 31 previous scenarios, including a 2-1 mark in the Stanley Cup Final.