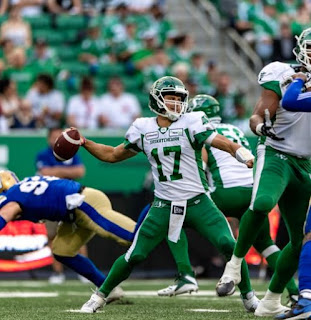 Collaros tossed two touchdowns and Nichols had one of his own as the Winnipeg Blue Bombers rallied for a 35-29 victory over the Saskatchewan Roughriders Thursday in the final pre-season game for both teams.


"Overall, I liked my reads, I made some good throws," Nichols said. "It's important to throw with live guys around you… I got to throw with some adrenaline. Overall, it was awesome to be out there and knock some of that rust off and be ready for Week 1."

Nichols completed 7-of-14 pass attempts for 163 yards in two quarters of play.

Collaros, like Nichols, saw his first exhibition action on Thursday. In his two quarters, he matched his counterpart with 163 yards on 10-of-15 passing.

"We just wanted to go out there and execute and I thought we did a pretty good job," Collaros said. "There will be things to clean up and things to assess when we're watching the film."

Collaros did not dress for the Riders in their first exhibition contest, a 37-1 loss in Calgary.

He missed four games due to injury in 2018, though he passed for 2,999 yards and nine touchdowns. He missed 17 games between 2016-17 when with the Hamilton Tiger-Cats.

Collaros' health will be paramount should the Riders make a run in the competitive West Division, home to the likes of Bo Levi Mitchell, Mike Reilly and Trevor Harris.

Saskatchewan's offence overall sputtered in 2018 and ranked seventh in the CFL in scoring, averaging just 19 points per game.

Veteran receiver Naaman Roosevelt, who caught four passes for 67 yards and a touchdown, is confident the Riders offence will have a better showing in 2019.

Nichols had a solid season with the Bombers, passing for 3,146 yards and 18 touchdowns. The Bombers averaged a league-best 28 points per game a season ago when Nichols led the team to a 10-8 record and a playoff berth. They lost to eventual Grey Cup champion Calgary in the West Final.

Both Bennett and Sean McGuire looked sharp under centre for Winnipeg. Bennett completed 5-of-7 attempts for 120 yards. McGuire was 6-for-8 for 77 yards.

The Riders will open the regular season June 13 at Hamilton. Winnipeg will take on the host B.C. Lions on June 15.


With the exception of the INT, I thought Collaros was good. Receivers were better than I expected. Don't know if its enough to beat Hamilton next week, but we'll see.


When is the last time the Riders won a pre-season game? I don't think they did under Jones!


Powell will lead the league in rushing this year if he stays healthy.

That o-line will open up some mammoth holes for him.


Just a complete joke that the Riders didn't stream this game for fans outside of Regina.

So much for being fan-friendly right?

Let's just say if Darren Dupont is involved, I'm not watching unless he has Reynolds on for a one-hour sitdown!!

Reynolds needs to be asked what he was thinking when he gave total control to a vagabond coach.