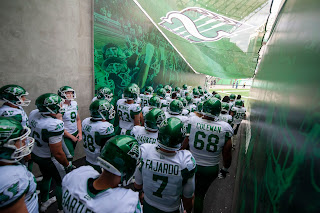 
--It's GO time.  The Saskatchewan Roughriders and the other eight CFL teams have made their final cuts and it is time to start getting serious about the 2019 CFL season which is now just a few sleeps away.

What surprised you about the Rider cuts?  I was expecting David Watford to be let go and it didn't surprise me to see Crezdon Butler get released either, but the deletion of Chad Geter did make me raise an eyebrow.  Nothing against Lavar Edwards who had a great camp and pre-season, but I really liked what Geter did last year and was looking forward to seeing what he could do in year 2.  If I do, it will be with someone else.

GM Jeremy O'Day said Saturday you always hope the best for someone when they get released and that's what the team wishes for Geter, but you also hope he doesn't come back and be an all-star because you look bad.  It's happened to all GM's past and present when it comes to situations like that.  It will happen again.  Sometimes the fit and scheme is better in a new location.

Other than those three, I wasn't really surprised with the cuts.  I am looking forward to seeing Jamal Morrow spell off William Powell in the backfield as I think the former Washington State Cougar can be a player in this league.  It already seems as if Rider Nation is in love with Isaac Harker and I understand that (see Brett Smith), but I don't think he will be your starter anytime soon.  The key is development which the team didn't do with Marquise Williams with Brandon Bridge and David Watford simply not developing or progressing as fast as what the organization wanted.

--A lot of people are up in arms over the fact the Riders did not live-stream their game Thursday seeing it wasn't televised. I understand that anger and yes, the football team could have done its fans (those outside of Regina) a favour by streaming the game.  However at the end of the day, IT WAS PRESEASON FOOTBALL!!  As I've always said, the passion is unequalled, but it also borders to being over the top.  This is just another example.  If your nite was ruined because you couldn't watch a pre-season game, so be it.  It wouldn't have bothered me at all.

--So now that we are ready to roll, where do you have the green-and-white?  No one is picking them for first or second---at least no one I have seen.  I have seen a lot of 3rd place, 4th place and last place finishes predicted and the arguments are all valid ones.  I will say it once and I will say it again.  If Zach Collaros can start 15 or more games as this team's QB, they will finish 3rd.  If he can't, the best they can do is be a crossover team.    I will say Calgary, BC, SK, WPG, Edm in the West.  In the East, they should just start making tickets for the Eastern Final in Hamilton now.  They are head and shoulders the best team in the East and they may end up with the best record in the league once the regular season concludes.  I will say Hamilton, Toronto, Ottawa and Montreal in the East.

--Now to the Alouettes.  My god what a tire-fire that is.  Some have suggested the Atlantic Schooners will be better than the Alouettes this year,  They might be right.  How can the team sit there and say Mike Sherman didn't understand the nuances of the Canadian game when the team let him coach through training camp and two exhibition games.  Where was this conversation a few months ago? At least Khari Jones now gets an opportunity to be a head coach, but is this what he envisioned when that day would come. I continue to wonder how Kavis Reed draws a paycheque from this team. So do many others.

--The Argos released Brandon Bridge.  Is there a market for him somewhere? His game regressed so badly for whatever reason last year that one has to wonder if this might be the end for him.  Hopefully it isn't, but you have to think it just may be.

--Congratulations to both Kerry Joseph and Neal Hughes for being the latest inductees into the Plaza of Honour, Selfishly, I would have loved to see KJ and Darian Durant get inducted in the same year, but KJ is overdue for getting in.  You won't meet a better individual.  Many of you know what I'm talking about.  As for Hughes, I can only wonder if he would have gotten a chance to run the rock what he could have done.  He was a monster with the Rams.  I always thought if he was the main guy he would have flourished.   Congrats again to both.

--Good on the city of Regina for A) getting into the spirit of what is happening with the Raptors by putting Game 4 on at City Square Plaza as was suggested by a certain blogger and B) Moving Game 5 to Mosaic Stadium for what could be an historic night.  I would think you could get 5000 into the stadium for this one.  What an atmosphere it will be!  The Galaxy Cinema at the Normanview will have the game as will every sports bar in town.  The U of R should open up the gym for students to watch and others should do what they can to get it on as well.   You also had better hope Toronto wins because Game 6 is Thursday.  Isn't there something else going on that night?  Oh yeah!   A Toronto loss in Game 5 will certainly mean the enthusiasm will have died down somewhat for Game 6----at least until the Rider game is over.

--St. Louis was ready to party, but the Bruins had other ideas.  We will go to a Game 7 to decide the Stanley Cup as the two teams will meet in Boston Wednesday.  Who ya got? Many believe St. Louis had their chance and blew it.  I wouldn't argue that, but how many times has St. Louis been counted out in these playoffs only to come back and win.   I think Game 7 will be one to remember.  I have no idea who wins.   It would be great though to see Team Saskatchewan come through so that we could get another good look at the Stanley Cup thanks to Jaden Schwartz, Tyler Bozak and Brayden Schenn.

If St. Louis should lose, the St. Louis Post-Dispatch will have some red faces after putting congratulatory messages and up and telling people about the parade route in its Sunday digital edition.  That's a big-time oops!

--If Boston wins Game 7, there is no doubt Tuukka Rask is the Conn Smythe Trophy winner.  If St. Louis wins, I have no idea as it will be between Jaden Schwartz, Ryan O'Reilly and Jordan Binnington.

--If you watched UFC 238, you had to cringe somewhat at Donald Cerrone's face.  That's what happens when you blow your nose when you shouldn't kids!

--If the Raptors win, it will mean there are two Toronto teams who were born after the Leafs last Stanley Cup win that have climbed the top of the mountain before the hockey team.  That brings some happiness to this blogger.

--Congratulations to the Regina Riot for going into Winnipeg and winning a big road game as they try to get to the national final which goes at the end of the month at Mosaic.

I need pre-season football. I need a 2nd Garth Brooks show. The whining in this city is second to none.

If you wanted pre-season football, go to the game. If you didn't get a GB ticket, too bad!


St. Louis wins Game 7 in OT on a Schwartz goal!


Very generous taking the Riders for 3rd. Hope you're right, but I can't see it