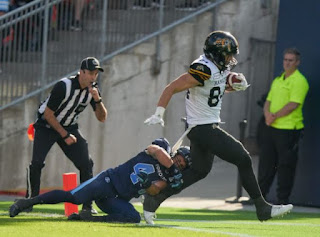 --Disagree if you will, but I thought the weekend games of CFL football were just plain bad. Yes, part of that is because it's still early in the season and you can't expect Picassos, but the Riders-Ottawa game was by far and away the best one of the three-game weekend.  Why was it there were only three games again? In a nine-team league, there should be four games per weekend.  End of story! I digress.

I may have to re-think my stance on the BC Lions being the second-best team in the West.  This is a team that paid 700k to have Mike Reilly as their starting quarterback and the collective total of the money being paid to the o-line might be $70.  Reilly was beaten up terribly by the Eskimos defence in his return to Commonwealth Stadium Friday.  Yes, it is only two games in, but if Reilly is going to be "protected" like that, he won't last the season.  Maybe Devone Claybrooks needs to have Duron Carter play o-line.

Of course, I am used to having a quarterback not have a quality offensive line around him as I see Russell Wilson get pressured and sacked wayyyyy too much with the Seahawks.  The only difference is at least Russell can move around a little.  Reilly can too, but he isn't as elusive as Wilson.

--As for the Argos.  OMG! For a team trying to capture some sort of foothold in the Toronto market, this was not the way to do it.  That was beyond horrible and they had a Week 1 bye.  That was like watching a train-wreck. What now?  Maybe the Argos need to get Kawhi Leonard to a game.  The performance makes one think the Riders game against Toronto on Canada Day should be a slam-dunk, but we have seen what has transpired when that scenario presents itself (rewind to last year's home game against Montreal).   I think the Riders can go into that game knowing Toronto can't be any worse than what they were against Hamilton.

--Congratulations to the Regina Riot for a big road win in Edmonton.  It means they will play the Saskatoon Valkyries for all the marbles next weekend in Regina.  What type of crowd can Mosaic get for that one?

--The NHL Draft has come and gone and for the most part despite a lot of talk before it about this player moving and that player moving, it was rather uneventful.  PK Subban's career is now moving from Nashville to New Jersey.  It's no secret I am not a Subban fan and haven't been since his days in Montreal.  I don't think he is as good as advertised.   Being in the shadows of New York City, will he be more interested in promoting himself or helping the Devils try to win a Cup.  Sadly for New Jersey fans, I don't think its the latter.

--Its far too early to talk about players who were taken and who will have the biggest impact.   Some in Chicago feel the Hawks shouldn't have taken Kirby Dach.  As is the case with just about everyone, we will find out who made the grade and who didn't in the next 2-3 years. Personally, I think the steal of the first round was the Habs getting Cole Caulfield at 15.  Add him to the likes of Nick Suzuki and Ryan Poehling and Montreal may have some offence in the next couple of years.

--The Leafs had to give up a first rounder just to send Patrick Marleau to Carolina? Perhaps now we know why the Oilers won't be getting rid of Milan Lucic anytime soon.   Yes, that pick will likely be a high first round pick, but you couldn't have shed a 3rd or 4th round pick.   That my friends is today's NHL.   At the end of the day, shedding the salary means the chances of keeping Mitch Marner are high, but still.

--At the end of the day, the WHL led the way in players drafted with 28 including seven in the first round. The league may struggle when it comes to the Memorial Cup for whatever reason, but I will say it again, there is no better developmental league in the world than what we have in our backyard. It is why the product should be enjoyed whether your team is atop the ladder or not.  The stars of tomorrow are available right now so take it in when the chance arises.  By the way, would you like to see the stars of the WHL, OHL and Quebec league take on the US National Development Team that had so many players drafted.  I would much rather watch that than Canada-Russia.  How do we make that happen?

--It's no secret I am not a Marcus Stroman fan.  He was at his "best" again Sunday as he felt it was appropriate to scream at the Boston Red Sox dugout after a strikeout to end the 6th. You can argue that all you want to, but the fact Stroman was criticized by Dennis Eckersley for his antics was a tad hypocritical.  Eckersley was famous for celebrating strikeouts and letting batters and the opposition know about it.  One remembers the Robbie Alomar homer off of Eck in the 92 ALCS which came an inning before he let I believe it was Ed Sprague have it.  Criticizing Stroman is fair in this situation, but the guy doing the criticizing shouldn't be the guy who was specializing in trash-talk on the mound during his day.

--Why is it so many local online clothing companies only go as high as XXL?  They are losing out.  Can't shop local when the product while desirable isn't what you want.   There is a lot of good stuff coming out these days as well.  Oh well!

--Pete Paczko and I will put the wraps on another season of "Locker Talk" Tuesday night.  As the guests come into Access Communications every Tuesday night, I am reminded of how diverse Regina's sports community is.  There is an awful lot we should be proud of in this city and a lot of people we should be proud of whether it be athletes, coaches, volunteers whatever.  When it comes to local sports, we are a community that has many stories to tell.  Take a bow!

Ya had to bring up the Montreal game last year didnt'cha! Thanks Scruff!!


Good for the WHL and good for Carson Focht and Harrison Blaisdell to inch one step closer to their dreams!


Was surprised to see Dach get taken ahead of Turcotte. Will be interesting to see how these two fare in the coming years.


After what I saw from the Riders and Argos this weekend, if SK doesn't win by 17, we have a problem

Each team has to have 3 bye weeks per season. If you only had 1 team off each week it would take 27 weeks to complete the regular season as opposed to the 21 it is now. Unless you want the grey cup played in late January this is the way its gonna be.

All I wear is 2XL shirts and they're hard to find