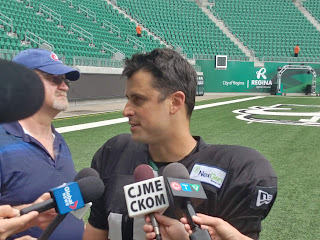 When asked what he thought about the hit, Dickenson said it was worthy of a 25-yard penalty, but he would go no further than that.

When it comes to who the quarterback will be Thursday in Ottawa, Dickenson says Cody Fajardo and Isaac Harker will fight it out to see who gets the start.

I am so disgusted by Rider management that re-signed Collaros. So many people feared for this player's safety and even life. Now his long-term health is at major risk and the team is screwed for 2019.


Apparently the team reached out to Glenn, but the $$$$ weren't even close to what he was looking for.

Hope for the best, prepare for the worst.


I like Bennett, but he isn't the answer now. If Collaros is done, they win 6 games max this year.