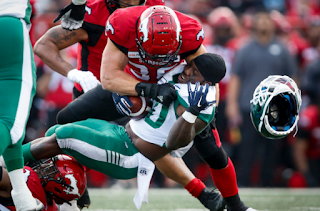 Things did not go well for the Saskatchewan Roughriders as they opened the pre-season in Calgary getting beat 37-1 by the Stampeders.

At one point, it was thought the game may not be played because of heavy smoke in Calgary from the forest fires in Northern Alberta, but it did get underway after a half-hour delay.

Bo Levi Mitchell wasted no time in getting his offence rolling, testing the Riders secondary on the first drive by connecting with Reggie Begelton on back-to-back plays,  but they could not get the ball in the endzone resulting in a Rene Paredes field goal

Mitchell’s day would be done following two drives on offence, but not before he’d complete three of five passing for 85 yards.

Coming in for the reigning Grey Cup MVP, Nick Arbuckle kept the ball in the air for Calgary, hooking up with Juwan Brescacin for 38 yards before plunging his way into the end zone to give the Stamps their first touchdown of the evening.

Cody Fajardo was one of the few bright spots for the Riders as he was 10 of 12 for 73 yards while running the ball for 32 yards.

Head Coach Craig Dickenson liked what he saw in the first 30 minutes, but he didn’t like the effort put forth in the second half.

“I was disappointed with our second half.” Dickenson said. ” I thought we stayed with them in the first half, but while we were still down I thought we were competing, but I didn’t feel that way in the second half.  We got a lot of work to do and I have got to get them in better shape.”

The Riders will have one last chance to evaluate what they have before it starts for real as they are home to Winnipeg on Thursday, June 6 in a 7 o’clock start.

Ugly doesn't even start to describe that mess.

I realize those were our backups, but that was sad.


Are cuts being made this weekend? There are many who likely won't be playing for the Riders again anytime soon after that display. The 2nd half was god-awful!


Who was that kicking the ball instead of Lauther? God help us if Lauther gets hurt and he has to kick.

Our team is only as good as its first stringers, once they get injured the riders are in deep do do, our gm is a joke , he can't find players unless they are past their due date. We are an old team and getting older, I see more telethons in the future, maybe we should have the NFL teams here and see how real teams are run

Calgary just trots more and more young guys out there on both sides of the ball that make plays.

We trot more and more young guys out there who look like they would have a tough time competing against the Riot. So disappointing!