Paul Stastny (2-1—3) and Mark Scheifele (2-0—2) each scored twice to help the Jets defeat the Predators in the decisive Game 7 at Bridgestone Arena and advance to the Conference Finals for the first time in franchise history.


The Predators (53-18-11, 117 points) and Jets (52-20-10, 114 points) finished atop the overall League standings during the regular season, marking the 15th time in the NHL’s expansion era (since 1967-68) where the teams who finished first and second place met in the postseason. The winner of the previous 14 series went on to ultimately capture the Stanley Cup each time, including last year when the second-ranked Penguins ousted the top-ranked Capitals in the Second Round.* The Jets became the fourth team in the last five years to earn a Game 7 victory against the Presidents' Trophy-winning team, joining the Penguins in the 2017 Second Round vs. WSH, the Lightning in the 2015 Conference Finals vs. NYR and the Canadiens in the 2014 Second Round vs. BOS.* The Jets earned three of their four wins in the Second Round at Bridgestone Arena, posting their Game 7 victory on the heels of a 4-1 win in Game 1 and a 6-2 win in Game 5. Elias notes that Winnipeg became the fourth team in NHL history to earn at least three road wins in a series each by a margin of three-plus goals, joining Detroit in the 2010 Conference Quarterfinals vs. PHX, Chicago in the 2010 Conference Semifinals vs. VAN and Pittsburgh in the 2018 First Round vs. PHI.* Elias adds that the Jets, who suffered a 4-0 loss at Bell MTS Place in their last outing, became the second team in NHL history to rebound from a Game 6 shutout loss at home with a Game 7 win on the road. Winnipeg joined the Toronto Maple Leafs, who accomplished the feat against the Detroit Red Wings in the 1945 Final to capture the Stanley Cup.* The Jets will face the Golden Knights in the Western Conference Final, with Game 1 slated for Saturday at 7 p.m. ET in Winnipeg (CBC, NBC, TVA Sports). This marks the first time that two franchises will meet while each making their first-ever appearance in the Conference Finals since 2003, when Anaheim defeated Minnesota in four games. 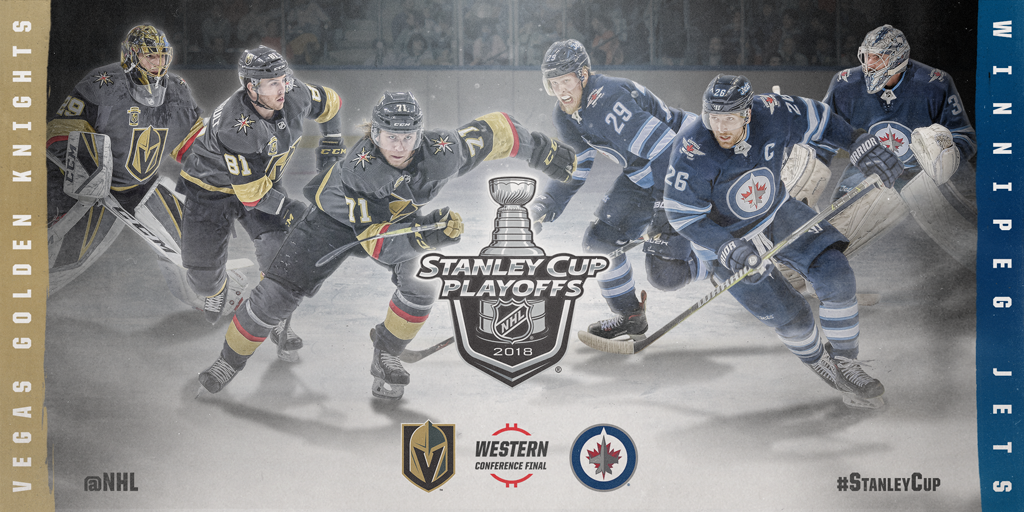 Jets forward Mark Scheifele leads the League with 11 goals in the 2018 Stanley Cup Playoffs (11-5—16), including seven in Winnipeg’s Second Round series (7-4—11). All seven of his goals against the Predators were scored at Bridgestone Arena.

* Scheifele established a Stanley Cup Playoffs record for most road goals in a single series, eclipsing the mark of six last achieved by Marian Gaborik in the 2014 Second Round vs. ANA (w/ LAK).
TASTNY CONTINUES GAME 7 DOMINANCE
Jets forward Paul Stastny, acquired from the Blues at the 2018 Trade Deadline, has collected 4-4—8 in four career Game 7 appearances (2.00 P/GP). He scored his second career series-clinching goal in a Game 7 and first since the 2016 Second Round at DAL (w/ STL).

* Twenty-nine current NHL franchises have played in a Game 7. The Jets became the 15th to win their first such appearance, and the 11th to do so on the road.

* There have been 18 second-round Game 7s since 2009, with at least one played every year during that span. The road team holds a 10-8 advantage in those contests.

The Atlantic Division champion faces the No. 1 seed from the Metropolitan Division when the Lightning host the Capitals in Game 1 of the Eastern Conference Final at AMALIE Arena in Tampa.

* These two teams have met twice prior in the postseason with Tampa Bay holding a 2-0 series edge. The Lightning defeated the Capitals in six games to open the 2003 Stanley Cup Playoffs and swept Washington in the 2011 Conference Semifinals. Steven Stamkos and Victor Hedman are the only Lightning players remaining from that series in 2011, while Capitals skaters Alex Ovechkin, John Carlson and Nicklas Backstrom also took part in the series.

* Washington is in the Conference Finals for the first time in 20 years and just the third time in franchise history (also 1990 and 1998). Among teams that have ended such droughts, they are the only one to go 18 seasons between appearances in the Conference Finals. The Bruins and Kings ended 17-season droughts in 2011 and 2012, respectively, en route to winning the Stanley Cup.

* Both clubs are led offensively by Russian star forwards: Alex Ovechkin tops the Capitals with 8-7—15 in the 2018 Stanley Cup Playoffs and scored a League-high 49 goals during the regular season to win his seventh career Maurice “Rocket” Richard Trophy; Nikita Kucherov paces all Lightning skaters with 6-6—12 this postseason and ranked third in the NHL during the regular season with 39-61—100 to become the third player in franchise history to reach the 100-point milestone.