SCHEDULE ANNOUNCED FOR CONFERENCE FINALS
Dates and times for the Eastern and Western Conference Final were announced Tuesday, with final matchups dependent on the outcome of tomorrow’s Game 7 between the Predators and Jets.

* The Eastern Conference Final between the Lightning and Capitals will begin Friday in Tampa, regardless of which team advances in the West (NBCSN, TVA Sports^). 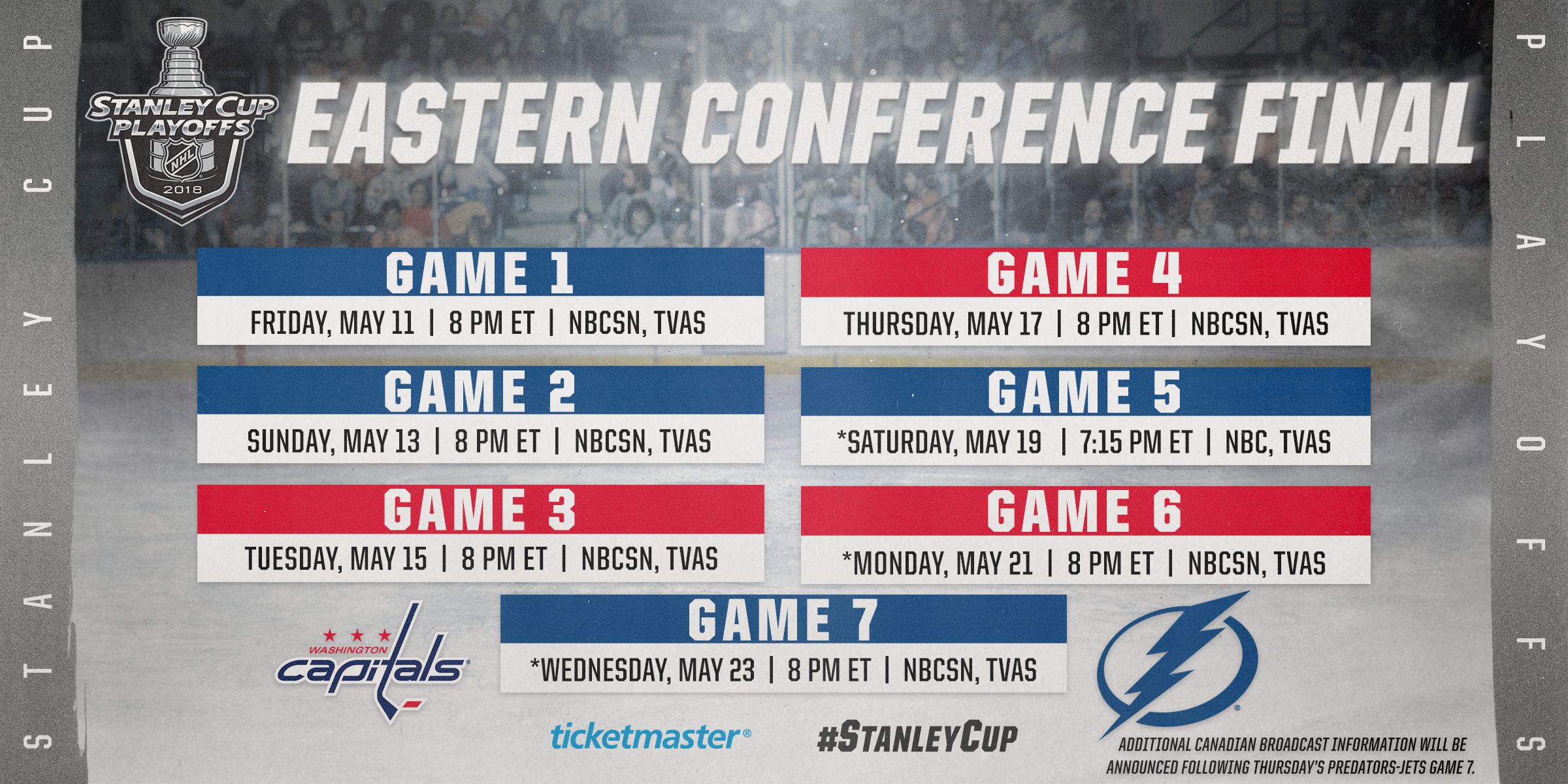 * The Western Conference Final will feature the Golden Knights and either the Predators or Jets, beginning with Game 1 Saturday in either Nashville or Winnipeg (NBC, TVA Sports^). 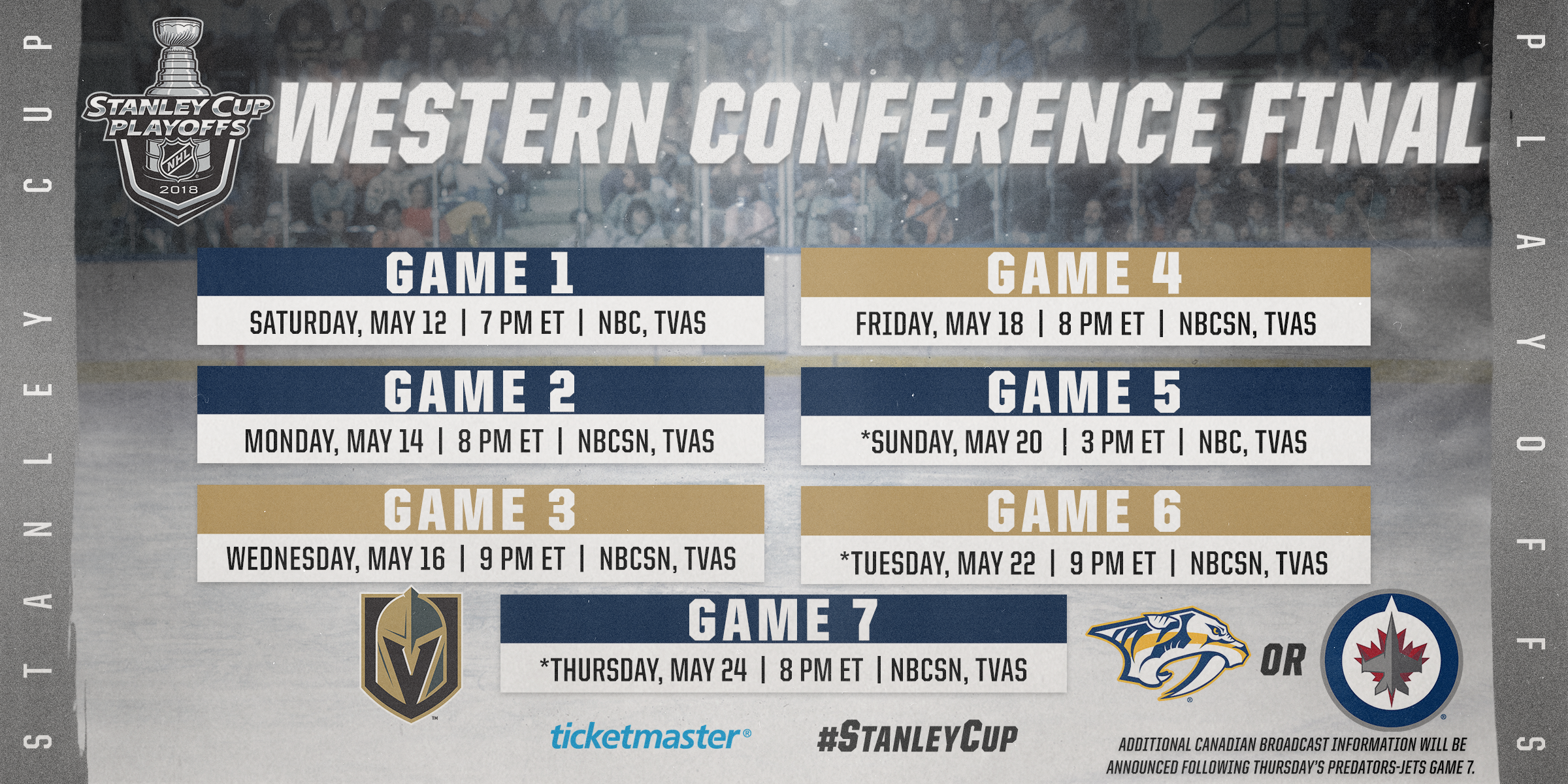 LOOKING AHEAD TO THE NEXT ROUND

With the Capitals ending the Penguins’ chance at a three-peat, a new Stanley Cup champion is guaranteed for the 18th time in the past 19 seasons. In fact, of the five teams still in contention only the Lightning have a Cup to their credit (2004). This will mark the first time in NHL history that the final four will have combined for one or fewer Stanley Cup wins.

* The improbable run of the Golden Knights continues as they aim to become the first team in NHL history to win three playoff series in their inaugural season. Only two NHL clubs have won three series during their first postseason appearance: the Montreal Maroons (2nd season) and Florida Panthers (3rd season). The Maroons won three series – two total-goals and one best-of-five – to win the Stanley Cup in 1926, while Florida won three best-of-seven matchups to reach the Final in 1996. The Panthers remain the only club making its first postseason appearance to reach the Stanley Cup Final in the four-round era (since 1975). Click here for a season-over-season stats comparison for Golden Knights players.

* The Lightning will host Game 1 of the Eastern Conference Final after finishing first in the conference during the regular season. Tampa Bay has gone to Game 7 in each of its previous four trips to the Conference Finals, winning in 2004 and 2015 (vs. PHI and NYR, respectively) and losing in 2011 and 2016 (vs. BOS and PIT, respectively).

* For the first time since 1998, the Capitals are four wins away from the Stanley Cup Final as they pursue the first championship in franchise history. If Washington advances, it will mark the second time since 2000 that two teams who have never won the Cup go head-to-head in the Final (since all three remaining teams in the West are chasing their first title). The only such instance came in 2007 when the Ducks defeated the Senators in five games.


LOOKING AHEAD TO GAME 7
After combining for 40 goals through six games, the Predators and Jets will square off in a decisive Game 7 on Thursday in Nashville. This marks the 10th consecutive year that the Second Round of the Stanley Cup Playoffs will conclude with a seventh and deciding game.