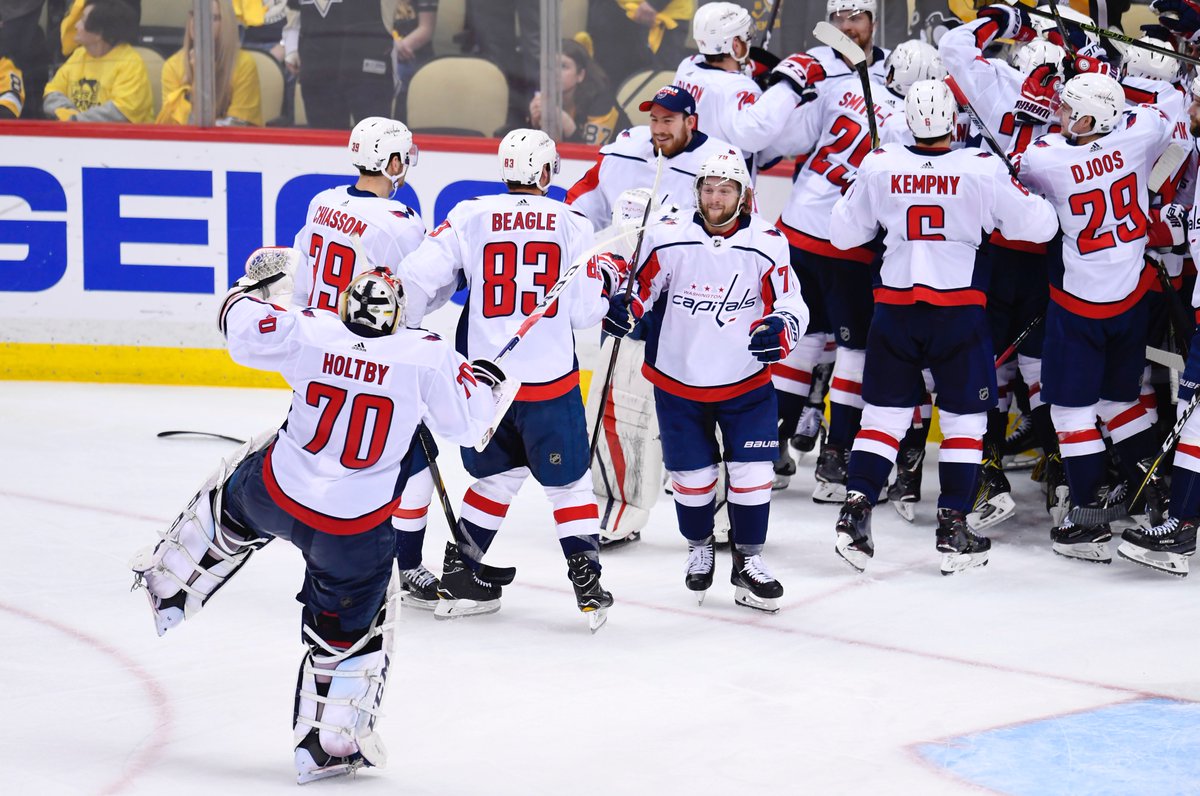 Alex Ovechkin set up Evgeny Kuznetsov’s series-clinching goal at 5:27 of overtime to eliminate the two-time defending Stanley Cup champion Penguins and propel the Capitals into the Conference Finals for the first time since 1998 (4-2 W vs. BUF). Washington’s victory guarantees that there will be a new Stanley Cup champion for the 18th time in the past 19 seasons.

* The Capitals, who also reached the Eastern Conference Final in 1990 (4-0 L vs. BOS), improved to 2-9 in 11 all-time playoff series against the Penguins. Their only other victory came in the 1994 Conference Quarterfinals (4-2 W).

* The Capitals reached the Conference Finals for the first time since 1998 when they made their first appearance in the Stanley Cup Final. Among teams who have ended such droughts, they are the only one to go 18 seasons between appearances in the Conference Finals. The Bruins and Kings ended 17-season droughts in 2011 and 2012, respectively, en route to winning the Stanley Cup.

* Ovechkin, who found the score sheet in five of six games (3-4—7) and factored on three game-winning goals in the series (1-2—3), has collected 15-18—33 in 26 career postseason games vs. PIT, the most playoff points and assists (tied) against the club by any player in franchise history.

* Kuznetsov, who notched 1-2—3 to rally his club to a crucial Game 5 victory on Saturday, became the seventh player in Capitals history to score a series-clinching goal in overtime. His was the sixth such goal on the road.

* Washington and Tampa Bay will meet in the postseason for the third time and first since the 2011 Conference Semifinals (4-0 TBL). The clubs first met during the 2003 Eastern Conference Quarterfinals, which saw the Lightning advance in Game 6 after Martin St. Louis scored 4:03 into triple overtime.

A CLOSER LOOK AT THE CAPITALS-PENGUINS RIVALRY
Monday marked the third one-goal game – and first overtime contest – of the Pittsburgh-Washington series. Overall, 32 of 68 all-time playoff contests between the Capitals and Penguins have been decided by a one-goal margin (47%), including 14 in overtime and five of 11 series-clinching games.

* Of the 14 head-to-head overtime contests in the postseason, four have come in potential series-clinching games. Washington won Game 6 of the 2009 Conference Semifinals (David Steckel) to extend the series, while Pittsburgh won the other two such contests to advance: Game 6 of the 2001 Conference Quarterfinals (Martin Straka) and Game 7 of the 2016 Second Round (Nick Bonino).

* The Capitals played their 67th playoff overtime game to surpass the Avalanche (37-29) and Blues (35-31) for sole possession of ninth all-time and third-most by any non-Original Six club. Washington has played 36 playoff contests since the start of the 2008 Stanley Cup Playoffs, including a League-high five this year (3-2).

Viktor Arvidsson and Filip Forsberg each collected two goals and an assist – with Forsberg going between his legs for a 3-0 lead in the third period – and Pekka Rinne turned aside all 34 shots he faced as the Predators forced a Game 7 against the Jets. The final game of the Second Round will be played Thursday at 8 p.m. ET in Nashville (CBC, SN, TVAS, NBSCN).

Forsberg, who established a franchise record for points this postseason (22-19—41), tallied multiple goals in a playoff game for the fourth time in his career. He and Arvidsson became the second set of Predators teammates to each score two or more goals in a game with the club facing elimination.

* After allowing six goals in 46:23 of playing time in Game 5, Rinne rebounded to post his second shutout of the 2018 Stanley Cup Playoffs (and first by a Predators goalie in an elimination game). Monday marked the second time this series that Rinne rebounded from a defeat in which he surrendered at least five goals – he allowed five goals in Game 3 before backing Nashville to a 2-1 victory in Game 4.

LOOKING AHEAD TO GAME 7

For the 10th consecutive year, the second round of the Stanley Cup Playoffs will conclude with a Game 7. The eventual Stanley Cup champion has won at least one Game 7 in each of the past five years.

* The Predators will host a seventh and deciding game on home ice for the first time, with each of their other two such contests coming on the road in 2016 –  they won 2-1 in Anaheim in the First Round and lost 5-0 in San Jose in the Second Round.

* The Jets are set to play in their first Game 7 in franchise history, becoming the 29th active NHL franchise to do so (and first to make their debut since NSH). Fourteen clubs have won their first such appearance, including 10 road victories.