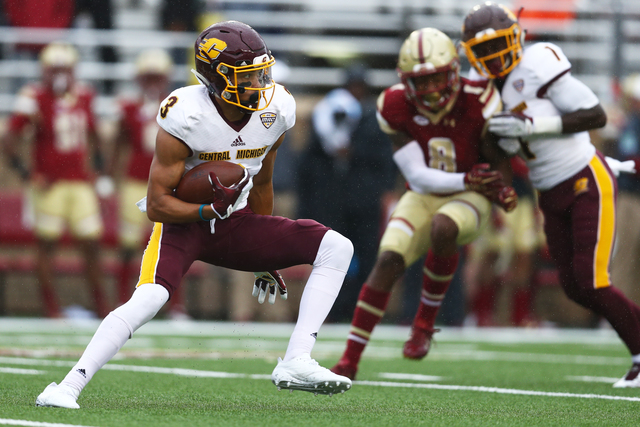 Central Michigan receiver Mark Chapman is the number one draft pick in the CFL after being taken by the Hamilton Tiger-Cats.  The six-foot, 180-pound Chapman was the leading receiver last season at Central Michigan University with 59 catches for 875 yards and five TDs. Over four seasons at the school. Chapman had 147 receptions for 2,035 yards and 10 TDs.   Seven picks in the first round were offensive lineman including UBC's Dakoda Shepley.  He went 5th overall.  Other Rider picks were LB Micah Teitz from Calgary with the 14th pick, DL Mathieu Breton from Bishops with the 36th pick, DL Tresor Buana-Mafuta from St. Mary's with the 45th pick and OL Christopher Smith from York with the 63rd pick.

Regina Rams running back Atlee Simon was taken by Calgary with the 50th overall pick,

--The Edmonton Oil Kings made Dylan Guenther the first pick in the WHL Bantam Draft.  The Edmonton-born Guenther had 103 points in 30 games with his team last season.  The first Saskatchewan player taken was Nolan Allan of Davidson. He went 3rd to Prince Albert with Cole Sillinger of Regina going to Medicine Hat with pick 11. In all, there were 42 players taken from Saskatchewan.

--The Jets and Predators are tied at 2.  Nashville beat Winnipeg 2-1 to even things up with Game 5 back in Music City. The Penguins evened things up with Washington with a 3-1 win.

-- Bill Torrey, the general manager of the New York Islanders when they won four consecutive Stanley Cups in the 1980s and eventually became the first president of the Florida Panthers, has died.
Torrey died at his home in South Florida on Wednesday night.  He was 83.

--Atlanta Falcons quarterback Matt Ryan has a new contract.  Ryan signed a 5 year contract extension worth 150 million dollars with 100 million of that being guaranteed.