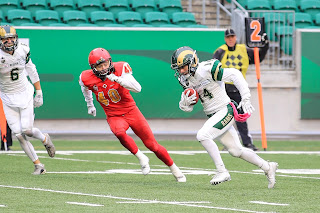 While CFL teams are making final preparations for Thursday's draft,  they are also looking ahead to the USports East-West game featuring the top draft-eligible players for the 2019 draft.

The rosters for that game in Laval, Quebec on May 12 were announced today and three members of the U of R Rams are on it.

The three are defensive back Cord Delinte, and receivers Kyle Moortgat and Ryan Schienbein.

Delinte, a defensive back, completed his second season with the Rams last fall after a three-season junior career with the Okanagan Sun. He took over as the team’s starting safety midway through the 2016 campaign, but has shown his versatility with playing time at both will linebacker and halfback over the past two years. In 14 career Canada West games, Delinte has piled up 42½ tackles, 4½ tackles for loss, one interception and six pass breakups. He also had a 47-yard interception return in a 2016 postseason game.

After a redshirt year in 2014 and spending the majority of the 2015 and 2016 seasons as a backup receiver, Moortgat enjoyed a breakout season in 2017. Seeing time on the field at both wide receiver and slotback, Moortgat caught 37 passes for 408 yards and two touchdowns in eight conference games last year.

Schienbein (pictured) has been a major contributor for the Rams since graduating from Campbell Collegiate in 2015. After contributing mostly as a return specialist in his first season, he was named a Canada West all-star in 2016 after earning a starting role at slotback and finishing second in the conference in all three major receiving categories. With two seasons of U SPORTS eligibility still remaining, Schienbein has collected 97 catches, 1304 receiving yards, and 11 touchdowns in his Rams career.
at 5/01/2018