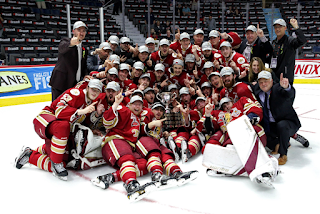 
--The Acadie-Bathurst Titan spoiled the party. Did they ever!  It was like the cops showing up to break up things before everyone came to the house.  Right from the opening puck drop, the Quebec champs seized control of the Mastercard Memorial Cup final not allowing the Pats to do anything.  If it wasn't for Max Paddock, one can only imagine how bad it might have been as the Titan dominated Regina for the first half of the game.  At one point, they were outshooting them 16-0 in the 2nd and 28-5 for the game.  The sold-out crowd kept waiting to explode and had the Pats tied it, one wonders what might have happened.  It didn't meaning Pats fans had to for a second year in a row watch a different team skate around with the hardware.  Chances are they won't get the opportunity to see that for a 3rd year as the likes of Steel, Mahura, Hebig, Bradley and Hajek are done.  While guys like Max Paddock, Nick Henry, Jake Leschyshyn and Robbie Holmes will be back, the run we saw this team take for the last two years won't be happening

--What a great week of hockey.  The Broncos, Pats, Bulldogs and Titan treated fans to what some are saying has been the most entertaining Memorial Cup in years.  Those are from ones who have followed the tournament along.  It was a treat to watch.

--Is it just me or was it nice to see the Pats not get moved to the backseat as they were the focus of many on the same day the Riders played. Has that ever happened before?

-- Are we ready for the Stanley Cup? As Sportsnet's Ian Mendes said last week, it is a final which will feature a morally bankrupt city that is built on corruption, greed & deceit against Las Vegas. The Knights have been the story of the sports world and they are four victories away from completing something that few thought could happen at this time a year ago.  I'm taking Washington ( although I did take SJ and Winnipeg) in earlier rounds.  The Saskatchewan connection of Trotz, Stephenson, Holtby is what I'm going with.  At the end of the day, I could care less about who is hoisting the Cup as it isn't my team, but I'll take the Capitals to do it in 6.

--I think it is safe to say Marc-Andre Fleury is the Conn Smythe favourite at this time. If the Capitals do hoist the Cup who have ya got.  I think it could still be open as to who gets that, but Alexandre Ovechkin may be the favourite.

--I wonder what NHL GM's think of Evander Kane getting seven million a year for the next 7 years in San Jose.  I bet Kevin Cheveldayoff is happy seeing he has all of those young forwards he needs to sign to new deals at some point along with guys like Jacob Trouba and Josh Morrissey.

--The Riders lost 35-12. Who cares? Three quarterbacks played that if all goes well won't hit the field this season. Over 20 regulars were left at home.  If the Riders lose to Toronto in the season opener, you can start asking questions.  I'm sure Chris Jones didn't like the way things went down as he doesn't like to lose at checkers, but pre-season games are evaluation games.  They don't matter when all is said and done.

--Lebron James is in the NBA finals again. Did anyone really think that wasn't going to happen? I am guessing Golden State joins them there tonight.


No doubt as to who the better team was. You could see that 10 minutes into the first period.

Guessing young Mr. Paddock has seen his draft stock soar. What a performance!

Was it Legion who hit the post in the 2nd period? If that goes in, its a different hockey game.

Great week of hockey. Its the best we will see around here for quite a bit unless we can somehow get the World Juniors or world championship here in the next 10 years.

Well at least there is still one Sask. team around, Go Rush Go!