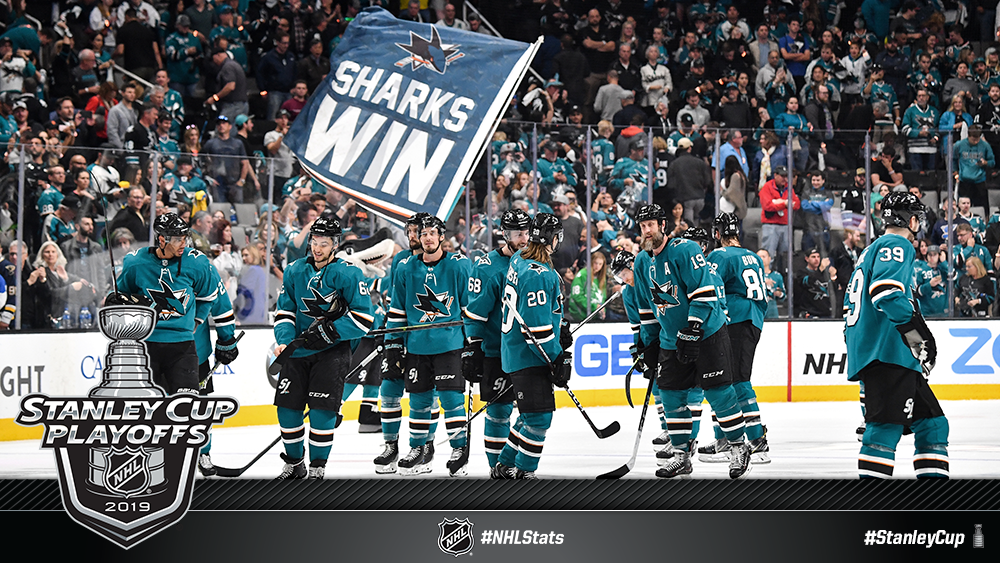 * The Sharks opened the Western Conference Final in winning fashion and took a 1-0 series lead for the third time this postseason.

* The Hurricanes look to pull even in the Eastern Conference Final when they take on the Bruins in Game 2 this afternoon.

Logan Couture and Timo Meier each collected 2-1—3 to help the Sharks open the Western Conference Final with a win. San Jose improved to 7-2 at SAP Center in the 2019 Stanley Cup Playoffs and moved within one home win of matching its franchise record for most in a postseason (8-4 in 2016).

* Couture’s 11 goals are the second-most ever by a Sharks player in a playoff year, one more than he scored in 2016 and three shy of the franchise record set by captain Joe Pavelski in 2016 (14-9—23 in 24 GP). Couture became the sixth active NHL player to reach the 10-goal mark in multiple postseasons. 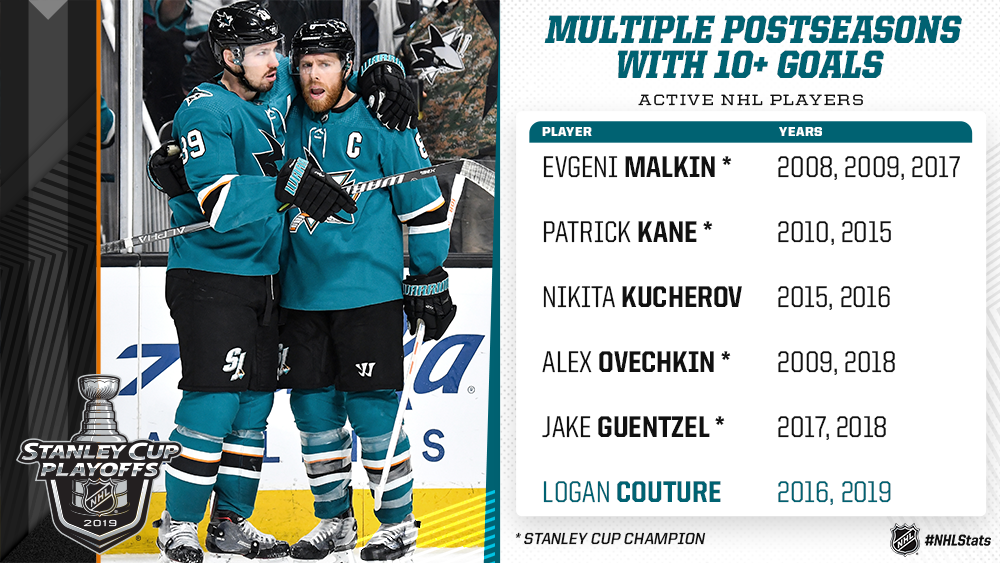 * Meier recorded his first career multi-goal game in the Stanley Cup Playoffs – scoring the winner in highlight-reel fashion – and posted his second three-point outing of the postseason. Meier led the Rouyn-Noranda Huskies to a QMJHL championship in 2015-16 before being named to the Memorial Cup All-Star Team. One of 13 Swiss players to skate in 2018-19, Meier helped his country win a silver medal at the 2018 IIHF World Championship.

* Joe Pavelski (1-1—2) scored his 48th career goal in the Stanley Cup Playoffs to pass Chris Drury (47) for sole possession of sixth place on the NHL’s all-time list among players of U.S. nationality.

* Joe Thornton (0-1—1) recorded the 1,608th point of his NHL career (regular season and playoffs combined) and tied Bryan Trottier for the 16th-highest such total in League history.

Sharks teammates and former James Norris Memorial Trophy winners Brent Burns (5-10—15) and Erik Karlsson (0-13—13) each collected an assist on Saturday and have combined for 28 points through 15 games this postseason.

* Burns and Karlsson became the first defensive tandem to combine for 28 or more points through the first 15 team games in a postseason since 1995 when Detroit’s Paul Coffey (5-12—17 in 15 GP) and Nicklas Lidstrom (4-11—15 in 15 GP) did so. Coffey and Lidstrom finished that postseason with a combined 34 points as the Red Wings reached the Stanley Cup Final.

* Did You Know? Burns and Karlsson were the ninth pair of defensemen to skate as teammates after winning the James Norris Memorial Trophy. Burns and Karlsson can become the fifth different set of Norris Trophy-winning teammates to capture at least one Stanley Cup; they would join Chris Chelios and Nicklas Lidstrom in 2002 and 2008 (w/ DET), Doug Harvey and Tom Johnson in 1960 (w/ MTL), Rob Blake and Ray Bourque in 2001 (w/ COL) as well as Scott Niedermayer and Chris Pronger in 2007 (w/ ANA).

The Hurricanes and Bruins are set to square off in Game 2 of the Eastern Conference Final at TD Garden Sunday, after Boston stormed back in the third period to claim the series opener Thursday.

* There have been 71 instances in NHL history of a best-of-seven Conference Finals/Semifinals being tied 1-1, with the winner of Game 3 owning an all-time series record of 54-17 (76.1%).

* The three forwards who won a Cup with Boston in 2011 - David Krejci, Patrice Bergeron and Brad Marchand - each found the score sheet in Game 1 to boost their career totals in the Conference Finals. 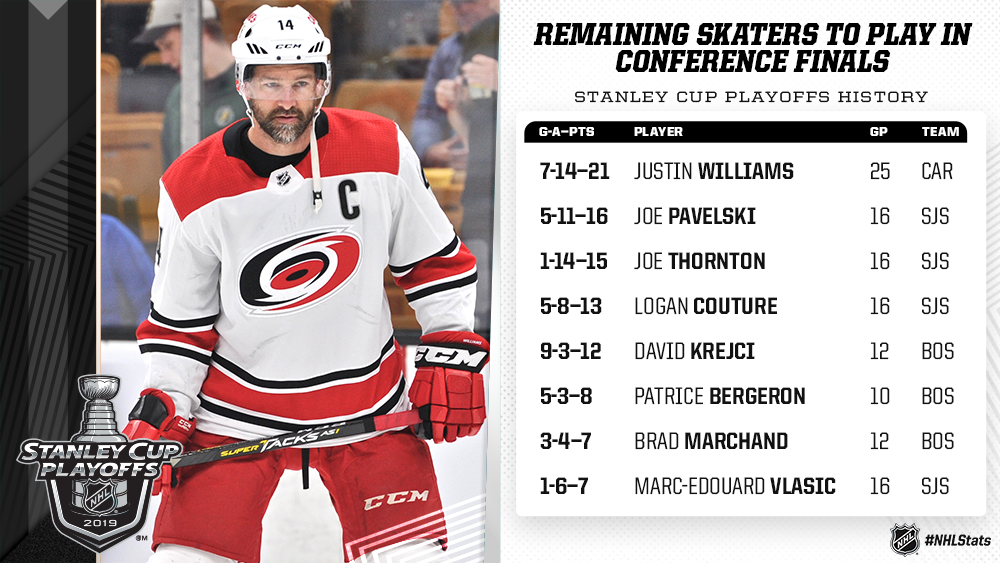