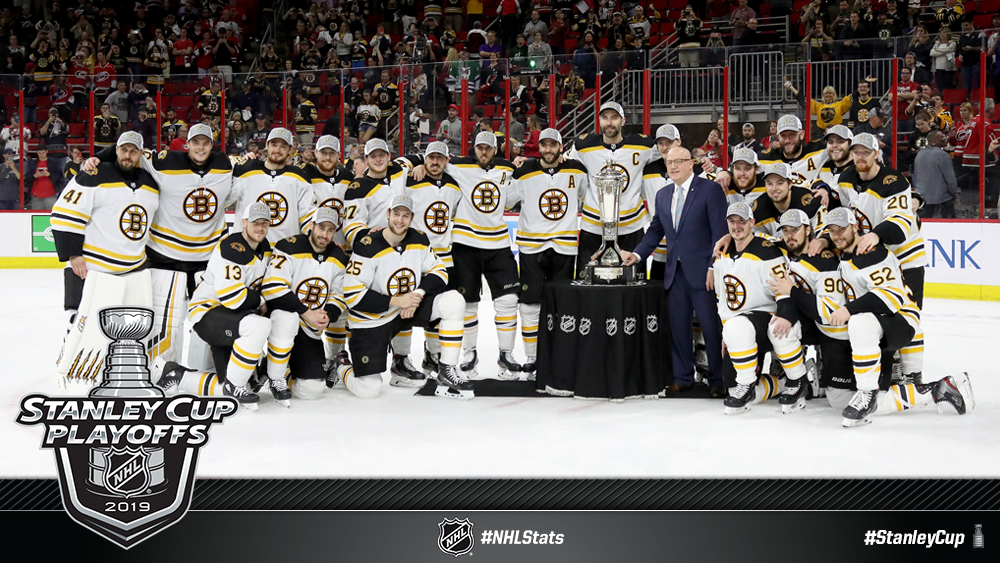 * “Perfection Line” of Patrice Bergeron, David Pastrnak and Brad Marchand combined for all four goals as the Bruins swept the Hurricanes to advance to the Stanley Cup Final.

* Tuukka Rask blanked Carolina to record his second clinching shutout in as many series and the third of his NHL career overall.

* The Sharks and Blues face off in a pivotal Game 4 at Enterprise Center in St. Louis.

* The Bruins became the fourth franchise in NHL history to reach the Stanley Cup Final 20 or more times, joining the Canadiens (32), Red Wings (24) and Maple Leafs (21). Ten of Boston’s 20 all-time Stanley Cup Final appearances have occurred in the NHL’s expansion era (since 1967-68), the second-most in that span behind only Montreal (11). 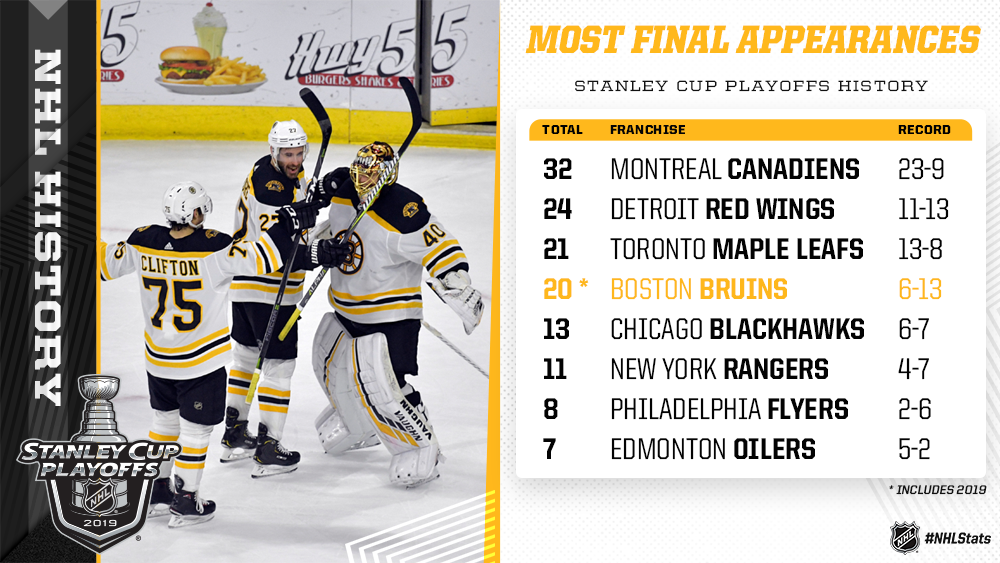 * Boston swept a best-of-seven Stanley Cup Playoffs series for the 15th time in franchise history and sixth time in the Conference Finals/Semifinals (also 1970 vs. CHI, 1972 vs. STL, 1977 vs. PHI, 1990 vs. WSH and 2013 vs. PIT). The four-game triumph over the Penguins in the 2013 Conference Finals was also their last sweep overall.

* The Bruins advanced to the Stanley Cup Final with a 7-0 record in their last seven games, marking the third-longest single-postseason win streak in franchise history behind runs of 10-0 in 1970 and 9-0 in 1972.

* Despite missing his first postseason game since 2011, Bruins captain Zdeno Chara suited up to hit the ice with his teammates for the presentation of the Prince of Wales Trophy.

RASK RECORDS SECOND CLINCHING SHUTOUT IN AS MANY SERIES

* Rask recorded his seventh career shutout in the Stanley Cup Playoffs overall and passed Miikka Kiprusoff (6) for the most in NHL history by a Finnish-born goaltender.

LINE OF BERGERON, PASTRNAK AND MARCHAND COMBINE FOR ALL FOUR GOALS

* Patrice Bergeron scored his League-leading sixth power-play goal of the 2019 Stanley Cup Playoffs, the second-most in a postseason by a Bruins player behind only Cam Neely in 1991 (9) – who shares the NHL record for most in playoff year (w/ Mike Bossy in 1981). Boston leads the League with 17 power-play goals in the 2019 Stanley Cup Playoffs, the fourth-highest total in a postseason in franchise history.

* David Pastrnak scored his 15th career goal in the Stanley Cup Playoffs (15-24—39 in 35 GP), the second-most by a Bruins player before turning 23 behind only Barry Pederson (21-29—50 in 28 GP). Pastrnak has scored 147 career NHL goals (regular season and playoffs combined), the highest such total by a Bruins player before celebrating their 23rd birthday – six more than Pederson (141).

After Erik Karlsson’s overtime winner gave San Jose a 2-1 series lead in the Western Conference Final on Wednesday, the Sharks and Blues will face off in a pivotal Game 4 at Enterprise Center in St. Louis on Friday. There have been 36 one-goal games in the 2019 Stanley Cup Playoffs, eight more than all of 2018 (28).

* The Sharks hold a 2-1 lead in a best-of-seven series for the 16th time in franchise history and own an all-time series record of 11-4 in the 15 previous instances. San Jose is up 2-1 in the Conference Finals for the second time in franchise history – they also held a 2-1 advantage against St. Louis in the 2016 Western Conference Final before advancing to the Stanley Cup Final for the first time.

* In his second career appearance in the Conference Finals, Karlsson (2-13—15 in 17 GP) scored his first two goals of the 2019 Stanley Cup Playoffs in Game 3, including the overtime winner. During Ottawa’s run to the Conference Finals in 2017, the two-time Norris Trophy winner collected 2-16—18 in 19 postseason games and 0-5—5 in the Eastern Conference Final before his club bowed out to the Penguins in seven contests.

* A pair of Blues players can establish franchise records in Game 4. Goaltender Jordan Binnington (9-7) sits one win shy of setting the Blues record in a single postseason, while captain Alex Pietrangelo (2-10—12 in 16 GP) needs one point for the most in a playoff year by a St. Louis defenseman.

* Like Karlsson, David Perron also scored twice in Game 3 and is tied for fourth on the club with 5-5—10 in 16 games this postseason. He is making his second consecutive appearance in the Western Conference Final after posting 1-8—9 in 15 games during the Golden Knights’ historic run to the Stanley Cup Final in 2018.