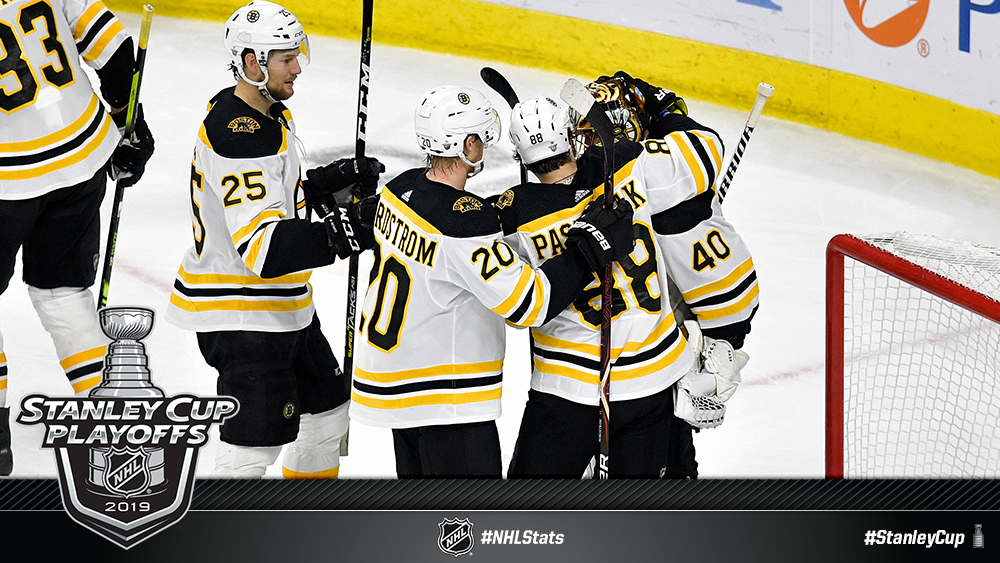 * Tuukka Rask made 20 saves in the first period (35 overall) to extend his win streak to six games – the longest by a Bruins goalie in 31 years – and join a short list of top road playoff performers.

* After pulling even in San Jose, the Blues return home for Game 3 against the Sharks.

Tuukka Rask made 35 saves – stopping all 20 shots he faced in the first period (including 11 in the opening 6:30) – as the Bruins handed the Hurricanes their first home loss of the 2019 playoffs and took a 3-0 series lead. Boston moved within one win of reaching the Stanley Cup Final for the 20th time in franchise history and third time in the past eight years (2011 and 2013).

* The Bruins own a 3-0 lead in a best-of-seven series for the 21st time in franchise history, holding an all-time series record of 19-1 in the 20 previous instances. Boston’s lone loss came to Philadelphia in the 2010 Conference Semifinals.

* The Bruins are up 3-0 in a Conference Finals/Semifinals for the eighth time in franchise history and own an all-time series record of 7-0 in the seven previous instances, including five sweeps.

* Boston improved to 6-0 in its last six games, marking its longest playoff win streak in 41 years and tied for the third-longest postseason win streak in franchise history.

* After posting a 49-24-9 record in the regular season, Boston improved to 11-5 in the playoffs. The Bruins earned 60 or more combined wins in a campaign for the eighth time.

* Rask extended his win streak to six games, the longest by a Bruins goaltender in 31 years – Reggie Lemelin had an equal run to help Boston reach the 1988 Stanley Cup Final. Only one goaltender in franchise history has recorded a longer win streak in a postseason: Gerry Cheevers won 10 straight games in 1970 to backstop Boston to its fourth Stanley Cup.

* Rask became the third goaltender in franchise history to record a personal win streak of at least six games in both the regular season and playoffs during the same year; he joined Frank Brimsek in 1940-41 and Eddie Johnston in 1971-72.

* Rask owns a career road goals-against average of 2.02 in the Stanley Cup Playoffs (37 GP), the third-lowest in NHL history among goaltenders to appear in at least 25 postseason games as a visitor. Neither goaltender ahead of him on that list has played an NHL game in the last 67 years – George Hainsworth (1.86 GAA) and Turk Broda (1.87 GAA) made their final playoff appearances in 1936 and 1952, respectively.

* Wagner scored his second goal of the Conference Finals after being held off the score sheet in the Bruins’ opening two rounds of the 2019 Stanley Cup Playoffs. Signed as a free agent in July 2018, Wagner (Walpole, Mass.) is one of three Massachusetts-born players to play for Boston this postseason – with each of them scoring in the Conference Finals (also Charlie Coyle and Matt Grzelcyk).

* Current Hurricanes captain Justin Williams was part of the last group to do so, collecting each of his six points in the 2014 First Round in Games 4-7 for the Kings as he helped them rally past the Sharks en route to winning both the Stanley Cup and Conn Smythe Trophy.

GATEWAY TO THE WEST WELCOMES BLUES, SHARKS FOR GAME 3

After earning a split in San Jose, the Blues return home to Enterprise Center in St. Louis for Game 3 against the Sharks. The clubs also were tied 1-1 in the 2016 Western Conference Final, with San Jose winning Game 3 at home – via two goals from Tomas Hertl and a 22-save shutout by Martin Jones – en route to a six-game series victory.

* ICYMI: Laila Anderson, a young Blues fan who found a bone marrow match in December thanks in part to the organization, will be headed to her first playoff game tonight. Click here to learn more about Laila and watch as she gets the news about going to Game 3.

* Sharks forward Logan Couture leads the League with 13 goals and 19 points in the 2019 Stanley Cup Playoffs (13-6—19 in 16 GP) and has scored twice in both games of the Western Conference Final. He is one goal shy of matching the franchise record for most in a postseason, a mark set by teammate Joe Pavelski in 2016 (14-9—23 in 24 GP).

* Couture is one goal/assist shy of reaching the 20-point mark in a postseason for the second time in his NHL career and first since 2016, when he established a franchise record for most in a playoff year with 30 (10-20—30 in 24 GP). He can become the first player in Sharks history to reach the 20-point mark in multiple postseasons – a feat teammate Brent Burns (5-10—15 in 16 GP) is also within striking distance of accomplishing.

* Couture can become the second player in franchise history to score multiple goals in three consecutive team games within a playoff year; he would join Pavelski, who did so during the 2010 Stanley Cup Playoffs (6-3—9 in 3 GP).

* Blues defenseman Robert Bortuzzo scored the winner in Game 2 – his first career goal in the Stanley Cup Playoffs (1-2—3 in 31 GP). Defensemen have combined for seven of St. Louis’ 41 goals in the 2019 Stanley Cup Playoffs (17.1%), the highest such percentage among remaining teams. Jordan Binnington (9-6) sits one win shy of setting the franchise record for a single postseason, while captain Alex Pietrangelo (2-10—12) needs one point for the most in a playoff year by a Blues defenseman.