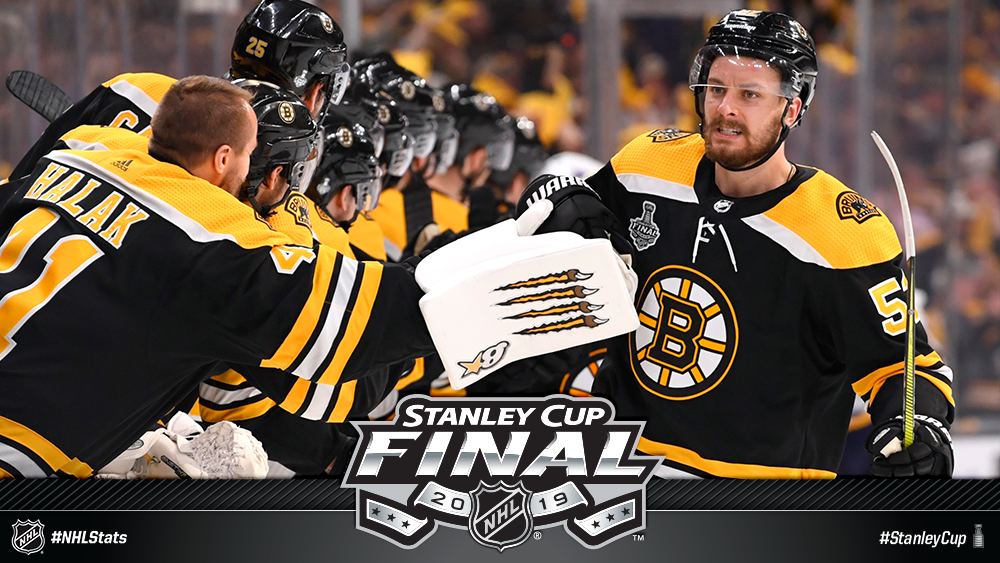 * The Bruins opened the Stanley Cup Final with a multi-goal comeback victory and extended their win streak to eight games.

* Boston rallied from a multi-goal deficit to win a game in the Stanley Cup Playoffs for the 28th time in franchise history and first time in the Final.

* The recent trend of unpredictable Game 1s in the Stanley Cup Final continued.

Facing a 2-0 deficit on home ice, the Bruins scored four unanswered goals - including the winner by Sean Kuraly (1-1—2) at 5:21 of the third period - to capture Game 1 of the 2019 Stanley Cup Final and extend their winning streak to eight games overall. Boston became the first team to string together eight consecutive playoff victories since Los Angeles in 2012 (also 8-0).

* The Bruins’ winning streak stands as the franchise’s third-longest in a playoff year, behind a 10-0 stretch in 1970 and 9-0 streak in 1972 (both years they won the Stanley Cup). Boston has outscored opponents 32-11 during its current streak, which dates to Game 4 of the Second Round versus Columbus and includes a four-game sweep of Carolina in the Eastern Conference Final.

* Following a regular season in which there were a record 138 multi-goal comeback wins, Boston completed the sixth such victory during the 2019 Stanley Cup Playoffs.

* Kuraly also was the hero in Boston’s last multi-goal comeback win in the postseason (regardless of series). The Dublin, Ohio, native scored twice in Game 5 of the 2017 First Round at OTT - his 11th career NHL game (third in the playoffs) - including the tying goal and double-overtime winner to help Boston extend the series.

* Kuraly, who has developed a knack for big moments in his NHL career, also tallied 1-1—2 in Game 7 of the 2019 First Round to help eliminate Toronto. Including the regular season, nine of his 21 career NHL goals have either tied the game (3) or stood as the winner (6) - with one of those decisive tallies coming in the 2019 Bridgestone NHL Winter Classic at Notre Dame.

The series opener between the Bruins and Blues continued a trend of unpredictable Game 1s in the Stanley Cup Final over the past decade:

2017: The Predators erased a 3-0 deficit, but Jake Guentzel scored the go-ahead goal with 3:17 remaining in regulation to lift the Penguins to a win.

2016: The Sharks overcame a 2-0 deficit, but Nick Bonino registered the tiebreaking goal with 2:33 left in the third period to give the Penguins a victory.

2015: Trailing 1-0 with less than seven minutes remaining in regulation, Teuvo Teravainen and Antoine Vermette scored 1:58 apart to lift the Blackhawks to a win (at TBL).

2014: Down 2-0 late in the opening period, Justin Williams completed the Kings’ comeback with his first career playoff overtime goal at 4:36 of the extra session (vs. NYR).

2013: Behind 3-1 early in the third period, the Blackhawks scored three unanswered goals - including the winner by Andrew Shaw at 52:08 of overtime - to capture the fifth-longest game in Stanley Cup Final history (vs. BOS).

2011: Raffi Torres recorded the lone goal at 19:41 of the third period – the latest winning goal in regulation of a Stanley Cup Final game since 1992 – to give the Canucks a victory (vs. BOS).

2010: The Blackhawks and Flyers combined for 11 goals - including five in both the first and second periods - as Chicago won the highest-scoring Stanley Cup Final game since 1992. 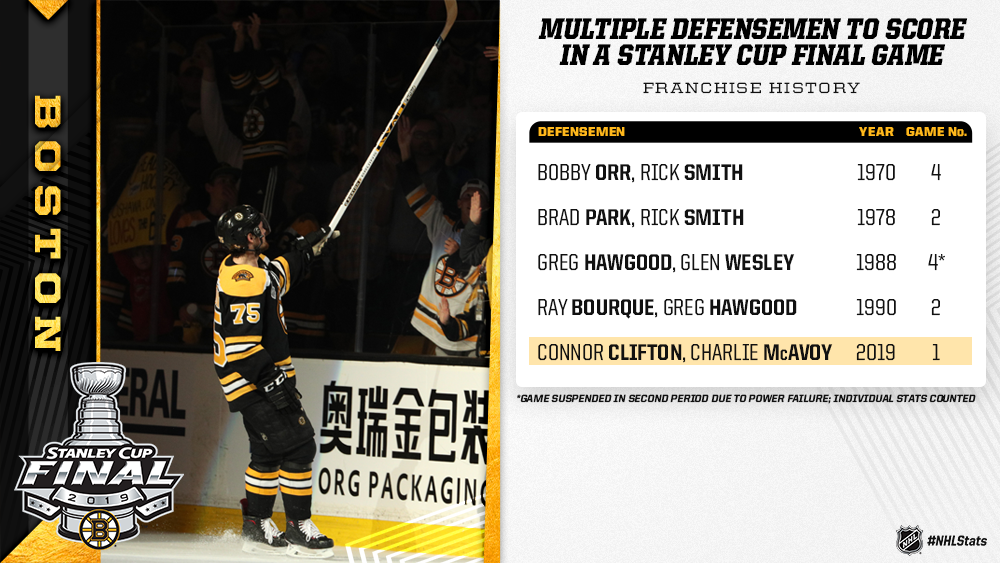 * Bruins defensemen Connor Clifton and Charlie McAvoy each scored in the second period to turn a 2-0 deficit into a tie game. It marked the fifth time in franchise history that multiple defensemen scored a goal in the same Stanley Cup Final game.

* Boston improved to 9-0 in nine all-time postseason contests against St. Louis. The Bruins became the third franchise in NHL history to win each of their first nine or more playoff games against one opponent - the Oilers did so against the original Jets (16-0; 1983-88) and the Canadiens also accomplished the feat against the Blues (12-0; 1968-77).

* Blues goaltender Jordan Binnington made 34 saves - including 16 in the second period - to match the second-highest single-game total by a rookie in the Final over the past 31 years. He equaled Cam Ward (34 saves in Game 1 of 2006 SCF) and fell three short of tying Matt Murray (37 saves in Game 2 of 2017 SCF).

* Overall, Boston owns an all-time series record of 37-17 when winning the opener in a best-of-seven series, while St. Louis is 6-24 when trailing 1-0. One of the Blues’ six series victories in that scenario came in the 2019 Western Conference Final.