* The Sharks won in overtime after scoring a tying goal with 1:01 left on the clock to win Game 3 and take a 2-1 series lead in the Western Conference Final.


* The Bruins look to close out the Hurricanes and advance to the Stanley Cup Final for the 20th time in franchise history and third time in the last eight years (2011 and 2013).

St. Louis scored four second-period goals to overcome deficits of 2-0 and 3-1, but Logan Couture tied the game with 61 seconds remaining in regulation, setting the stage for the overtime winner by Erik Karlsson (2-0—2) to lift the Sharks to a 2-1 series lead.

* The Sharks own a 2-1 lead in a best-of-seven Stanley Cup Playoffs series for the 16th time in franchise history and own an all-time series record of 11-4 in the 15 previous instances. San Jose is up 2-1 in the Conference Finals for the second time in franchise history – they also led 2-1 in the 2016 Western Conference Final against St. Louis before reaching the Stanley Cup Final for the first time.

* San Jose became the first team to win a game in the Conference Finals after scoring a tying in the final 90 seconds of regulation since 2011, when Vancouver did so against them in Game 5.

* Karlsson scored his first two tallies of the 2019 Stanley Cup Playoffs (2-13—15 in 17 GP) to snap a 31-game goal drought dating to Dec. 29, 2018. Karlsson became the second defenseman in NHL history to record a multi-goal game in the Conference Finals/Semifinals which included the overtime winner, joining Montreal’s Georges Mantha who did so over 88 years ago in Game 3 of the 1931 Semifinals (2-0—2 vs. BOS). 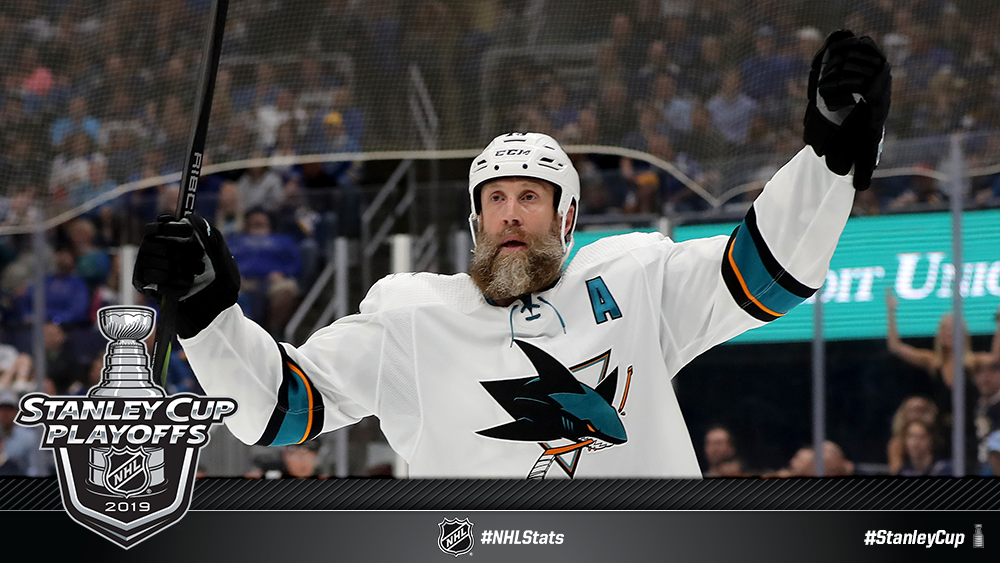 * Thornton also became the oldest player in franchise history to score multiple goals in any game (regular season or playoffs). The previous mark for the playoffs was set by Jeremy Roenick (38 years, 96 days) in Game 7 of the 2008 Conference Quarterfinals (2-2—4 vs. CGY).

* Overall, Thornton became the 11th different player in NHL history age 39 or older to record a multi-goal game in the Stanley Cup Playoffs and first since Boston’s Mark Recchi (43 years, 125 days) in Game 3 of the 2011 Stanley Cup Final (2-0—2 vs. VAN) – who tops the list as the oldest.

Captain Joe Pavelski (0-1—1), who was selected by the Sharks in the seventh round (205th overall) of the 2003 NHL Draft, recorded his 100th career playoff point. In doing so, he became the fourth player drafted in the seventh round or later to collect at least 100 postseason points.

Trailing 2-0, the Blues scored four goals in the second period to take the lead, marking the first time in 19 years that they scored at least that many goals in a playoff period. Their last such instance also came against San Jose, when they scored five times in the middle frame of a 6-2 victory to stave off elimination in Game 6 of the 2000 Conference Quarterfinals.

* Colton Parayko assisted on three straight goals to match the franchise record for points in a playoff period – a feat last achieved by Jochen Hecht in the game noted above.

The Bruins and Hurricanes are set to clash in Game 4 of the Eastern Conference Final at PNC Arena, with Boston needing a win to advance to the Stanley Cup Final for the 20th time in franchise history and third in the last eight years (2011 and 2013). Teams that take a 3-0 lead in a best-of-seven series own an all-time series record of 189-4 (97.9%) – including a 3-0 mark in 2019.

* With wins in each of their last six contests, the Bruins look to close out the Hurricanes and post their longest playoff winning streak in 47 years. Only three teams in the last 11 postseasons have had a win streak of seven or more games: the 2012 Kings, 2011 Lightning and 2010 Blackhawks.

* Tuukka Rask has backstopped Boston in each of those six victories, posting a 1.50 goals-against average, .956 save percentage and one shutout over that span. Rask trails only Gerry Cheevers - one of three goaltenders to win multiple Cups with the Bruins - for the longest postseason win streak in franchise history (10-0 in 1970).

* Rask is the second netminder in as many postseasons to post a save percentage of at least .956 over a span of six games, after Marc-Andre Fleury began the 2018 Stanley Cup Playoffs with a .967 save percentage with the Golden Knights.

* Hurricanes captain Justin Williams, who has posted 15-13—28 in 24 games with his team facing elimination (17-7), played a part in one of the four instances in NHL history of a team overcoming a 3-0 series deficit to win. He registered each of his six points in the 2014 First Round in Games 4-7 to propel the Kings past the Sharks, winning both the Stanley Cup and Conn Smythe Trophy.