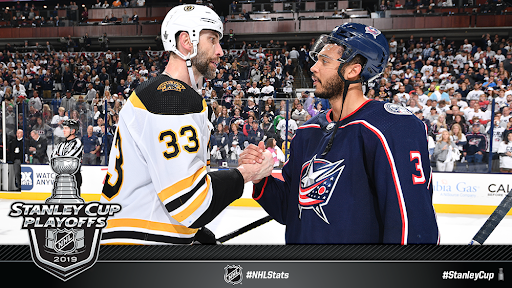 
* The Bruins blanked the Blue Jackets to advance to the Eastern Conference Final, where they will face the Hurricanes in the fifth postseason edition of the rivalry formerly known as the Battle of New England.

* The Sharks overcame three separate deficits, but the Avalanche scored in overtime to force Game 7 and improve to 3-0 past regulation in the 2019 Stanley Cup Playoffs.

* The Blues host the Stars at Enterprise Center in the fourth Game 7 of the 2019 Stanley Cup Playoffs with a berth in the Western Conference Final on the line.

Tuukka Rask turned aside all 39 shots he faced as the Bruins blanked the Blue Jackets to earn a series-clinching win in Game 6 and advance to the Eastern Conference Final. Boston has advanced to the Stanley Cup Final in each of their last two trips to the third round.

* The Bruins have earned at least one series-clinching win against 18 different NHL franchises. Only four clubs in NHL history have eliminated more NHL franchises – the Red Wings (22), Canadiens (21), Rangers (21) and Blackhawks (20).

* Rask recorded his sixth career shutout in the Stanley Cup Playoffs overall to tie Tiny Thompson and Thomas for the second-most in Bruins history, trailing only Cheevers (8). He also passed Pekka Rinne (5) and tied Miikka Kiprusoff for the most in NHL history by a Finnish-born goaltender.

* Rask’s 39 saves were tied for the fourth-most in a series-clinching shutout since 1955-56, when shots on goal became an official NHL statistic. His total was also one shy of matching the franchise record for most saves in a shutout at any point in a postseason since 1955-56 (40), a mark set by Cheevers in Game 1 of the 1969 Quarterfinals (10-0 W vs. TOR).

* Krejci scored his eighth career game-winning goal in the Stanley Cup Playoffs to pass Wayne Cashman and Bobby Orr (both w/ 7) and tie Middleton for third place on the franchise’s all-time list, behind only Cam Neely (11) and Phil Esposito (9). He scored his second career series-clinching goal (also Game 4 of 2009 CQF), trailing only Neely and Jean Ratelle (both w/ 3) for the most in Bruins history.

The Bruins will face the Hurricanes in the Eastern Conference Final, marking the fifth head-to-head postseason meeting between the franchises. Two of their series in the Stanley Cup Playoffs occurred prior to the 1997-98 season when the Hurricanes franchise played in Hartford – approximately 100 miles from Boston. The Bruins own a 3-1 edge in the four previous series, with each meeting requiring no fewer than six games:


* In the 1990 Division Semifinals, the Bruins rallied from 1-0 and 2-1 series deficits before earning a 3-1 win in Game 7 to eliminate the Whalers. Bruins President and Alternate Governor Cam Neely and future Whalers/Hurricanes defenseman Glen Wesley assisted on the series-clinching goal by Craig Janney – a native of Hartford.

* In the 1991 Division Semifinals, Neely led all Bruins players with five goals (5-3—8 in 6 GP) as Boston skated to a six-game triumph over Hartford.

* In the 1999 Conference Quarterfinals, Anson Carter scored the double-overtime winner in Game 5 as Boston took a 3-2 series lead over Carolina before Bruins goaltender Byron Dafoe earned a series-clinching shutout in Game 6.

* In the 2009 Conference Semifinals, Scott Walker scored the overtime winner in Game 7 to power the Hurricanes past the Bruins, marking Carolina’s last postseason series win prior to the 2019 Stanley Cup Playoffs. Walker became the first player in Hurricanes/Whalers franchise history to score an overtime goal in a Game 7 – a feat Brock McGinn also accomplished in the 2019 First Round at Washington.

* The Bruins held a 2-1-0 edge in their three-game season series with the Hurricanes in 2018-19 (CAR: 1-1-1). Carolina donned vintage Hartford jerseys for two of those contests, including on Dec. 23, 2018 when Sebastian Aho (2-2—4) and Teuvo Teravainen (2-2—4) each collected four points to lead the Hurricanes to victory on Whalers Night at PNC Arena. 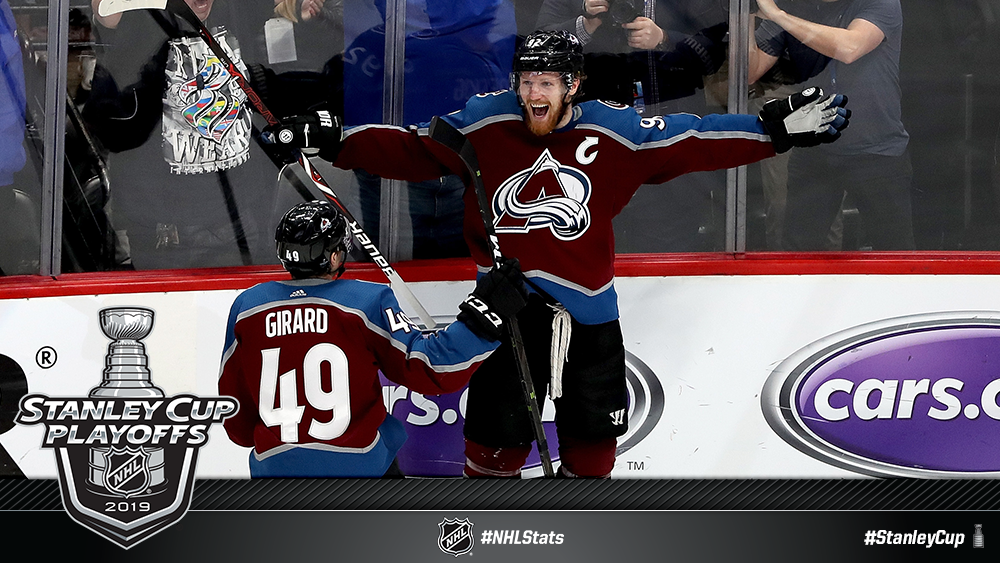 Marc-Edouard Vlasic (2-0—2) scored a tying goal with 2:28 remaining in regulation as San Jose overcame deficits of 1-0, 2-1 and 3-2, but Gabriel Landeskog potted the winner at 2:32 of overtime as the Avalanche defeated the Sharks to force Game 7. San Jose will host Colorado in the winner-take-all contest on Wednesday at 9 p.m. ET (NBCSN, CBC, SN, TVAS).

* The Avalanche became the 11th team in NHL history to stave off elimination despite surrendering three or more separate leads and first since the Bruins in Game 6 of the 2012 Conference Quarterfinals (4-3 OT W at WSH).

* Colorado improved to 3-0 past regulation during the 2019 Stanley Cup Playoffs, matching their regular-season win total in 15 games that ended in overtime. The line of Nathan MacKinnon (Game 2 of R1), Mikko Rantanen (Game 4 of R1) and Landeskog have accounted for all three of the Avalanche’s overtime goals in the 2019 Stanley Cup Playoffs after concluding the regular season ranking first, second and third place in team scoring, respectively.

* Landeskog became the fifth different player in Avalanche/Nordiques franchise history to score an overtime goal in an elimination game and first since Joe Sakic in Game 5 of the 2004 Conference Semifinals (2-1 OT W at SJS).

The Avalanche and Sharks will play in their 14th and 12th all-time Game 7, respectively, with San Jose competing in its second such contest of the 2019 Stanley Cup Playoffs (R1: 5-4 OT W vs. VGK). The Sharks will contest multiple Game 7s in a postseason for the second time in franchise history and first since the 1994 Stanley Cup Playoffs (CQF: 3-2 W at DET; CSF: 4-2 L at TOR).

* Colorado and San Jose will require Game 7 for the second time in five all-time head-to-head series. During the 2002 Conference Semifinals, Peter Forsberg – who potted the overtime winner in Game 6 – scored the only goal in Game 7 to power the Avalanche to a 1-0 regulation victory over the Sharks.

The Blues host the Stars at Enterprise Center in the fourth Game 7 of the 2019 Stanley Cup Playoffs as the Central Division rivals vie for a berth in the Western Conference Final. Two of the three Game 7s in the First Round were decided in overtime.


* The most recent Game 7 appearance for both came in their Second Round clash in 2016. St. Louis earned a 6-1 road win over Dallas, powered by 1-2—3 from then 20-year-old Robby Fabbri, who became the youngest player in NHL history to register three points in a Game 7.

* Stars goaltender Ben Bishop has recorded a pair of shutouts in his two career Game 7 appearances, both coming with the Tampa Bay Lightning in 2015. Bishop, who turned aside all 53 shots in wins over the Detroit Red Wings in the First Round (31 saves) and New York Rangers in the Eastern Conference Final (22 saves), became the first goaltender in NHL history to post shutouts in each of his first two career Game 7 appearances. He also joined Patrick Roy (2002, Colorado) and Tim Thomas (2011, Boston) as just the third goaltender in NHL history to record two Game 7 shutouts in one playoff year.

* The team that scores first is 129-46 (.737) in the 175 all-time Game 7s in the Stanley Cup Playoffs. However, the team to allow the first goal won two of three Game 7s in the 2019 First Round (San Jose and Carolina trailed 1-0 before winning; Boston won after scoring first).