Raiders Blow Doors Off Giants in Game 3 of WHL Final 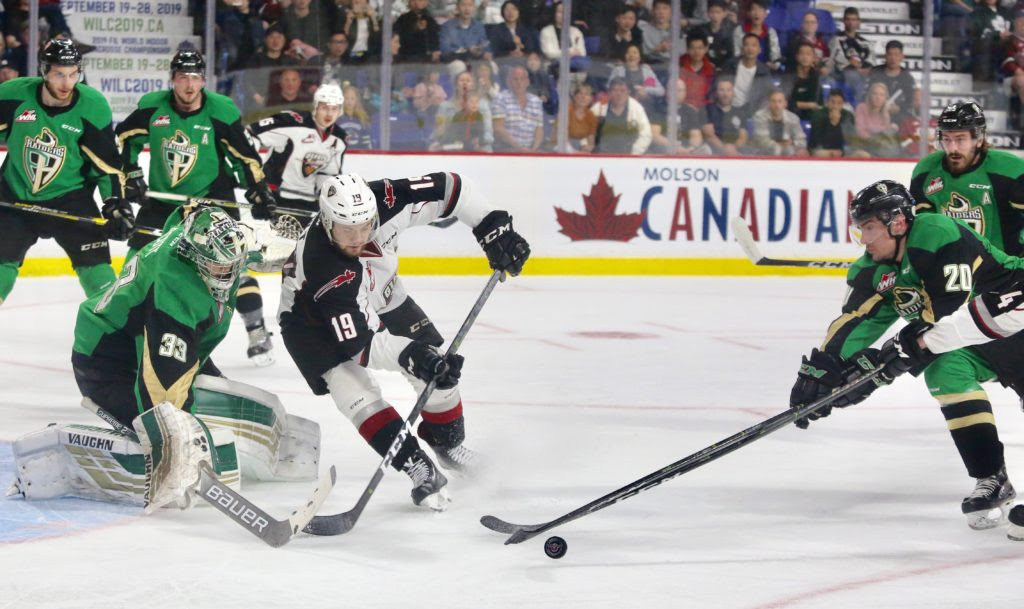 The Prince Albert Raiders erupted for seven goals in the first period en route to an 8-2 victory in Game 3 of the 2019 Rogers WHL Championship Series Tuesday at the Langley Events Centre in Vancouver, B.C. The Raiders now lead the best-of-seven championship series 2-1.

Kelly got his team on the board 41 seconds into the first period. Cutting to his left as he entered the offensive zone, Kelly used a Giants defender as a screen to beat the goaltender glove side. Moments later, Ozzy Wiesblatt redirected a pass out front, burying his fifth of the WHL Playoffs to double the Raiders’ lead.

The scoring continued two minutes later as 2019 NHL Draft prospect Aliaksei Protas connected on a pass with a streaking Leason. The Calgary, Alta. product then blew past a defender to score his first of the night.

“First period, I don’t know if I’ve seen that before,” March Habscheid, head coach of the Raiders, said. “We wanted to make sure we came out hard. We knew they were going to come out defending home ice and we just had a mindset that we didn’t want to wait around and see what they were going to do.”

A goal from Cole Fonstad, a prospect of the Montreal Canadiens, as well as the second goals from Leason and Kelly quickly swelled the lead to six, but the Raiders weren’t done there. Winning a face-off in their own zone with 24.3 seconds left in the first period, the puck got flipped down the ice. Noah Gregor, a prospect of the San Jose Sharks, caught up with it before out-maneuvering the Giants’ goaltender to score his 10th goal of the WHL Playoffs and increase the score to 7-0.

“It was a good start for the boys and I think that started us off on the right foot,’’ Kelly said of his team’s opening period.

The Raiders would add another goal in the second as a shot from Brett Leason was deflected through traffic by Hannoun, his third point of the game and league-leading 12th goal of the 2019 WHL Playoffs.

As part of Leason’s three-point night, he extended his point streak to six games, tied for the second-longest run in the 2019 WHL Playoffs. It’s the longest active streak of any player currently playing in the 2019 Rogers WHL Championship Series.

“The playoffs is another level and you’ve got to bring your game up,” Leason said. “To be on that point streak, I’m grateful for that and my teammates are helping me out along the way.”

To their credit, the Giants would respond with a pair of goals, though it wasn’t enough to wrestle momentum away from the Raiders in the contest. Brayden Watts took a feed from behind the net by Lukas Svejkovsky late in the second to break up the shutout bid. With 5:16 left in the third, 2019 NHL Draft prospect Bowen Byram slid a one-time pass to teammate Yannik Valenti to double their goal total.

“It just went from bad to worse,” Michael Dyck, head coach of the Giants, said in his assessment of Game 3. “We got on our heels, they generated some momentum, and it just seemed like everything they put at the net went in.

“It’s a series, we lost a hockey game. We didn’t have the first period we wanted, we’re down 2-1 in the series and we’ve got to be ready for Game 4.”

The 4,733 fans at the Langley Events Centre got a prime exhibit of the strength of both teams on the man advantage. The Raiders scored four of their eight goals with an extra man or two, while the Giants scored both of their goals on the power play.

Ian Scott, a prospect of the Toronto Maple Leafs, brought forth another strong performance in the blue paint, stopping 27 of 29 shots for the win.

Despite the complete team win, Habscheid insisted the journey for his team was far from over.

“We’re not here to win one game, we’re here to win a series,” Habscheid said. “We just go about our business and do our thing. We’ve just been trying to play the right way.”

Hannoun’s three-point night brought him even with Byram for the scoring lead in the 2019 WHL Playoffs, each with 23 points. Protas, Sergei Sapego, and Sean Montgomery each contributed a pair of assists for the Raiders in the victory.