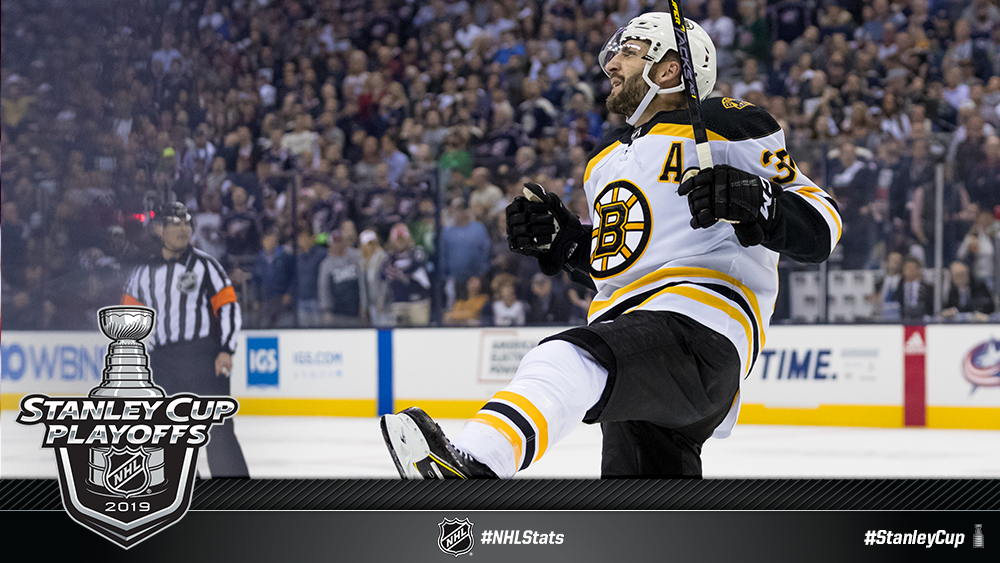 
* The Bruins and Avalanche each earned Game 4 wins to pull even in their respective Second Round series. The 2019 Stanley Cup Playoffs mark the fourth consecutive year in which at least three Second Round series will require no fewer than six games and the fifth time in six years since the division-focused format was introduced in 2014.

Patrice Bergeron scored twice including the winner and Dublin, Ohio native Sean Kuraly also found the back of the net against his hometown team to help the Bruins win Game 4 and even their Second Round series at 2-2. Boston, which suffered a 2-1 defeat in Game 3, improved to 4-1 following a loss in the 2019 Stanley Cup Playoffs.


* Kuraly, who played minor hockey with the Ohio Blue Jackets and also skated for the Miami University RedHawks, is one of 30 Ohio-born players in League history to appear in at least one NHL game (regular season and/or playoffs) – including one of 15 to debut since the Blue Jackets’ inaugural season in 2000-01.

* Kuraly has made a name for himself as a big-game player since making his NHL debut in 2016-17. His first two postseason goals were scored in Game 5 of the 2017 First Round in Ottawa, including the double-overtime winner to help Boston stave off elimination; he also collected 1-1—2 in Game 7 of the 2019 First Round as the Bruins eliminated the Maple Leafs.

* Kuraly became the eighth Ohio-born player in NHL history to score at least one goal against the Blue Jackets, joining Bryan Smolinski (8 G), Peter Harrold (2 G), Jeff Hamilton (2 G), Brian Holzinger (2 G), Mike Rupp (1 G), J.T. Miller (1 G) and Jack Roslovic (1 G). Kuraly, however, was the only one to do so in the Stanley Cup Playoffs.

* No players from the Buckeye State ever scored against the Cleveland Barons, who were active from 1976-77 to 1977-78. In fact, only one Ohio-born player ever played in a game against the Barons – Ab Demarco Jr., a native of Cleveland (3 GP).

* Additionally, Bergeron scored his 35th and 36th career goals in the Stanley Cup Playoffs to pass Don Marcotte, Ken Hodge and David Krejci (all w/ 34) and tie Ray Bourque for sixth place on the franchise’s all-time list. His 11 career power-play goals in the postseason also propelled him past Craig Janney, Rick Middleton and Krejci (all w/ 9) for sole possession of the sixth-most in Bruins history.

AVALANCHE BLANK SHARKS TO PULL EVEN IN SECOND ROUND SERIES

Nathan MacKinnon scored his League-leading third game-winning goal of the 2019 Stanley Cup Playoffs and Philipp Grubauer turned aside all 32 shots he faced as the Avalanche won Game 4 and pulled even in their Second Round series. Colorado improved to 3-1 at Pepsi Center in the 2019 postseason.

* MacKinnon shares the League lead with 13 points in the 2019 Stanley Cup Playoffs (6-7—13 in 9 GP) and has found the score sheet in each of the Avalanche’s last eight games, tied for the third-longest postseason point streak in team history (since 1995-96). 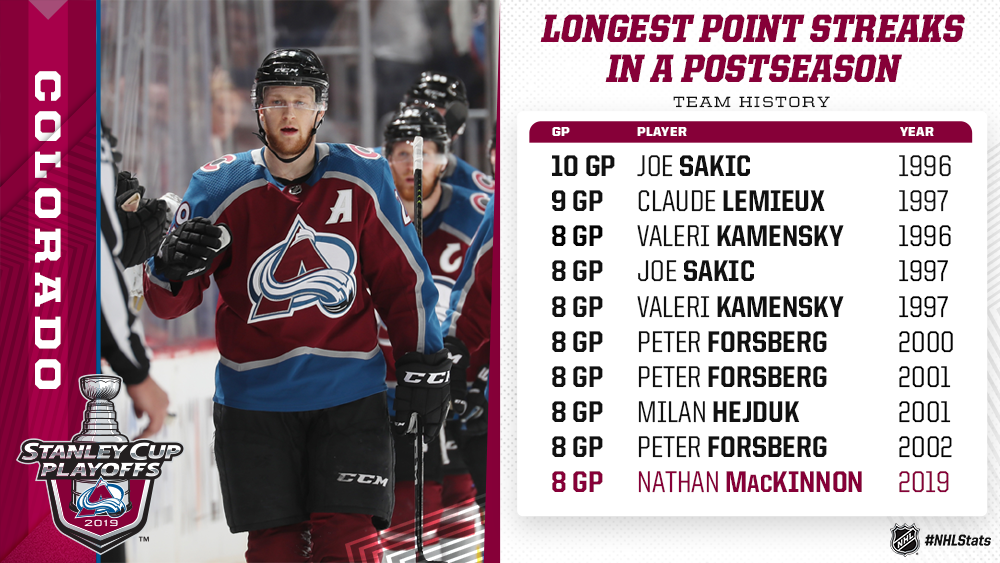 * MacKinnon’s six goals in the 2019 Stanley Cup Playoffs are the most in a postseason by an Avalanche player since 2004, when Joe Sakic had seven (7-5—12 in 11 GP). He also became the first Colorado skater to score three game-winning goals in a postseason since 2002, when Peter Forsberg (4) and Chris Drury (3) did so.

The Hurricanes look to become the first team to clinch a berth in the Conference Finals when they host the Islanders in Game 4 at PNC Arena. The Blues and Stars, meanwhile, shift to Enterprise Center in St. Louis with their Second Round series tied 2-2.

* Carolina can sweep an opponent for the second time in franchise history (and first in a best-of-seven format); the Hartford Whalers went 3-0 in the best-of-five 1986 Division Semifinals to defeat the Quebec Nordiques and earn the franchise’s first-ever series win in the Stanley Cup Playoffs.

* Carolina can become the second Wild Card team to clinch a berth in the Conference Finals since the division-focused playoff format was introduced in 2014; they would join the Predators (No. 2 Wild Card), who did so in 2017 en route to the franchise’s first-ever appearance in the Stanley Cup Final.

* Teams that take a 3-0 lead in a best-of-seven series own an all-time series record of 188-4 (97.9%); the Islanders, however, are one of the four teams in NHL history to overcome a 3-0 deficit and win a postseason series – doing so in the 1975 Quarterfinals against the Penguins.

* The Blues finds themselves tied 2-2 in a best-of-seven series for the 24th time in franchise history. They own an all-time series record of 7-1 when winning Game 5 in those 2-2 scenarios (87.5%), including a series victory over the Jets in the First Round. Their only series loss when winning Game 5 after splitting Games 1-4 was suffered against the Red Wings during the 1996 Conference Semifinals.

* The Stars are tied 2-2 in a best-of-seven series for the 24th time in franchise history and own an all-time series record of 10-1 when winning Game 5 in those scenarios (90.9%), including a series victory over the Predators in the First Round. Their only series loss when winning Game 5 after splitting Games 1-4 was suffered against the Blues during the 1972 Quarterfinals.
at 5/03/2019