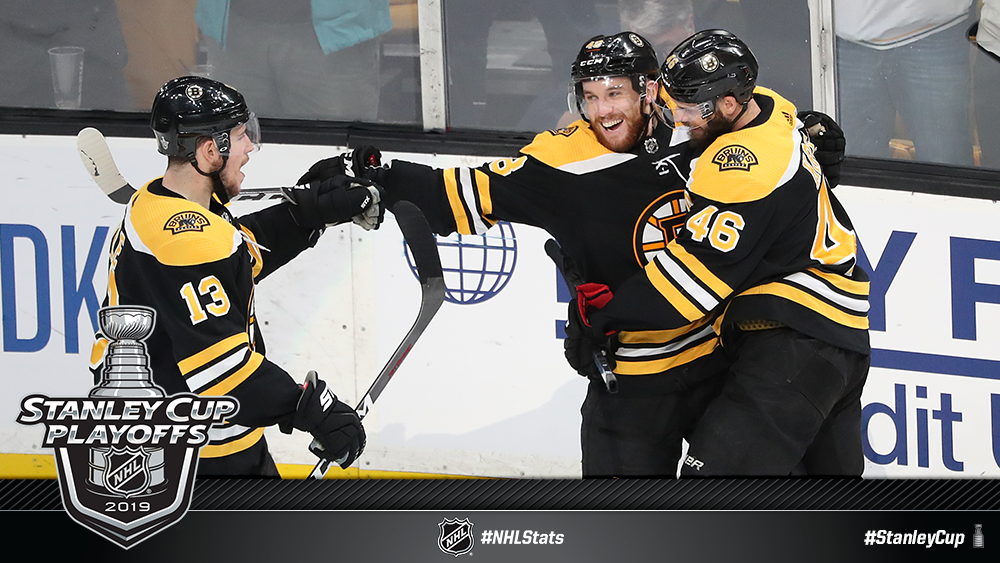 * Torey Krug and the Bruins defense led the offense as Boston secured its fifth consecutive playoff win and a 2-0 lead in the Conference Finals.

Bruins defensemen Matt Grzelcyk (2-0—2), Torey Krug (0-3—3) and Connor Clifton (1-0—1) combined for three goals and six points as Boston took a 2-0 series lead in the Eastern Conference Final. The Bruins earned their fifth consecutive playoff win, their longest win streak in a postseason since an equal run during the 2013 postseason.

* With chants of “We Want the Cup” echoing through TD Garden, the Bruins won the first two games in a best-of-seven series for the 32nd time in franchise history – winning 24 of the previous 31 series (77.4%). Since the conference format was adopted during the 1981-82 season, teams that take a 2-0 lead in the Conference Finals own a series record of 30-2 (93.8%).

* A Charlestown, Mass., native and former Boston University captain, Grzelcyk netted his first career multi-goal game in either the regular season or playoffs (155 GP). Grzelcyk achieved the feat in front of his mom, Kathleen, who was watching from the stands at TD Garden – where his father, John, has worked as a member of the changeover crew for 52 years dating back to the franchise's time at Boston Garden.

* Sunday marked the 14th time in Bruins franchise history in which defensemen accumulated at least six points in a playoff game and first since Game 2 of 2013 Conference Semifinals against the Rangers.

* Krug, who accounted for two of those six points against New York in 2013, registered three assists in a playoff contest for the second time in his career (also Game 2 of 2018 First Round). He became the fifth defenseman in franchise history with multiple such outings.

* Clifton, a fifth-round pick by the Arizona Coyotes in the 2013 NHL Draft, netted his first career goal (regular-season or playoffs: 29 GP). A four-year alumnus of Quinnipiac University, Clifton became Boston’s 19th different goal scorer of the 2019 Stanley Cup Playoffs, matching the franchise mark for most in a single playoff (also 19 in 1988).

* Did You Know? The Flyers featured an NHL-best 21 different goal scorers in 1987 en route to earning a berth in the Stanley Cup Final.

* Sunday’s contest marked the seventh playoff game in Bruins franchise history that defensemen have accounted for at least three goals -  a total that includes the suspended game during the 1988 Stanley Cup Final. The only contest with more goals by Bruins blueliners was Game 1 of the 1988 Division Semifinals.

After combining for nine goals in Game 1, the San Jose Sharks and St. Louis Blues will renew acquaintances again tonight at SAP Center. San Jose owns a 7-2 record on home ice this postseason, one shy of matching a franchise record for home wins in a playoff year.

* The Blues aim to tie the series at one game apiece – something they’ve done 13 times after losing the opener in a best-of-seven – before returning to St. Louis for Games 3 and 4.

* The Sharks, meanwhile, eye a 2-0 series lead for the 12th time in franchise history, owning a 9-2 series record in the previous 11 instances. They have won their last three such series – 2016 First Round and Second Round – but their two series losses in that scenario came when they had home-ice advantage (2014 R1 and 2006 CSF).