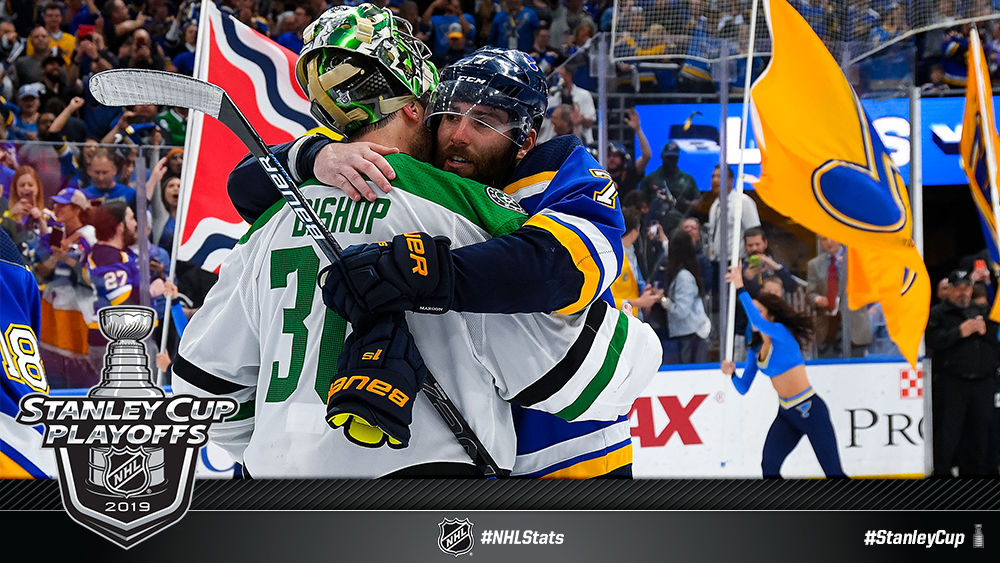 
* Stars goaltender Ben Bishop and Blues forward Pat Maroon both stole the show in their hometown, with the latter scoring the double-overtime winner to power St. Louis into the Western Conference Final.

* Tuesday’s winner-take-all showdown was the third Game 7 of the 2019 Stanley Cup Playoffs to require overtime, the most in one postseason in NHL history.

* Robert Thomas assisted on the Maroon winner to become the second teenager in NHL history to factor on a series-clinching overtime goal, joining 17-year-old Bep Guidolin over 76 years ago. 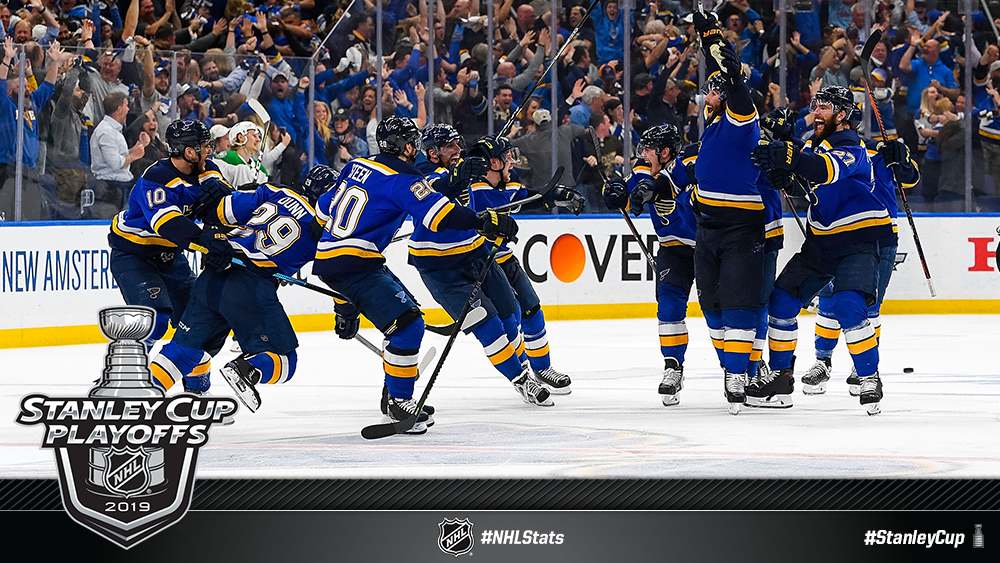 Stars goaltender Ben Bishop made 52 saves - including 48 consecutive stops over the course of five periods - but St. Louis native Pat Maroon scored at 5:50 of the second overtime as the Blues won Game 7 to advance to the Western Conference Final for the second time in the past four postseasons - replicating a feat they accomplished in 2016.


* Maroon, who opened up to Sportsnet about his decision to sign with his hometown team in order to be closer to his son, also became the third player in Blues history to net a series-clinching goal in a game that required multiple overtime periods. Schock’s goal in Game 7 of the 1968 Semifinals was the first such tally for St. Louis, with Mike Crombeen also accomplishing the feat in double-overtime in Game 5 of the 1981 Preliminary Round versus the Penguins.


* Aside from Maroon, Schock and O’Shea, only one other player in franchise history has scored an overtime goal in a Game 7: Pierre Turgeon in the 1999 Conference Quarterfinals at Phoenix.


* Maroon scored his second game-winning goal of the 2019 Stanley Cup Playoffs after also doing so in Game 3 in Dallas. He had three such tallies in 74 games during the 2018-19 regular season.

* St. Louis will face the winner of tonight’s Game 7 between Colorado and San Jose in the Western Conference Final. The Blues have faced both teams in the Conference Finals once before – suffering a five-game defeat to the Avalanche in 2001 and a six-game loss to the Sharks in 2016. Overall, St. Louis is 2-3 in five all-time head-to-head postseason meetings with San Jose and 0-1 in its one Stanley Cup Playoffs series against Colorado.


LOCAL BOY BISHOP LEAVES IT ALL ON THE ICE, TURNING ASIDE 52 OF 54 SHOTS

Stars goaltender Ben Bishop, who grew up in St. Louis and began his NHL career with his hometown team after being selected by the Blues in the 2005 NHL Draft, concluded his third Game 7 appearance with 52 saves. Despite setting a career-high for saves (and allowing a goal in a Game 7 for the first time), Bishop fell to 2-1 in winner-take-all contests (0.58 GAA, .981 SV%, 2 SO).

* Bishop made 18 saves in the middle frame to establish a franchise record for most in a period of a Game 7, eclipsing the mark of 16 set by Belfour in the second stanza during Game 7 of the 2000 Conference Finals. The franchise record for most saves in a period of any postseason game is 20, set by Belfour during the middle frame in Game 4 of the 2000 Conference Finals.

Blues rookies Jordan Binnington (29 saves) and Robert Thomas (0-2—2) were among the team’s top performers in Game 7:

* Binnington became the 24th different rookie goaltender in NHL history to win a Game 7 and second to do so with the Blues - Jacques Caron happened to do so against the same franchise in the 1972 Quarterfinals (2-1 OT W at MNS).

* Aside from Binnington and Caron, only two other goaltenders in franchise history (rookie or veteran) won their first career Game 7: Greg Millen in the 1986 Division Finals (2-1 W vs. TOR) and Brian Elliott in the 2016 First Round (3-2 W vs. CHI).

* Thomas (19 years, 309 days) assisted on both St. Louis goals, notching the primary helper on the series-clincher to become the second teenager in NHL history - and first in more than 76 years - to factor on a series-clinching overtime goal. The only other teenager to achieve that feat was 17-year-old Bep Guidolin in Game 5 of the 1943 Semifinals with the Bruins (0-1—1 vs. MTL).

* Only two other rookies in Blues history have collected multiple points in a Game 7, with Robby Fabbri the last to do so in the 2016 Second Round, also against the Stars. Fabbri tallied 1-2—3 to become the youngest player in NHL history to register three points in a Game 7 (20 years, 110 days at the time).

* Thomas became the second rookie in franchise history to factor on a series-clinching overtime goal, joining Doug Gilmour in Game 4 of the 1984 Division Semifinals (0-1—1 at DET).

* Forty-four Game 7s in the Stanley Cup Playoffs have required overtime (25%), including a record-setting three of four in 2019. Home teams are 23-21, including 2-1 this postseason.

The Sharks and Avalanche will cap a dramatic Second Round of the 2019 Stanley Cup Playoffs when they contest Game 7 at SAP Center.

* The Sharks will contest multiple Game 7s in a postseason for the second time in franchise history and first since the 1994 Stanley Cup Playoffs. In the decisive game of their First Round series, the Sharks became the second team in NHL history to overcome a three-goal, third-period deficit to win a Game 7, a 5-4 overtime decision against the Golden Knights.

* Sharks forward Kevin Labanc (1-3—4) factored on all four San Jose goals in the third period to become the first player in League history to record four points in a period during a Game 7. He also matched the NHL record for most points in any playoff period. San Jose's overtime hero was forward Barclay Goodrow, who joined Ray Whitney (2OT in 1995 CQF at Calgary) as the second player in Sharks history to score in overtime of a Game 7.

* The Avalanche will be appearing in a Game 7 for the first time since the First Round of the 2014 Stanley Cup Playoffs against the Minnesota Wild. The Avalanche led on four occasions (1-0, 2-1, 3-2, 4-3) but ultimately dropped a 5-4 overtime decision to the Wild, who became the first team in NHL history to record four score-tying goals in a Game 7. Five members of that Avalanche team remain with the club: Tyson Barrie (DNP in Game 7), Erik Johnson, Gabriel Landeskog, Nathan MacKinnon and Semyon Varlamov.

* Colorado and San Jose will require Game 7 for the second time in five all-time head-to-head series. During the 2002 Conference Semifinals, Peter Forsberg – who potted the overtime winner in Game 6 – scored the only goal in Game 7 to power the Avalanche to a 1-0 regulation victory over the Sharks.