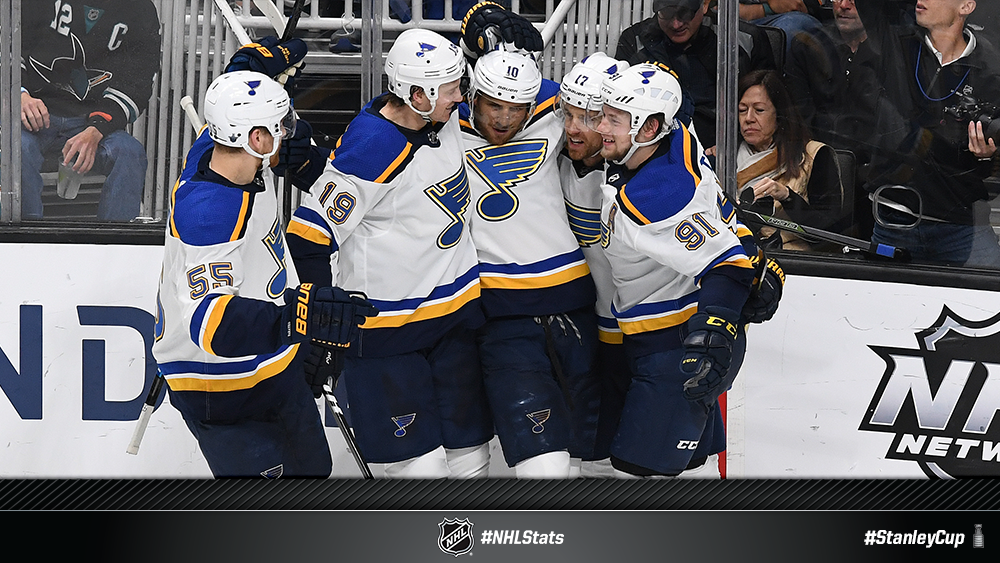 * The Blues, who held the No. 31 seed in the NHL standings on Jan. 2, moved within one win of reaching the Stanley Cup Final for the first time in nearly half a century.

BLUES ONE WIN AWAY FROM FIRST FINAL APPEARANCE IN 49 YEARS

After ranking last in the NHL on Jan. 2, the Blues – powered by Jaden Schwartz’s second hat trick of the 2019 postseason – now sit one win away from reaching the Stanley Cup Final for the first time in 49 years after posting a Game 5 victory in San Jose.

* St. Louis will return home for Game 6 on Tuesday with a chance to clinch its first trip to the Final since the League expanded to 14 teams in 1970-71. The Blues have made three Final appearances all-time, emerging from the all-expansion West Division in each of its first three seasons (1968-70).

* St. Louis moved to 7-2 as visitors this postseason and became the 18th team in NHL history to win at least seven of its first nine road games in a playoff year, a feat Washington also accomplished in 2018 (7-2) en route to capturing the Stanley Cup for the first time.

* St. Louis owns a 3-2 lead in a best-of-seven series for the ninth time in franchise history, owning a 7-1 series record in the eight previous instances. The Blues were in the same 3-2 scenario before two of their three trips to the Final, earning a seven-game triumph over the North Stars in the 1968 Semifinals and a six-game win over the Penguins in the 1970 Semifinals.

Blues forwards Jaden Schwartz (3-0—3) and Vladimir Tarasenko (1-2—3) as well as goaltender Jordan Binnington (21 saves) all achieved feats that had never been accomplished in franchise postseason history prior to Sunday.

* Schwartz scored the sixth hat trick of his NHL career and second of the 2019 Stanley Cup Playoffs (also 3-0—3 in Game 6 of R1 vs. WPG). He became the first player in franchise history to score multiple hat tricks in a postseason and first on any team to do so since Johan Franzen (2) in 2008 en route to capturing the Stanley Cup with Detroit.

* Schwartz became the second player in franchise history to score multiple playoff hat tricks at any point, joining Frank St. Marseille who posted a three-goal outing in 1970 and again in 1972.

Tarasenko became the first player in franchise history to score a penalty-shot goal in the Stanley Cup Playoffs. The only other Blues player to attempt a penalty shot in the postseason is Jimmy Roberts, who failed to convert against Minnesota’s Cesare Maniago in Game 4 of the 1968 Semifinals. 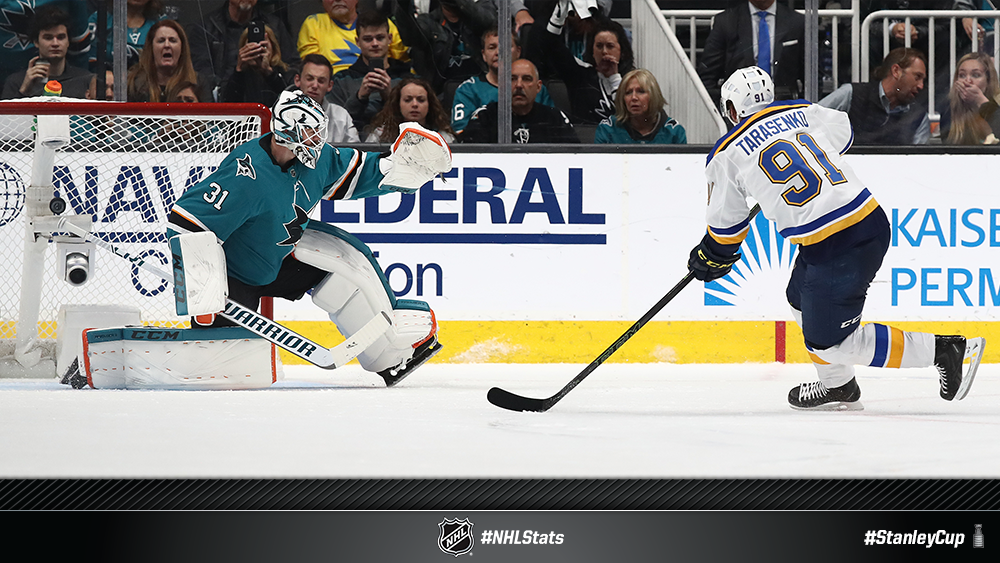 * After allowing five goals on 32 shots in Game 3, Binnington has stopped 50 of 51 shots in the 120 minutes since - including all 21 he faced Sunday to record the first rookie shutout in franchise history. He became the second St. Louis goaltender (rookie or veteran) in the last 15 years to blank an opponent in the postseason, following Brian Elliott in Game 1 of the 2016 First Round.

* The Western Conference Final will resume on Tuesday night with Game 6 at Enterprise Center in St. Louis.

BLUES AIM TO ACHIEVE AN NHL-FIRST

An NHL team has never gone from last place after their 20th game to Stanley Cup champion within a season. In fact, only four teams in the expansion era have reached the Final after ranking among the bottom three in the standings at any point after their 20th game: the 1968 Canadiens, 1968 Blues, 1991 North Stars and 2010 Flyers. The Canadiens are the only one of those clubs to win the Stanley Cup.

* Montreal ranked 10th of 12 teams with a record of 9-12-7 (25 points) after games played Dec. 15, 1967 (28 GP) before winning 33 of their remaining 46 contests to finish the regular-season first overall. The Canadiens then posted a 12-1 playoff record – including four-game sweep of the expansion Blues in the Final – to win the Stanley Cup for the third time in four years.

The Sharks will have to become the second team in NHL history to win three Game 7s to reach the Final; they would join the Kings, who did so in 2014 en route to capturing the Stanley Cup. Aside from Los Angeles in 2014, only one other team in League history has won three Game 7s in a postseason: Boston in 2011, who earned its third such victory in the Stanley Cup Final.