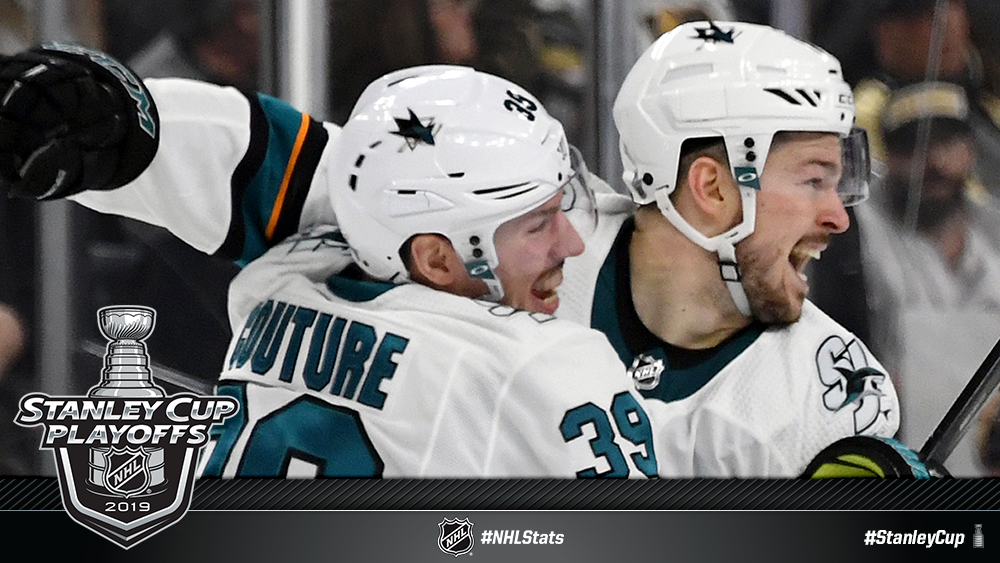 After the Sharks and Blues split the first four contests, the Western Conference Final shifts back to SAP Center in San Jose on Sunday for Game 5. When the Conference Finals/Semifinals are tied 2-2, the winner of Game 5 owns an all-time series record of 19-8 (70.3%)

* The Sharks find themselves tied 2-2 in a best-of-seven series for the 19th time in franchise history and second in the 2019 Stanley Cup Playoffs. They have gone on to capture the series in seven of the previous 18 instances, including a seven-game triumph over the Avalanche in the Second Round.

* The Blues are knotted at two games apiece after four games of a seven-game series for the 25th time in franchise history (9-15) and third time this postseason. They advanced in each of the opening two rounds after the series was tied 2-2, knocking off the Jets in six games and the Stars in seven contests.

* Additionally, the duo of Couture and Hertl have already established single postseason franchise records for home goals and now sit two shy of becoming just the sixth and seventh different players in the last 30 years to tally at least 10 goals on home ice - a list paced by Cam Neely’s 14 home goals with the Bruins in 1991, which tied Reggie Leach’s NHL record set in 1976 with the Flyers.

* Conversely, Blues forwards Jaden Schwartz (4-4–8) and Ryan O’Reilly (3-5–8) pace their teammates with eight road points in eight such contests this postseason. Only Bruins teammates Brad Marchand (5-5–10 in 8 GP) and David Pastrnak (4-5–9 in 8 GP) have collected more road points in the 2019 Stanley Cup Playoffs.

Captain Alex Pietrangelo has collected 2-10—12 in 17 playoff games in 2019, surpassing his previous postseason career high of 2-8—10 (20 GP) set in 2016. Pietrangelo sits one point shy of establishing a Blues franchise record for points in a postseason by a defenseman.

* Pietrangelo has proven to contribute when it matters most as a three-time champion on the international stage. He was a member of Team Canada’s gold medal-winning entries at the 2009 World Junior Championship and 2014 Olympic Winter Games and helped his country win World Cup of Hockey 2016.

Sure hope the Saskatchewan Blues beat the Bruins in the Stanley Cup Final this year!