A Tough 48 Hours Grieving With Humboldt 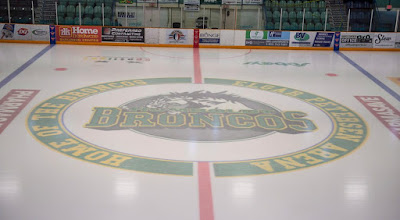 --In the business I am in, I am always supposed to be able to convey my thoughts and words.  I have been in this business for many years so this shouldn't be a problem.  When it comes to what happened on a small stretch of highway in northeastern Saskatchewan Friday afternoon around 5 o'clock,  I literally don't know what to say.

When I left the CKRM studios Friday afternoon, I was laughing because two of my younger co-workers had never seen an episode of WKRP in Cincinnati which is something all radio people need to see. On the way to my car, I took a picture of the hole where Lang's Cafe once stood and e-mailed back to the newsroom for a story. While doing that,  I saw the Red Deer Rebels bus drive down Broad Street and jokingly thought to myself, hey the Pats found someone to play while they are on their break and they've been busted.  Little did I know at that time about another bus.

As word trickled out about what happened to the Humboldt Broncos like you I was in a state of shock.  When I heard a report from the scene suggesting the magnitude, I don't even know if I can begin to describe it.  At first I heard 7 were dead which was devastating enough and then the texts came in saying double digit casualties with the unofficial word which became official just after midnight being 14 with that number going to 15 on Saturday.  It was very, very tough to not only compile the information for updates, but to not break down like so many were doing.  I won't lie.  The first update I provided had to be re-done because tears were streaming down my face and I could not get the information out without choking up. It took a couple of tries.

Making the drive back to the station, and driving home early Saturday morning so many thoughts went through my mind.  Like so many others in this province, I have been on the highways, in the rinks big and small.  I have travelled to those rinks on highways that weren't in great condition.  I've been doing what so many in this province has done. I was enjoying hockey!  I was enjoying the game and the people that make it the game we love. When I worked in Peace River, Alberta, I spent many hours on the bus of the Peace River Stampeders senior hockey team rolling down the road calling games. The fun that was had on that bus both going and coming from places like High Prairie, Manning and Valleyview were moments I still remember with a smile on my face. If you've been on that bus as many of us have, you know exactly what I am talking about.  On every trip I got home safely, that's what supposed to happen right?  Right? In this case wrong.

When I lived in Peace River, I remember a kid named Darcy that was a damn good hockey player. That damn good hockey player was Darcy Haugan. I think I interviewed him a time or two.   He said when he came back to Saskatchewan after coaching a team in Peace River,  he was listening to the Sportscage one night heard my voice and wondered if it was the same guy. In a conversation with my brother-in-law who used to work for the team, he found it was.   I saw him a couple of years ago just before a season was starting at the Co-Operators Centre, we chatted for a couple of moments before  I told him we had some catching up to do and to look after my brother-in-law and keep him in line.   That sadly won't happen!

When I worked for the SJHL, I had an opportunity to spend a good deal of time in Humboldt.  The league's Hall of Fame dinner was held there with an RBC Cup also taking place there.  While I knew about the tradition of the Broncos when I took the job, it didn't take long in the community to see what the Broncos mean to people there. It is the same as the Red Wings in Weyburn, the Mustangs in Melfort and the Bombers in Flin Flon.  It might technically be junior A, but to many in those locales much like it is across the country, it is the NHL. The bond between team and its town is a special one and it is a very special one in Humboldt.  When you think of Humboldt, you think of the Broncos.  That is the way it has been and it's the way it will be for years. Those that wear the uniform are seen as ambassadors and heroes to minor hockey players who some day want to pull that jersey over their head and be that player he grew up watching. Again, I know you know all this, but the hockey team in these places are the fabric of the community and at this time of year, they are the main focus of attention because they are trying to bring glory and a sense of pride to said community.

The last home game for the Broncos was one we can all see at this time of year.  The home team losing in triple overtime in front of a packed house. I can only imagine what it was like in the building both during and after the game. I can also imagine the excitement being felt as Game 5 approached with the possibility of being home for a Game 6 on Sunday. It was Saskatchewan in April because so many cities and towns have it.

Like you, I am still in a state of disbelief.  I am crushed. I have shed tears, and I will likely shed many more.  Darcy was the only one I directly knew and even then, I didn't know him well.  If I am feeling this way for people I don't know, what would I be going through if I knew them well----like the people of Humboldt who had daily interaction with the coaches and players.

This isn't supposed to  happen, but it did, and it did in our backyard. Why?  What the hell was that truck driver doing? I hope to god that those players didn't see what was coming at them at what obviously was a high rate of speed. One minute they were doing what they had to do to prepare for a must-win hockey game, the next their lives and the lives of many around them changed forever.  Why?  It's a question we can ask, but we will never get the answer.  Seeing the picture from the crash scene just made me stop and stare at my computer screen. A chill went down my spine, and I was somewhat nauseous. That picture is one I don't want to see again, and I know I'm not alone in that sentiment.  The devastation just leaves you numb.

I know Humboldt will recover, but I don't know when that will be.  It will take a long time. With the hockey season coming to an end, it is something that will fester all summer.  The Broncos will be back and when they are, the people of Humboldt will cheer them on the way they always have in the present and in the past.   Humboldt will bounce back, and they will do so with the support of many.

The fact that over four million dollars has been raised in a GoFundMe campaign shows that not only the hockey community reaching out showing its love and support for Humboldt, but so are people around the world who probably never even knew Humboldt, Saskatchewan existed until they heard the terrible news.

To see Ellen DeGeneres offer her support via Twitter, to see Reds first baseman Joey Votto and Blue Jays pitcher Marcus Stroman put "Humboldt Broncos" on their cleats and hats respectively and to see moments of silence at American US games played Sunday was incredible.  When tragedy hits, we are there despite the doom and gloom the world provides us with on a daily basis.  We are strong! We must move on. Many have a direct or indirect tie to someone directly affected. I know I do. We will move on and we will be strong, because we are Saskatchewan.

The people of Humboldt are already showing that.  They were gutted as a community Friday night, but 48 hours later they had come together for a vigil which was so well done.  To come together that quickly under the circumstances and plan something that would not be easy and have it go off the way they did was a nation watching was a sign. A sign that while Humboldt has been knocked down, they are going to get up.

We won't ever forget April 6, 2018 much like we won't forget December 30, 1986 and what happened to the Swift Current Broncos.  I just pray that we never have another day that we will never forget for all the wrong reasons.

That's all I got.  To Kevin Garinger, the Broncos organization, the families, the billets, the city of Humboldt, Mayor Rob Muench and many others who have been affected in what is the worst day in Canadian hockey history, you have the thoughts and prayers of myself and many with you. Words can not express the pain and sorrow that I am feeling for you, and that we are feeling for you. You will return and be stronger than ever.  I have no doubt about that, and either should you.


Think a lot of this are feeling the same way today.


Hockey means so much to communities like Humboldt. You are right, the Broncos are what you think of when you think of Humboldt much like the Red Wings in Weyburn and the Klippers in Kindersley.

They are the main focus of the town when it gets to this time of year.

I hope the Broncos can return next year and be the source of pride they have been for the past so many years.


Scruffy, seven years ago my father and brother passed away in an accident in Alberta. It took my family seemingly forever to come to grips with what had happened. We were in shock as you can imagine.

Even today, I can't go down the stretch of road where the accident happened because of the pain and memories.

To see Humboldt pull off what they did Sunday night with the pain still fresh in their minds amazes me. How could you do that? How could you do something that well-done in such a quick time when your soul has been ripped out of your heart? Would anyone have been surprised if Humboldt just put up a "We're closed until further notice" status?

Humboldt will be back and they will be stronger, but the scars will never leave. Those players, coaches and others will be remembered.


I've been through that intersection a time or two. Those trees blind your vision. You can't see a thing. If the bus missed the stop sign for whatever reason, that's it!


The worst day in Canadian hockey history is an understatement. No one has any idea what those kids could have gone on to do in hockey. My heart aches for all involved.