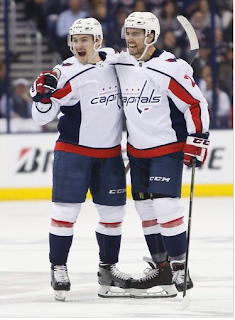 CAPITALS ADVANCE, WILL AGAIN FACE PENGUINS IN SECOND ROUND

Alex Ovechkin (2-0—2) eclipsed 50 career playoff goals as the Capitals defeated the Blue Jackets in Game 6 to advance past the opening round for the fourth consecutive postseason – the longest active streak in the NHL.

* The Capitals will now face the Penguins in the Second Round for the third straight postseason. Pittsburgh owns an all-time series record of 9-1 against Washington, which includes seven consecutive series victories dating back to the 1995 Conference Quarterfinals.

* Ovechkin, who scored career playoff goals No. 50 and 51, became the 60th player in Stanley Cup Playoffs history and just the sixth active NHL player to reach the 50-goal milestone. In doing so, he became the third player in franchise history to score twice in a series-clinching win (also Dale Hunter in Game 7 of 1988 DSF vs. PHI and Marcus Johansson in Game 6 of 2017 FR at TOR).

Mitch Marner (1-1—2) extended his postseason point streak to five games and Frederik Andersen stopped 32 of 33 shots – including 17 in the opening frame – as the Maple Leafs rallied from a 3-1 series deficit to force Game 7 in Boston on Wednesday.

* This marks the third time in sixteen tries that the Maple Leafs have forced a Game 7 after trailing 3-1 in a best-of-seven series. They are 1-1 in the subsequent Game 7s – rallying from a 3-0 deficit against the Red Wings to win the 1942 Stanley Cup Final and falling short in Game 7 of the 2013 Conference Quarterfinals against the Bruins – the last postseason meeting between the clubs.

* Marner recorded his third multi-point game of the series to extend his point streak to five games (2-6—8). He became the first Maple Leafs player to record a five-game point streak in the playoffs since Brian Leetch in 2004 (0-6—6 in 6 GP). Marner leads Toronto with 2-6—8 in the 2018 Stanley Cup Playoffs after finishing as the team’s leading scorer during the regular season (22-47—69 in 82 GP).

LOOKING AHEAD TO GAME 7
The First Round of the 2018 Stanley Cup Playoffs will conclude with Game 7 between the Maple Leafs and Bruins at 7:30 p.m. ET on Wednesday in Boston.

* Boston holds a 2-1 edge in three previous head-to-head Game 7 matchups vs. Toronto – including the 2013 Conference Quarterfinals when the Bruins became the first team in NHL history to overcome a three-goal, third-period deficit to win in a Game 7.