--The Nipawin Hawks are the Canalta Cup champions. 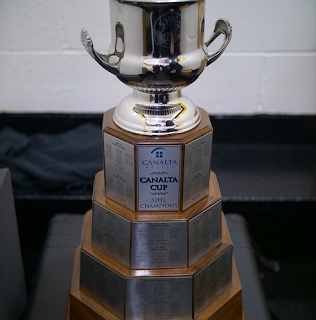 The Hawks won the SJHL crown on home ice beating Estevan 2-1 in Game 7.  They now play the MJHL champion Steinbach Pistons in the ANAVET Cup with the winner off to the RBC Cup.


--The Lethbridge Hurricanes will not be swept by the Swift Current Broncos.  Lethbridge got back into the WHL East final with a 5-1 win in Game 3. Brad Morrison had three goals for the Hurricanes who are now down 2-1 in the series.

--Taylor Hall is saying thanks, but no thanks. The New Jersey forward is turning down a chance to play for Canada at the World Hockey Championship. Hall has suited up for Canada three other times at the Worlds.

--You missed nothing when it comes to the Stanley Cup.  The first round ends Wednesday with the Leafs in Boston.  The league did release the schedule for Game 1 of the 2nd round on Tuesday.  The Pittsburgh-Washington series as well as the San Jose-Vegas series will start Thursday with the Winnipeg-Nashville series getting underway on Friday.  If Boston beats Toronto, they will start their series with the Lightning in Tampa on Saturday afternoon.  If the Leafs win, the game will go Saturday night.

-- Major League Baseball commissioner Rob Manfred said Tuesday that Rogers Centre is in need of an update. The downtown stadium has been the Toronto Blue Jays' home since June 1989.
"The stadium when it was built was a great building, one of our best," Manfred said. "I think given the passage of time, the building is probably out of date in terms of the amenities that are available in many of our ballparks. The physical design of the stadium — so many of our stadiums have millennial areas, things like that, that have been built and become more popular more recently.
at 4/25/2018


I've been to Skydome many times. Going to be pretty tough to "renovate" and make it what they want. Davidi had a great column on this a couple of weeks back on Sportsnet website.