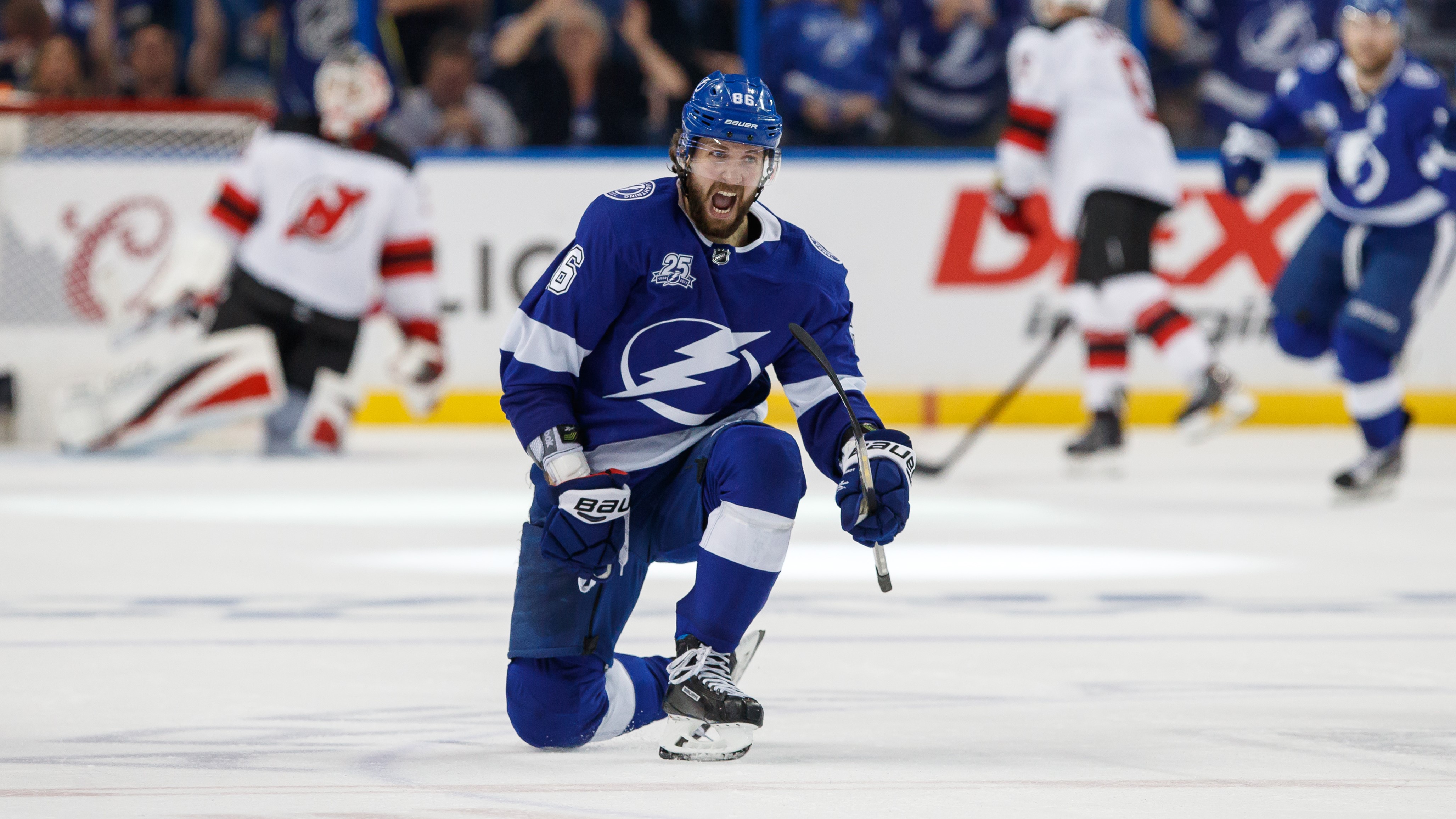 LIGHTNING ADVANCE AS KUCHEROV SETS FRANCHISE MARK
Nikita Kucherov scored the series-clinching goal with 7:33 remaining in regulation as the Lightning won Game 5 to advance to the Second Round of the Stanley Cup Playoffs for the third time in the past four seasons (also 2015 and 2016).

* Kucherov is tied for second in the NHL with 5-5—10 in the 2018 Stanley Cup Playoffs and established a franchise record for most points in a postseason series. He boosted his career playoff totals to 27-25—52 (all w/ TBL) to move into a tie with Vincent Lecavalier (24-28—52) for second on the franchise’s all-time postseason points list behind only Martin St. Louis (33-35—68).

The Lightning improved to 3-0 at Amalie Arena in the 2018 Stanley Cup Playoffs, outscoring the Devils 13-6 in those contests. Tampa Bay registered 29 home wins in the 2017-18 regular season, trailing only Winnipeg (32) and Pittsburgh (31) for the most in the NHL.

Lightning defenseman Mikhail Sergachev (19 years, 300 days) became the youngest player in franchise history to score a goal in the Stanley Cup Playoffs and the fifth teenager to do so in the 2018 First Round, joining Patrik Laine (2), Pierre-Luc Dubois, Nico Hischier and Nolan Patrick.

* This marks the first time five teenagers have scored a goal in the opening round of the Stanley Cup Playoffs since the 1991 Division Semifinals, when Jaromir Jagr (2), Steven Rice (2), Mike Craig, Keith Primeau and Robert Reichel did so.

* In fact, only one opening round in the NHL’s expansion era (since 1967-68) has featured more teenagers scoring at least one goal – the 1980 Preliminary Round, when seven players under the age of 20 each found the back of the net (Brent Ashton, Laurie Boschman, Ray Bourque, Wayne Gretzky, Tom McCarthy, Mark Messier and Mike Ramsey).

In a seesaw affair that saw no lead last longer than 5:48, Nicklas Backstrom (2-1—3) scored at 11:53 of overtime to propel the Capitals to their third straight win and a 3-2 series lead.

CAPITALS NO STRANGER TO OVERTIME

The Capitals required overtime in a playoff game for the 66th time in franchise history, tied for the ninth-most among all NHL franchises and third-most by any non-Original Six club. Thirty-five of those contests have occurred since the start of the 2008 Stanley Cup Playoffs, trailing only Chicago (38) for the most in that span.

* In fact, the Capitals have required overtime in 13 of their last 24 postseason games dating to Game 1 of the 2016 Conference Semifinals vs. PIT, including nine of their last 11 taking place in the First Round. Washington is the first team in NHL history to play a combined nine overtime games in the opening round of back-to-back postseasons.

* The 2018 First Round series between the Capitals and Blue Jackets is the 17th series in NHL history to feature at least four overtime games and the second for Washington in as many campaigns – their six-game series against Toronto in the 2017 First Round tied the NHL record with five overtime games. 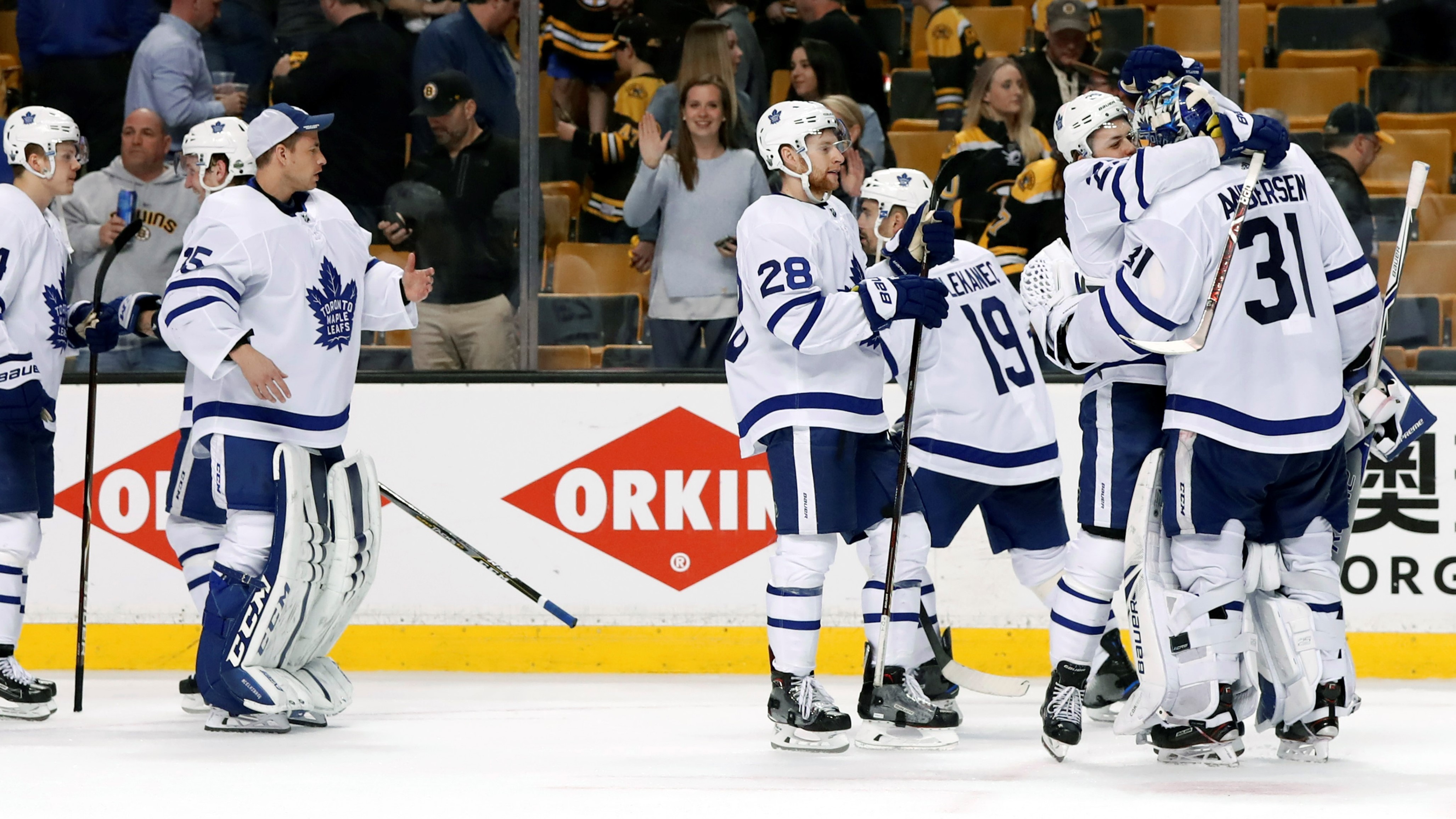 The Maple Leafs built a 4-1 lead by the 11:55 mark of the second period, including first career postseason goals by Connor Brown and Andreas Johnsson, before holding off a furious Bruins rally backstopped by 42 saves from Frederik Andersen to win Game 5 and cut their First Round series deficit to 3-2.

* The Maple Leafs own an all-time series record of 1-14 when facing a 3-1 deficit in a best-of-seven. Toronto rallied for its only such win in the 1942 Stanley Cup Final vs. DET – a series they trailed 3-0.

The Flyers and Avalanche each look to force a Game 7 in their respective series on the heels of dramatic Game 5 victories where they both scored a go-ahead goal in the final 90 seconds of regulation to avoid elimination. They are facing the Penguins and Predators, respectively, who are looking to advance to the Second Round and begin another long playoff run after meeting in the Stanley Cup Final in 2017.