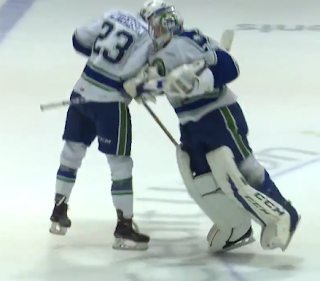 --The Moose Jaw Warriors didn't get it done-----again! What the h-e double hockeysticks was that in Game 7!  Yes, the Swift Current Broncos were the better team, but there was no pushback from the Warriors after Glenn Gawdin's goal late in the first period.  A team that had come back many times in the playoffs just seemed to say that's it once that goal went in.  I picked Swift to win the series, and I have had Swift Current to win the East and the league since before the playoffs started much to the disgust of some.  They were built for the playoffs and Moose Jaw seemingly wasn't---for the second straight year against Swift.  Give a lot of credit to Al Millar and Tim Hunter for building a team that won the Scotty Munro trophy, but as the Pats found out last year, that guarantees you nothing.  In fact, the SMT winner rarely wins the WHL crown.  As many told me who watched both the PA and SC series, MJ didn't turn it up come playoff time thinking they could just keep going the way they did in the regular season.  That obviously didn't work!

The question I have for Warriors fans is one I had for Pats fans last year.  With Regina having the success they had, the talk was "this is the best ever team they've ever had".  I said that honour goes to the 74 Memorial Cup championship team because they won and Regina didn't.  This MJ team was great, but they didn't get to the league final like the team that lost to Vancouver in 05-06.  That team got to the league final, this one didn't. I would have to say the 05-06 is still the one then.

WHL fans were spoiled thanks to the TV deal it had with SHAW.  We were able to see the Ed Chynoweth Cup final and many games until the ludicrous decision was made by SHAW to cut things like WHL and Canada West football.   While Access managed to broker a deal with IKS Media for Games 5-7 of the Warriors -Broncos series, it looks like WHL fans will be shut out of the conference final with perhaps the final as well.  In this day and age, surely we can find some way to get WHL playoff hockey into our living room. You can't stop now!  I thought the league said at the start of the year there would be a TV package.  The WHL in 30 is not enough at this time of year.


--Just to get this straight. The Knights had a four game sweep over L-A in which the total goals in the series was 7-3.  Boston beat Toronto 7-3 in Game 2 of their series.

--Nashville and Winnipeg are one game away from a second-round matchup against one another. Sign me up! That will be some good skatey-punchy as the guy in the commercial says.

--At the end of the day being an Oilers fan, I could care less about what the Flames do, but the firing of Glen Gulutzan is a sign of desperation.  Gulutzan didn't sign Jaromir Jagr, Gulutzan couldn't do anything about his team laying an egg when Mike Smith and Sean Monahan got hurt. Gulutzan did what he could with a team that thinks they are a lot better than they are.  He deserved better.  Some have suggested he would make a great assistant to Todd McLellan in Edmonton. If Todd stays, I'd be OK with that

--Cubs first baseman Anthony Rizzo like many are frustrated over the fact there have been so many games cancelled due to weather in April.  Rizzo is suggesting the baseball season start later and there be fewer games.  I would have no problem in starting baseball in mid-April and ending in mid-September.  The question I have is would players be happy if more doubleheaders were played and would owners be happy with less gates?  Cutting the season down by two weeks at the start and end of each season would be about 20 games.  You could play some doubleheaders to give you 150 games. The product wouldn't suffer.

--The Toronto Blue Jays had their game against Kansas City on Wednesday available only on Facebook. It wasn't on TV, it wasn't on MLB TV, it was only on Facebook.  Is this a sign of things to come? The younger generation is cutting the cord.  They are into the world of streaming and have no problems watching a game on their phone or a computer screen.  I understand that. I also understand that if I have a choice, I am going to watch a game on TV any day of the week.  Is the day coming that Twitter or Facebook can get a package of games from a major professional sports league and have those games exclusively. If that happens, we will be walking a very dangerous slope.   Some don't even have Facebook and have no desire to be on it. The same could be said for Twitter.  Thanks on this one, but no thanks.

--Speaking of Twitter, Stamps quarterback Bo Levi Mitchell announced this week he will not be bringing back his account because of the negativity social media can bring.  Mitchell had an entertaining Twitter account that showed some personality.  I am OK with that.  He chirped at Duron Carter and lost that battle with Rider fans ---fans whom he would troll coming back at him with full force. Did he yank his account or did the Stamps do it for him.  I'll let you decide on that one, but I know what way I'm leaning.

-- I can't be the only one surprised at the fact Bruce Campbell hasn't signed with anyone yet.


Seeing the oh-so-cocky Warriors lose was great! They deserved to get beat by PA. Where was Mr. 70 goal scorer in the playoffs.


The problems in Calgary lie much deeper than Gulutzan!


There will be some good hard skatey and some solid punchy if Jets and Preds meet in Rd 2!