What Did You Miss on Saturday? 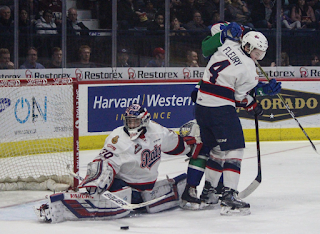 --They're going 7!  Cameron Hebig had a pair while Sam Steel and Matt Bradley scored their first of the playoffs as the Regina Pats forced a Game 7 in their WHL Eastern Conference first-round matchup with a 7-2 win at the Brandt Centre in what might have been the team's last game there until the Memorial Cup begins.  Game 7 will go Monday in Swift Current.

The Prince Albert Raiders stayed alive in their series with Moose Jaw with a 5-2 win. The Raiders look to force a Game 7 with a win on home ice Sunday night as they trail 3-2. in the series.

--The Vegas Golden Knights haven't even completed their first season and they have retired a number. Before their game against San Jose, the Knights retired the number 58 jersey.  58 were the number of people killed in a shooting at a country music festival in Vegas just before the season started.

--The Minnesota Wild may have suffered a huge loss just before the playoffs. It is believed defenceman Ryan Suter broke his leg during a game Saturday against Dallas.  The 33 year old has averaged just under 27 minutes a game ice-time this season and is the Wild's best Dman.

--Not to be for Lafleche.  Lucan, Ontario was named the winner of the Kraft Hockeyville contest.  This means that since the promotion started 11 years ago, there has still been no winner from Saskatchewan.

--Michigan and Villanova will play for all the marbles in the NCAA Men's Basketball Championship otherwise known as March Madness.  Michigan put an end to the run by Loyola-Chicago with a 69-57 win.  Villanova used a Final Four record 18 three-pointers to beat Kansas 95-79. The final goes in San Antonio on Monday.

--The win streak for Canada is over at the World Curling Championships.  The Canadian men and women had won 45 straight at the event dating back to the 2015 men's event, but Brad Gushue was beaten 8-7 by Scotland's David Mouat Saturday night.  Gushue opened with a win over Russia.