What Did You Miss On Saturday? 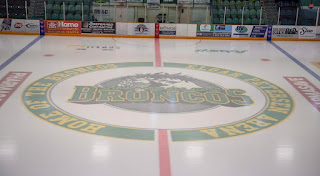 --Humboldt is in mourning, and not just the hockey world, but the world is feeling their pain.  On Saturday afternoon, RCMP announced a 15th person had been killed that was on the bus carrying the Humboldt Broncos to an SJHL playoff game in Nipawin on Friday

A GoFundMe page which was established hours after the crash Friday night had raised over two million dollars in a 24-hour span with many NHL teams paying tribute to the team in some manner Saturday night including Winnipeg where both the Jets and Hawks had the word "Broncos" on the back of their jerseys in place of their name.

A vigil will be held for the team Sunday at 7 at the Elgar Petersen Arena. Had the Broncos won the fateful Game 5 in Nipawin, the two teams would have played Sunday at 7 at EPA.  The vigil will be on Sportsnet.   Access Communications will also be broadcasting the proceedings.

--Swift Current earned a split of the first two games of their 2nd round WHL playoff series with Moose Jaw as they blanked the Warriors 4-0.  Stuart Skinner stopped just 20 shots to record the shutout.

--The NHL season isn't over, but the Rangers season is and so is Alain Vigneault's tenure with the Rangers.  The Blueshirts fired Vigneault Saturday shortly after their season ended with a loss to Philadelphia.  New York had 79 points this season and finished out of the playoffs for the first time since the 2009-10 season. On the ice, the 17-year careers of Daniel and Henrik Sedin came to an end as Vancouver was beaten in a shootout by the Edmonton Oilers.

--Minnesota/Duluth won the NCAA title beating Notre Dame in the final of the "Frozen Four". Two players on the Bulldogs hail from Saskatchewan--they are defenceman Jared Hilderman from Kamsack and forward Blake Young from the Battlefords.

--Patrick Reed goes into the final day of the Masters with a three-shot lead over Rory McIlroy.  Reed shot a 5 under 67 Saturday to take control as he looks for his first green jacket.