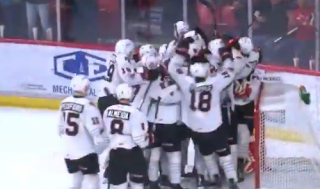 --It will be the Warriors and Broncos in Round 2 of the WHL playoffs.  The matchup many wanted came to fruition Tuesday night as Moose Jaw survived with a 5-4 win over Prince Albert.  After falling down early 2-0 to the Raiders, Moose Jaw fought back to take the lead at 4-3.  The Raiders tied it short-handed in the 3rd by a goal from Clayton Pachal, but Brayden Burke scored on the same power play just 30 seconds later at the 16:10 mark for the eventual game-winner.

--The Winnipeg Jets hit the 50 win mark. A 5-4 overtime win in Montreal gave them 50 for the first time ever. Kyle Connor continued his late push for the Calder Trophy with the overtime winner to go along with two assists.  Meanwhile, there was another questionable goaltender interference call in Florida as Filip Forsberg had a last-second game winner called off because of goalie interference.  The call prompted Carrie Underwood to send out a tweet saying she is livid with the NHL. 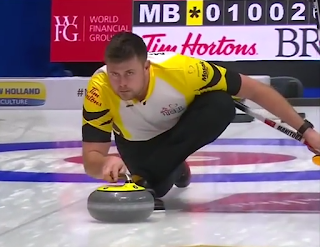 --Saying he would love nothing more than to wear the green jacket again and end this province's drought at the Canadian men's curling championship, Regina's Braeden Moskowy announced his new team on Tuesday on 620 CKRM's Sportscage.  Moskowy, who had been the third for the Reid Carruthers rink from Winnipeg the last four years, has formed a team consisting of Matt Dunstone, Catlin Schneider and Dustin Kidby.   Dunstone threw fourth stones for Steve Laycock and Team Saskatchewan in this year's Brier.

--Rider fans mark May 20th down on your calendar.  That is when 2018 Training Camp will start. For the 6th year in a row, camp will be held in Saskatoon.

--Golf fans will be tuned in Thursday morning starting at 8:42 AM Sask Time.  That is when Tiger Woods will tee off at the Masters.  He will be joined by Marc Leishman and Tommy Fleetwood.

--Giancarlo Stanton did not make a good first impression at home with New York Yankees fans.  He struck out five times much to the displeasure of Yankees fans who booed him even though New York won 11-4. Shorstop Didi Gregorius had two HR's and eight RBI's in the win. There was also a first in MLB as the game between the Cardinals and Milwaukee was the first in MLB history to start with back-to-back homeruns and end with back-to-back homeruns in a game Milwaukee won 5-4.


Was in MJ for Game 7. What a game! PA brought a couple of busloads in and when it was over, they were standing just like the MJ fans. MJ's goaltending will need to be a lot better against SC.


Did Moskowy say on the Cage that it costs 150 grand for a competitive curling team? It wasn't that way 20 years ago.

There are some businesses with deep pockets in this town. He will be fine! He's assembled a nice squad!